When friends of mine recently got norovirus from eating foraged Gulf Island oysters, my first instinct was a strange one. I blamed Victoria. 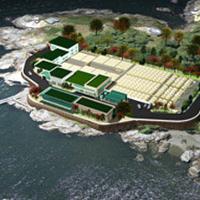 More specifically, I blamed Victoria's raw sewage, which is pumped out to the Juan de Fuca Strait at a rate of 130 million litres per day. British Columbia's capital is one of the last major cities north of San Diego to dump all of its untreated waste (including pesticides, street runoff and pharmaceuticals) into the ocean. On Friday, the sewer's screening system failed, spilling three million extra litres of unfiltered crap into Ross Bay.

It's something Washington state's governor writes strongly-worded letters about.

I've since learned my norovirus theory may be an overreach. But in asking, I stumbled upon two contentious questions: does anybody know how far Victoria's sewage travels? And how much of the city's problem can be chalked up to crappy optics?

John Werring, science policy advisor for the David Suzuki Foundation, says the Capital Regional District hasn't adequately measured how far poop and chemicals migrate. Using a partially-treated example out of Metro Vancouver, Werring told me the stuff can go a long way. "The effluent in Vancouver washes up past Howe Sound, all the way up to the Sunshine Coast," he says. "It's trackable, it's known and they've got maps -- the plume goes that far.

"Victoria thinks they're miraculously in a different situation."

When I relate this anecdote to the scientists tasked with monitoring Victoria's sewer situation, Chris Lowe and Glenn Harris of the Regional District's environmental protection division confirm the vast majority of testing happens within a few hundred metres of Greater Victoria's two major sewer outfalls. They test for a great many things -- heavy metals, bacteria, dissolved oxygen, hundreds more toxins -- but at a relatively short distance. Then they use computer models to extrapolate where it goes. This happens in weekly, monthly and quarterly cycles. Government guidelines don't require more remote testing, so they don't generally do it.

Lowe and Harris told me bacteria tests do routinely exceed water quality guidelines -- a problem that seems to be getting worse as time passes. Fecal coliform is a group of bacteria found in poop that can carry illness-causing pathogens like salmonella, E. coli and norovirus. Between tests in 2010 and 2013, the average fecal coliform count in Victoria's wastewater pipes went from 5.3 and 5.7 million bacteria per 100 millilitres of water up to 7.2 and 9.3 million bacteria per 100 millilitres of water.

For reference: B.C. guidelines peg safe levels at 200 fecal coliforms per 100 millilitres for recreational beaches, and 14 fecal coliforms per 100 millilitres for shellfish harvesting. Oysters, mussels and clams absorb these bacteria and pathogens and store them at higher concentrations than surrounding ecosystems. Sewage also depletes oxygen in water and acts as fertilizer for "red tide" algae linked to ocean acidification.

Harris and Lowe's model shows diffusion happens fast, a rate of about 1,580 to one. Mechanical diffusers keep a lot of the gross stuff deep below the surface, to limit the possibility of human contact. While annual reports show unsafe bacteria counts are still somewhat rare at the water's surface, mid and lower water column tests reveal an upward trend over time. At Esquimalt's Macaulay Point, for example, fecal coliform counts in the lower water column exceeded guidelines 11 per cent of the time in 2011. By 2013, tests exceeded the bacteria guidelines 75 per cent of the time.

How did it come to this?

On the island, there's still plenty of resistance to the idea of treating Greater Victoria's sewage. There are advocacy groups with acronyms like ARESST and RSTV that argue Victoria's waste is 99 per cent water, that benefits of treatment are disputable, and that the fast-moving strait adequately diffuses pathogen-carrying bacteria and toxic chemicals. In 2008 a group of eight ocean scientists wrote an op-ed in support of the "natural ecosystem service" over secondary treatment. The claim was that icky feelings and shame were ruining a perfectly serviceable wastewater system.

What's not disputable is the law: Victoria has been ordered by both the federal and provincial governments to clean up the mess. For over a decade, the two levels of government have agreed to split three ways on a wastewater management proposal dubbed the Seaterra Program. Now, there's about $500 million in non-municipal funding hanging in the balance with hard deadlines the city might not meet. Political players are no longer swayed by "natural service" arguments, or tax burden complaints. They're figuring out the whens and hows -- though it may be too late.

Nine years ago, The Tyee reported that a new $788-million treatment plant for the district was "all but a done deal." This followed decades of political pressure, including a Washington state-led tourism boycott in the early '90s and pleas from a local turd-mascot named Mr. Floatie.

Today, Victoria is further from building a waste treatment plant than it was in 2006. Esquimalt city council hammered the last nail into the Seaterra project's coffin when it refused to rezone a property to accommodate the seaside plant.

Why? I asked Esquimalt Mayor Barb Desjardins. "The request that came to Esquimalt was to build a facility that took it to the edge of the water," she explains of the plant's unfavourable specs, out to one metre from the shore. Desjardins cites tsunami and climate change concerns, and the township's regional growth strategy, as reasons to deny the project. She reads to me part of Esquimalt's community guidelines that pledge to protect the saltwater shoreline -- a feature "of regional significance" -- for recreational use. "At the end of the day, this use of that piece of property would not meet that," she said. The province didn't overrule.

The Capital Regional District has now split into "east" and "west" sewage camps. Colwood, Esquimalt, Langford, View Royal and the Songhees First Nation formed a "Westside Solutions" committee last fall beginning open houses Jan. 13. They want to look at other treatment technologies and maximize value for their communities. This month Victoria, Oak Bay and Saanich formalized a similar committee, with open houses yet-to-be-announced. They haven't announced a specific mandate, but Victoria's new mayor hints it's a far cry from "business as usual."

All parties have returned to the drawing board -- new technologies, locations and plant configurations are all on the table. A process called "gasification" comes up a lot, which I'm told uses steam to blow apart waste molecules, producing a usable fuel. So does the option to build more than one plant. Both of these prospects are likely more costly than the $788-million Seaterra proposal, and the pressure is on: provincial rules require the treatment system to be up-and-running by 2018. Otherwise city taxpayers stand to foot the entire bill, which could slide north of $1 billion.

Having recently inherited this portfolio, newly-elected Victoria Mayor Lisa Helps says she understands the gravity of the situation. "I want to take action on this, but I want to make sure the action we take has long-term high-quality impacts," she says. "In my opinion, the 2006 plan is dead in the water because the proposed treatment isn't good enough."

The Seaterra plant proposal would create a leftover sewage sludge, which would be piped to Hartland landfill and burned. Helps says the city can do better -- to put the waste to work, creating fuel and heat like other cities' modern waste treatment processes. That's where the gasification thing comes in. "My philosophy is that we could do a pilot project while we're making the longer term plan," says Helps. "From what I understand about gasification, it's off-the-shelf technology."

Desjardins echoes Helps. She says Esquimalt is aiming to finish the first stage of its consultation process by the end of January. "Although we feel it's ambitious," she says, "by the end of March we should come through with some sort of concept for the community."

With at least two or three more years to come before a completed treatment system is in place, it's helpful to consider the long view. None of this is news, really; Victoria's been pooping in the ocean for more than a century. 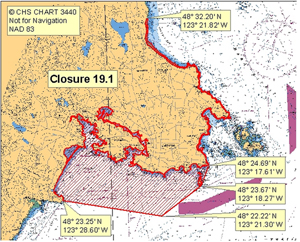 Shellfish harvesting is closed from Albert Head up to Cordova Bay. Has been since the 1990s.

In fact, Greater Victoria and its suburbs first began piping sewage into the Salish Sea from Esquimalt's Macaulay Point in 1915, exactly 100 years ago. There were some marks of progress along the way: they've added six-millimetre screens, which take out "the really horrible stuff," as Werring puts it, and the diffusers, plus that extra 1.8 kilometres of pipe.

And steps are being taken to address new concerns, too: Lowe and Harris say pilot studies on superbugs and microplastics are currently in the works. From what I learned from speaking with them, it's pretty unlikely that Victoria's pathogen-carrying bacteria would migrate as far as the Gulf Islands. To Trial Island, maybe. But not Pender or Galiano.

"Our models do not show any exceedances of the 200 [fecal coliforms] per 100 millilitres threshold outside of the existing sanitary closure area," Lowe wrote in a follow-up email, referring to Fisheries and Ocean Canada's shellfish harvesting ban. "Our models do show, however, that at certain times of the year under certain weather conditions (winter, heavy rains, high sewage flows), the shellfish threshold could be exceeded outside of the sanitary closure area 19.1, particularly to the east past Trial Island.

"We plan to undertake some field sampling to confirm the model predictions."

Having waded a little too far into this issue, I can say with some certainty the need for a treatment facility is real, and only growing more urgent. Human health risks are low today, but could fester and grow into something riskier. Victoria doesn't have another 100 years to wait this out.