Even though the Capital Regional District (CRD) has decided that its new $760-million wastewater and sewage treatment system should be mostly public, greater private sector involvement in the project continues to be pushed. 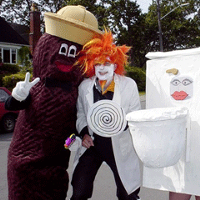 Meanwhile, a CRD board member says the report was only necessary to satisfy the provincial government agency Partnerships BC that the project can be done the way the CRD wants and that PBC is delaying the project.

"It is very surprising to learn that a private operating contract is now under active consideration," CUPE research representative Blair Redlin wrote in a Feb. 25 letter to members of the CRD committee who are working on liquid waste management.

Redlin was referring to a Feb. 23 report Ernst & Young Orenda Corporate Finance Inc. prepared for the CRD, PBC and the provincial ministry of community, sport and cultural development. The report summarized how 11 companies responded to questions about their interest depending on how the project proceeds.

But none of those questions asked specifically whether they would bid on a straight design-build project, like the CRD had approved, Redlin's letter said.

Instead they introduced the possibility of operating the facility, planned for McLoughlin Point in Esquimalt, for as long as 20 years after it's built.

"Would you bid the McLoughlin Plant with a 3 to 5 year operating contract which may be renewed by the CRD?" asked one question.

Another asked the companies to comment on the "pricing and risk transfer implications" of going with a 20-year fixed price contract where the CRD could get out after five years instead of a five-year contract.

Redlin said asking those questions made little sense, considering the CRD had already rejected including operating the facility in the contract.

"The CRD's decision to use traditional procurement methods was made after detailed review of financial, technical and social factors -- including extensive public input," he wrote. "The value for money analysis specifically determined that public operation combined with a design-build or design-bid-build construction model would be the most cost effective delivery method."

CUPE BC has an ongoing campaign aimed at keeping CRD sewage treatment public.

While it would make some sense to have a transition or warranty period once the facility is built, three to five years is a long time, Redlin said. "The private contractor would be responsible for all important operating requirements, including day-to-day operations," he said. "This is a proposal for privatized operation of wastewater treatment."

As for the 20-year operating contract the Ernst & Young report considered, "This is clearly way beyond the scope of the CRD Board decision." It's unclear why the option was even being discussed, he wrote.

He noted, however, that the report hinted at one reason politicians might prefer a short, renewable operating contract: "Having a long term operating contract has the potential to slow the project down, given the politics that go along with 'privatization', not often received favourably by the public. A shorter term project is an easier sell as part of the [design-build] project."

The renewable operating contract "is an obvious foot in the door for long term private operation of the plant," Redlin wrote.

Judy Brownoff, a Saanich Councillor and former chair of the CRD's Core Area Liquid Waste Management Committee said she's not as nervous as Redlin about including a temporary operating contract, but the details and limits should be tied down before any agreement is signed.

"It's kind of like a warranty period," she said. "We want to ensure all the components we get are viable."

Responses from the companies varied on the need for such a period, by the way, with some saying it was an appropriate length of time and others saying it would be longer than normal in similar situations.

In the long run the facility should be run by CRD staff, Brownoff said. "The CRD has the experience and knowledge to run wastewater and sewage treatment systems."

The provincial government set up PBC as a Crown corporation to assess and promote public private partnerships, where companies are given a greater role in delivering public services.

And with a federal election looking likely, it would be wise to get the federal commitment solidified as soon as possible, she said. There are also municipal elections scheduled for the fall and the new BC Liberal leader Christy Clark has said she will likely call an election before the 2013 fixed date.

The Ernst & Young market sounding repeats similar work done previously and was done to prove to PBC that the CRD's approach will work, said Brownoff. She said it confirmed that "people will bid on it."

A PBC spokesperson took questions Tuesday afternoon, but did not have a response ready by the end of the work day.

Brownoff also noted that the Ernst & Young report validated the CRD's decision to break the project into smaller contracts, despite PBC's push to take bids on the whole system, estimated to cost around $760 million.

"I think this will be the turning point with Partnerships BC trying to say 'one big P3,'" she said. "It's time to stop trying to push local government to a full P3."