British Columbia government officials, who were in discussions to set up an oil and gas sector-funded pool of money to pay for cleaning up toxic spills, suggested granting the natural gas sector an exemption, according to emails released through the province's freedom of information process. 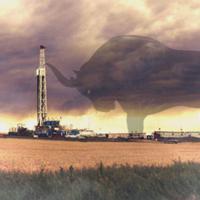 The Making of a Natural Gas Glut

The suggestion was made in an email exchange last March between a provincial environment official and two assistant deputy ministers. They were discussing which type of industries would be required to contribute to the proposed clean up fund. In one email, an official suggested that the natural gas sector be exempt from paying into the fund.

The official described the exemption as a "pass for natural gas." The gas sector would be exempt through a system that redefined what substances would be described as toxic.

"We are doing a redraft to suggest that contributing to the spill contingency fund and membership in the response organization would only be required for materials that are of high toxicity and persistence," wrote Jim Hofweber, the executive director of the Environment ministry's Environmental Emergencies and Land Remediation Branch in a March 11, 2014 email recently released through the province's freedom of information process.

In 2012, companies produced 3.5-billion cubic feet of natural gas in B.C., making the province the second largest producer in Canada, according to the Canadian Association of Petroleum Producers. CAPP says the industry is rapidly growing in B.C. and the provincial government is promoting a major expansion of the sector to provide liquefied natural gas for export.

B.C. operators of natural gas pipelines and compressor facilities would still need to respond to spills and report them, but they would be excused from paying into the proposed fund that would be used to clean up spills, wrote Hofweber.

The emails were written about one month before the province launched a public consultation process into its land-based response to spills. The public comment period ended in July. The environment ministry's website says a summary of responses will be posted shortly.

Same rules urged for every sector

An Opposition New Democrat said the emails suggest the government is considering letting some sectors off the hook.

Natural gas and coal may be less toxic than oil, Herbert said, but they can still have a big environmental impact depending where and when they are spilled. Last January, a freight train carrying coal derailed in Burnaby, sending seven cars into a tributary of a lake.

Herbert said the government's approach to "polluter pay" appears to be leaning towards making some sectors pay, but letting the public pick up the tab for the rest.

In the email exchange between with Hofweber and Standen, Mihlar appeared unclear on what materials could be described as toxic and asked for elaboration.

Mihlar continued, "I am not having much luck with coming up with any other language that will clearly protect the natural gas sector and the value added activities that the government is contemplating."

Hofweber responded: "I think we are in good shape with a pass for natural gas with our wording... As far as defining a toxicity threshold to evaluate other candidate materials, that will take work and consultation later on. I suspect most [gas-to-liquid] products would not make the grade on both toxicity and persistence."

In one email, Mihlar said he wanted to remove the proposed spill contingency fund -- which the Union of B.C. Municipalities and others had been pushing for -- from the table, but Hofweber said it had to remain part of the discussion.

"There is no way to justify that with stakeholders at this time," Hofweber wrote. "Even those who might oppose it need the opportunity to comment on why and what might serve in its place."

Nikki Skuce, the senior energy campaigner for Forest Ethics Advocacy, said natural gas should be fully included in the spill response regime. "This is supposed to be all encompassing," she said.

Skuce said the officials' subtle shift in wording when suggesting the natural gas sector be exempted from the fund is hard to detect even for those closely following the public consultation process.

"I missed that," she said. "To me that was an illuminating thing."

Environment Minister Mary Polak said the debate on spill response is looking at how various materials should be treated.

"We are trying to explore basing our response plans on risk, and of course the risk with respect to natural gas is very different, in fact much lower, than any other petroleum product," Polak said in an interview.

The government is trying to find a fair way to connect what's required of each sector to the level of risk it presents, she said.

However, Herbert said the public simply wants to know if there is a plan in place to respond to a spill.

He said the government emails considering a "pass for gas" reveal the degree of dealing that goes on behind the scenes.

"It's pretty galling, but not surprising given they've been saying one thing and doing another around 'cleanest LNG in the world' and 'world-class spill response,' " Herbert said.