A former investment banker says the explosion in shale gas development, such as frenzied activity in northern B.C., was a financial mania largely driven by Wall Street bankers intent on capitalizing upon a record $46-billion worth of mergers and acquisitions that shook up the troubled industry in 2011. 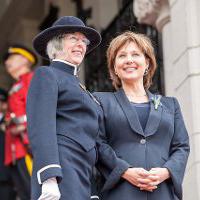 Will Dix Get Gassed by Clark?

In an attempt to meet unrealistic financial production targets (and please Wall Street), the industry drove natural gas prices to uneconomic lows in recent years, throwing the entire industry and its backers into panic mode, says Deborah Rogers in a startling new report for the Energy Policy Forum.

Rogers, who once worked as a financial consultant for Merrill Lynch and is a member of the U.S. Extractive Industries Transparency Initiative (USEITI), adds that shale gas reserves have been vastly overestimated and overhyped. Moreover, new data confirms rapid decline rates and poor recovery levels, which means limited revenue for resource owners such as the people of British Columbia.

As a consequence Rogers recommends that governments such as British Columbia that have actively served as cheerleaders for shale gas development with public subsidies need to urgently revisit their public policy.

Shale gas estimates are not only wildly optimistic, but shale gas fields are consistently under-performing with extreme environmental costs for rural communities.

"Every region in the U.S. which has shale development provides a cautionary tale," says Rogers. "Economic stability has proved elusive. Environmental degradation and peripheral costs, however, have proved very real indeed."

Moreover, the claim that shale gas will propel the continent to "energy independence" is a cruel joke, says Rogers. Multinationals are now scrambling to get governments to subsidize schemes to liquify and export the temporary gas glut to Asian markets for higher prices.

"Platform rhetoric about energy independence is nonsense as most people in industry recognize. … If shale developers can export their product to Asia where they will be paid multiples of what they can expect domestically, then that is where the gas will go."

The shale gas boom exploded in the mid 2000s as industry experimented with high volume hydraulic fracking in shale rock formations throughout the United States.

1. Wall Street promoted the shale gas drilling frenzy, which resulted in prices lower than the cost of production and thereby profited [enormously] from mergers & acquisitions and other transactional fees.

2. U.S. shale gas and shale oil reserves have been overestimated by a minimum of 100 per cent and by as much as 400 to 500 per cent by operators, according to actual well production data filed in various states.

4. The price of natural gas has been driven down largely due to severe overproduction in meeting financial analysts' targets of production growth for share appreciation, coupled and exacerbated by imprudent leverage and thus a concomitant need to produce to meet debt service.

5. Due to extreme levels of debt, stated proved undeveloped reserves (PUDs) may not have been in compliance with SEC [Securities and Exchange Commission] rules at some shale companies because of the threat of collateral default for those operators.

6. Industry is demonstrating reticence to engage in further shale investment, abandoning pipeline projects, IPOs and joint venture projects in spite of public rhetoric proclaiming shales to be a panacea for U.S. energy policy.

7. Exportation is being pursued for the arbitrage between the domestic and international prices in an effort to shore up ailing balance sheets invested in shale assets.

The controversial technology, which is more capital and energy intensive than conventional gas, allowed firms to access previously uneconomic deposits of gas and blast them apart with high-pressured volumes of chemicals, water and sand.

An investment frenzy then drove the price of natural gas to record highs and bid land parcels up to outrageous prices. Investment banks promoted the mania even though industry had at the time little or no data on the life, quality and productivity of shale wells over time.

Intense drilling resulted in a massive glut of natural gas that dropped natural gas prices to all-time lows, forcing highly indebted companies such as Encana and Chesapeake to sell off assets and do merger deals with foreign firms.

"It is highly unlikely that market-savvy bankers did not recognize that by overproducing natural gas a glut would occur with a concomitant severe price decline," explains Rogers.

"This price decline, however, opened the door for significant transactional deals worth billions of dollars and thereby secured further large fees for the investment banks involved."

As soon as operators realized the short life span of shale wells, they began to download assets in 2009. The primary players in one of the first shale gas booms, the Barnett play in Texas, including Encana, Range Resources, Chesapeake and Quicksilver Resources, sold off most of their assets by 2011.

In recent years Wall Street banks helped a wave of foreign energy companies including Chinese, Norwegian and Japanese firms buy up shale oil and gas leases across North America, even though too few wells had been drilled to assess their longevity and quality.

"Shale gas accounted for $46.5 billion in deals in the U.S. alone in 2011," explains Rogers. "The mergers and acquisitions market for shale assets exploded in the prior two years directly in sync with the downward descent of natural gas prices. In much the same way as mortgage backed securities bolstered the banks' profits before the downturn, energy M&A had now become the new profit centre within these banks."

Meanwhile, a variety of shale gas companies are beginning to post write-downs and losses while other firms have not renewed their leases or slowed down drilling altogether. Most firms switched to exploiting natural gas liquids in shale plays and then drove down the price of that resource too.

Although industry and government have trumpeted shale gas development as a miraculous economic engine that might even solve the common cold, the facts prove otherwise says Rogers.

"Retail sales per capita and median household income in the core counties of the major plays are under-performing their respective state averages in direct opposition to spurious economic models commissioned by industry."

Moreover, the capital intensive oil and gas industry creates a limited number of jobs. "Direct industry jobs (for onshore and offshore oil and gas) have accounted for less than one-twentieth of one per cent of the overall U.S. labour market since 2003, according to the Bureau of Labor Statistics," says Rogers.

In Texas, shale gas activity has cost taxpayers billions in road repairs and lost royalties as well as higher levels of air pollution and water contamination.

Shale gas is a classic energy bubble, concludes Rogers. It won't build any bridges to the future other than debt and a dangerous treadmill of accelerated drilling to keep production flat.

"The price of natural gas has been driven down largely due to severe overproduction in meeting financial analysts' targets of production growth for share appreciation coupled and exacerbated by imprudent leverage and thus a concomitant need to produce to meet debt service."