As next year's election approaches, the issue of child care has once again been raised, and experts say the trend of talking about who should pay to watch children while parents work has to be properly dealt with -- or Canadians are doomed to hear about it every election cycle. 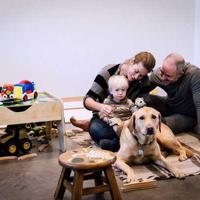 In BC, a Hellish Hunt for Childcare

Child care has been on the federal radar since as far back as 1970, when it was recommended by a Royal Commission, and made another notable appearance in 1988 when the Progressive Conservatives began tackling the issue, said one academic.

The trend continued Tuesday when federal New Democrat Leader Thomas Mulcair announced his party's plan for $15-per-day childcare across the country through a program similar to Quebec's.

Soon after the announcement, the Liberal Party of Canada issued a release blaming the lack of a national universal child care program on the NDP because the party voted to topple Liberal government in 2005.

The Conservative Party instead introduced a $100 per month child care benefit for each child to parents with kids under six years of age, and critics maintain the initiative has had no effect in helping parents obtain child care.

Later Tuesday, the NDP launched a counterattack with a so-called "reality check" against the Liberals for their earlier comments, pointing out that there were under 20 days left in the House before the election in 2005 was due to be held anyway.

"The NDP didn't defeat the scandal-plagued Liberals -- 70 per cent of Canadians did," said the party. "It’s absurd for Liberals to now argue -- after all the empty promises -- that all they needed was 19 more days to deliver on all the things they never did for 13 years."

Twitter thundered as partisans, pundits and the public mixed it up over the issue.

Argument will go on: prof

As it stands now, the impasse isn't going to disappear, said Dr. Allan Tupper who is head of the political science department at the University of British Columbia.

"It's an area of public importance; it's an area that Canada lags in," Tupper said. "The parties differ, particularly the Liberals and NDP compared to the Conservatives. You've got a fairly standard recipe here for the continuation of this issue. It never stops and elections just give it new focus."

Tupper said a large network of advocacy groups also play a part in keeping the issue alive, and that until something is established that is "broadly" accepted by the public, it will remain a top concern during election years.

Family relations professor Dr. Donna Lero at the University of Guelph said the discussion over dollars and cents needs to stop and affordable universal child care should be implemented across the country, insisting it's part of the social structure of any developed nation.

Lero said Canada has a "one step forward, one step back" pattern of child care discussion and solutions, where policymakers comes close to but never establish a program the majority of Canadians support.

But she said there are reasons for the failure.

"It is an expensive social program; it's one that's heavily labour intensive, and it was not part of the original (social) systems that were developed in the '60s" Lero said. "Over time there has been some real dichotomy in people's values about the role of government, the role of parents."

Child care costs in Canada can reach $1,000 a month per child depending on the region, according to a report from Child care Canada.

According to Lero, the lack of a national program adds to the list of ways young Canadians' needs are not being met, including the high cost of housing, student loans and a labour market that offers fewer long-term and stable jobs.

"And now you're asking them to pay these very high child care costs," she said. "It's really not a situation that's very conducive to young couples having children."

Lero has never had so many of her young students questioning or delaying when they will start families due to concerns over the cost of living and child care.

She doesn't know if the child care issue will be enough to get young Canadians out to the polls next year, but said the challenges young families face are starting to be recognized.

Meanwhile, the discussion on child care looks to yet again be a popular topic during the election, continuing with another New Democrat announcement on the issue expected in Vancouver on Thursday.