[Editor's note: It's an oft-repeated mantra: the job-for-life is over, today's economy requires workers to switch careers several times. Statistically, however, job turnover appears to have stagnated in recent years. And while it takes bravery to leave a job in uncertain times, it takes a special sort of courage to start from square one in a completely new field. In this four-part series, we share the stories of British Columbians who left behind career-defining jobs to pursue something completely different.]

At the peak of his 13-year career in consumer electronics, Eric Ho oversaw 200 engineers as the vice president of product development for a publicly traded Canadian company. After the firm folded in 2008, he branched off with his own start-up designing wireless products like phones and baby monitors. 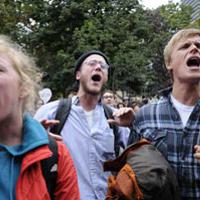 Despite a mortgage crisis and stumbling economy -- or perhaps because of a resulting economic stimulus package south of the border -- Ho's company found early success working for American contractors. But the job's long hours, travel and high stakes were no longer exciting.

"I found after three years my passion for that field seemed to be gone," Ho says. "When I signed a big contract, I didn't feel the same excitement or happiness anymore."

Ho's business took a financial hit in 2012 following the end of America's stimulus package, which squeezed out many of his customers. "Things were not looking that positive, which got me thinking further: should I struggle on or should I make a big change?"

Ho closed his business and spent two months looking for a new job in the tech field, but found he had "absolutely no interest" in what was advertised. A month after that, he experienced the "aha!" moment that led to him and his wife opening a bake shop on Vancouver's Commercial Drive.

Vancouver author Bruce Grierson has studied hundreds of hairpin career turns like Ho's. Author of the 2008 book U-Turn, Grierson sought to understand what makes certain people cast off their jobs and identities, even when costs outweigh the rewards.

In studying U-turners and their personal stories, many patterns emerged. Grierson says a major event like a global recession can be an escape hatch for workers like Ho who are ready to start something new.

"U-turns happen because the turners are ready for them to happen," Grierson writes. "These people are primed to respond. They are 99 per cent of the way there, but don't realize it."

Ho was lucky the recession didn't render his job redundant; it just squeezed him out of one version of it. And unlike many workers attempting a complete career turnaround, Ho had enough savings and resources to walk away by choice.

Even so, Grierson says the decisiveness and planning required to push in a brave new direction is rare, and requires outside forces to intervene.

"Sometimes people make up their mind, but for a lot of reasons they can't quite do it," says Grierson. "Sometimes you get a window: now's the time to do it."

At home, Ho's passions were obvious: he spent much of his time watching the food channel, looking up recipes and experimenting in the kitchen. His company's financial hit was the last straw, a reason to walk away and start over.

Ho snagged the last spot in 2013's spring enrolment at the Pacific Institute of Culinary Arts. He saw the six-month program as a trial period, time away from tech and engineering to test the waters of professional baking.

From day one, Ho and his wife knew they wanted to open their own shop. That meant finding a space, financing renovations, and managing a brand new team of staff. Ho thought, "If I'm going to do this, I'm going to work for myself at something that's my own, take the plunge and just go for it."

The culinary school enrolment, the training, all of it was exciting. But once Bakery Sate was finally open, the gravity of the hairpin turn quickly settled in.

"The lowest moment was the first week I opened," Ho says. "There was a week where it was so busy, so stressful, so overwhelming that I was asking: 'What have you gotten yourself into?'"

With over $850,000 of investment and financing -- Ho bought rather than leased -- Sate remains an experiment that has yet to prove profitable. But he keeps experimenting, continually testing new menu items and refining his daily baking regimen.

"I'm really good at math, and in baking there's a lot of math," he explains. "Coming up with recipes or scaling cakes, that really comes in handy."

Ho hired a fellow classmate as a pastry chef, and together they time out prep for croissants, muffins, cakes, bread and sandwiches throughout the day. He even developed his own blend of gluten-free flour and starch.

"I tried a lot of flours that you can buy off the shelf, but they're not satisfactory," Ho says. "So in the end I spent a few months at home researching, with my science background [doing] some testing as well."

Many of Ho's cookies, cakes and muffins use these alternative flours, though you wouldn't know it by the fluffy creations behind the glass.

The blend of white and brown rice flour, tapioca and potato starches "doesn't taste gluten-free," he says. "It's more the ratio of the flours that makes the difference."

Ho credits his tech background for his detailed planning skills and ability to tinker. "Using the equipment in the kitchen, troubleshooting it, and my background in the technical field has really, really helped."

One challenge of starting over, Ho found, was that nobody in his networks could offer guidance in the field. "The only two people I know were my instructors at PICA. I still keep in touch, but no mentors."

Grierson identifies the lack of such networks as one of the main deterrents to switching careers -- something he calls "golden handcuffs." Once workers establish a certain identity and expertise in one field, starting from scratch in another can feel like "blowing up your life," he says.

"It's a transition," Ho reflects. "Some days I feel like I'm still an engineer; it hasn't really sunk in that I am now a full time pastry chef."

Ho does find a partner in his wife, an account, who designed the bakery space. "She did a design course at BCIT, and we're both trying to pursue our passions."

While Ho seeks to make money in a new career he loves, he knows the salary he takes home will never be as high as that from his previous job. Grierson acknowledges this aspect of a career 180 can be painful.

"You put in your 10,000 hours to go back [to school] and take a pay cut and start over again, likely with people way younger," he says. "There's a level of humiliation."

Ho's aims are humble. "I think my aspiration is for this store to build up to the level where the business is stable, and at least make a small salary for myself," he says. "Still, I'm very encouraged every day when customers drop by, when they say 'A friend brought over this cake last night and it was so good' -- we have that feedback constantly."

For others contemplating a career flip, Ho recommends allotting some "buffer time" between gigs.

"I think taking time off from work -- a year or six months to really immerse yourself in a program or apprenticeship -- that can really help you distill that passion and ensure it's what you want for another 10 years."