One of Canada's premier scientific bodies has issued a critical report on the state of hydraulic fracturing in the nation, saying the industry has outpaced credible baseline data, scientific knowledge and necessary monitoring. 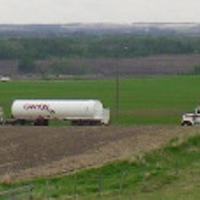 How Much Does Western Canada Subsidize Fracking?

Moreover, threats to groundwater are real and immediate due to stray gases migrating along leaky and abandoned wellbores, natural fractures in rock, and permeable faults, it found.

"These pathways may allow for migration of gases and possibly saline fluids over long time scales, with potentially substantial cumulative impact on aquifer water quality," noted the Council of Canadian Academies report.

Basic science on the 10-year-old brute force technology, which blasts rock formations open with water, chemicals and sand, remains in its infancy.

"The basic scientific knowledge needed to evaluate potential risks to groundwater on the regional scale is largely lacking," reads the report.

The 292-page report, chaired by John Cherry, a respected hydrologist at the University of Guelph, took a look at the technology's impact on water, human health, earthquake activity, well integrity, greenhouse gases and the land.

The report acknowledges that some of the most challenging impacts of hydraulic fracturing may take years to surface in communities and ecosystems.

"These include the creation of subsurface pathways between the shale horizons being fractured and fresh groundwater, gas seepage along abandoned wells, and cumulative effects on the land and communities."

Monitoring is currently inadequate, the report notes, but what has been done "indicates that gas leakage into aquifers and the atmosphere is frequent enough to raise concern. Given the likely future density of gas wells, shale gas development is expected to have a greater long-term impact than conventional oil and gas development."

Across the country, thousands of citizens have protested against hydraulic fracturing and provincial governments hungry for hydrocarbon revenue.

In Quebec, farm communities worried about the fate of communal aquifers and their livelihoods forced the government to pose a moratorium on fracturing.

In northern British Columbia, where industry has overwhelmed rural communities and First Nations, a bombing campaign against the region's most aggressive shale gas driller, Encana, resulted in a costly multi-million dollar RCMP investigation several years ago.

- Absence of important baseline information about both geological and environmental conditions in shale gas regions;

- Pathways, fate, and behaviour of industry-related contaminants in groundwater;

- Cumulative effects of development on communities and land;

And in Lethbridge, Alberta, protests by thousands of residents and local politicians yesterday defeated an application by an Asian firm to fracture formations under a suburb housing 10,000 people.

The report confirmed what many rural communities and B.C. First Nations have said for years: "The cumulative effects of the large number of wells and related infrastructure required to develop the resource still impose substantial impacts on communities and ecosystems."

Groups in eastern Canada, adds the report, "do not believe that their governments have the capacity to regulate the industry effectively and protect the environment while maximizing economic opportunities."

If shale gas development expands, and tens of thousands of wells are planned for Alberta and B.C., "the risks to quality of life and well-being in some communities may become significant due to the combination of diverse factors related to land use, water quality, air quality, and loss of rural serenity, among others."

Potential and documented impacts to groundwater "are not being systematically monitored, predications remain unreliable, and approaches for effective and consistent monitoring need to be developed."

An industry too far, too fast

In the absence of credible environmental baseline data, the report notes that industry has probably moved too far, too fast and the report endorses a "go slow" approach.

"In most instances, shale gas extraction has proceeded without sufficient environmental baseline data being collected (e.g., nearby groundwater quality, critical wildlife habitat). This makes it difficult to identify and characterize environmental impacts that may be associated with or inappropriately blamed on this development."

The report flagged well integrity as a problem, because all oil and gas wells leak as they age. But fractured wells have a tendency to fail more often due to the high pressures they must withstand.

"Information concerning the impacts of leakage of natural gas from poor cement seals on fresh groundwater resources is insufficient," said the report.

"The nature and rate of cement deterioration are poorly understood and there is only minimal or misleading information available in the public domain. Research is also lacking on methods for detecting and measuring leakage of GHGs to the atmosphere," added the report.

Given such liabilities and the fact that government may have to monitor leaky shale gas wells for decades, a recent German report on hydraulic fracturing advocated that the government "take it slowly and tread carefully," and conduct long-term basic research.

The report found that technological fixes may minimize some impacts, but not all of them.

"It is not clear that there are technological solutions to address all of the relevant risks, and it is difficult to judge the efficacy of current regulations because of the lack of scientific monitoring. The research needed to provide the framework for improved science-based decisions concerning cumulative environmental impacts has barely begun."

In its conclusion, the report notes that, "There are no vulnerability identification and management systems in place to identify those areas in Canada where hydraulic fracturing will be so risky that it should not be undertaken."

Thousands of approved wells in BC, AB

The report also makes some points that contradict other recent findings and developments.

It notes evidence on methane seepage from natural gas fields is "in flux," though other recent studies squarely challenge industry's claim that natural gas is a clean climate change fighter.

The report makes an error in stating that flaring or the burning of unwanted gas has declined in Alberta. According to a 2013 flaring report, the Alberta Energy Regulator directly attributes a 25.9 per cent increase from 2011 to 2012 in the disposal of flared waste gas into the air "to an increase in new crude oil production and low gas prices, which makes the economic viability of conservation more challenging."

The regulator blamed the increase in flared gas to "the number of horizontal multistage fracturing operations in 2012. It takes longer to recover load fluids and clean out wells in these operations, which results in greater flare volumes and flaring duration."

The Tyee has reported the error to the Council of Canadian Academies and is waiting to hear back.

The report also states that "it is recognized that Canadian regulation and accepted practices are somewhat more stringent" than U.S. oil and gas regulations, though Canada's regulators are 100 per cent funded by industry.

The Alberta Energy Regulator recently abandoned many cases of clear-cut contamination of wellwater by methane from oil and gas activity with no explanation.

It is currently arguing in court that it owes no "duty of care" to landowners.

Although the report champions the importance of baseline data, regulators have hindered that possibility by approving thousands of fracked horizontal wells in Alberta and B.C.

Environment Canada asked the Council of Canadian Academies, a not-for-profit organization that supports evidence-based expert studies on public policy issues, to conduct the study more than a year ago.