It might be the most important mining rush you've never heard of -- certainly, it's among the planet's strangest. The location is the northern Canadian wilderness, where resource firms are competing to extract a flaky mineral that might someday help solve climate change, revolutionize electronics and cure cancer. 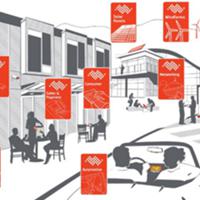 BC's Role in the Next Huge Phase of the Internet

The mineral they're after is a high-quality form of graphite. No, not the lower quality variety that goes into the end of your pencil. Large, undeveloped graphite deposits in Ontario, Quebec and elsewhere in Canada could be tapped to make a wonder material proponents say will shape the next industrial revolution.

That material is graphene, a substance 200 times stronger than steel, so thin it's considered two-dimensional and extraordinarily conductive of heat and electricity. In 2010, the two researchers who isolated it were awarded the Nobel Prize. Now scientists across the world are competing to patent new uses for graphene, setting off, in the Wall Street Journal's words, "a scientific gold rush."

If even a fraction of these applications become widespread, global demand for the high-quality flake graphite used to make graphene would soar. That might in turn create a vexing geopolitical dilemma for the United States, which mines no natural graphite of its own, and imports more than 50 per cent of its current supply from China.

Resource firms looking to mine Canada's graphite deposits see an emerging market opportunity: supply America with graphite, help reduce Chinese imports and partner with high-tech developers like Grafoid to produce and profit from graphene. Could their gambit, as industry tracker Marko Spasenovic has speculated, be quietly transforming Canada into a "graphene superpower"?

Canada moved one step closer to that reality this September, when Lomiko Metals, a Surrey, B.C.-based junior mining company that owns graphite properties in northwestern Quebec, made a surprising announcement. "It's been a quiet summer," read an article on Graphite Investing News. "Now, however, Lomiko is ready to reveal what it has been up to."

Graphite is mainly prized these days for its role in making the lithium-ion batteries used by electric cars, smart energy grids and various mobile devices. That's why Lomiko was originally attracted to the mineral. But its focus changed once CEO Paul Gill found out about graphene's seemingly infinite possibilities. "You're looking at a huge potential market," he said in an interview.

Earlier this year, Lomiko partnered with Graphene Laboratories, a New York-state based tech firm attempting to accelerate graphene's entry into the marketplace. The two companies first met "through Twitter, of all things," Gill explained, after Lomiko began tweeting infographics it'd made on the wonder material's potential to "change everything" about modern life.

"[Graphene Labs] sent me a note saying, 'Did you just send out 100 tweets on graphene?'" Gill went on. It was in some ways an unlikely match: a West Coast resource explorer accustomed to Canada's rugged outdoors, paired with East Coast scientists more comfortable in lab coats. But graphene right now is expensive to produce, and Lomiko's graphite deposits offer a chance make it cheaper.

Which is in effect what the two companies announced this September. Using mineral samples from Lomiko's Quatre Milles property in Quebec, Graphene Labs was able to produce some of the first ever graphene made from Canadian graphite. "We are very pleased," said Elena Polyakova, the firm's CEO and a respected graphene scientist. "We hope to use [Lomiko's] graphite to reduce costs." Gill sees their efforts in larger geopolitical terms.

China right now produces up to 80 per cent of the planet's graphite, and has imposed export restrictions. The U.S. mines no graphite (but does produce a petroleum-based synthetic variety with a heavy carbon footprint). Canada's current output, meanwhile, is not of sufficient quality for graphene. "People will realize our importance very quickly," Gill said of Lomiko and Graphene Labs. "That we have a way to... take over supply of the [North American] market from China."

A cure for cancer?

Some of the talk these days about graphene sounds like it came straight out of science fiction. "This one's really way out there," is how Grafoid vice-president Dr. Gordon Chiu prefaced his description of the Ottawa-based technology firm's latest project. Early this September, Grafoid partnered with ProScan RX Pharma to develop a cure for prostate cancer that requires no surgery, radiation or chemotherapy.

By combining cancer-targeting antibodies with graphene, researchers have created a "biological computer chip," claimed a recent summary, that can search the human blood stream for "cancerous prostate cells and destroy them with a flash of red light." Someday, Dr. Chiu speculated, such technology "could double your life" and enable astronauts to reach new frontiers in "space exploration".

But he's the first to admit graphene-based cancer treatments are unlikely to be realized, if ever, for a decade at the very least. Perhaps more promising in the short-term is the firm's partnership with Hydro-Quebec's Research Institute, which addresses one of the major factors holding back mass adoption of electric cars: bulky, inefficient batteries. Current models only power your car for so long, and take hours to charge.

That problem could potentially be solved with graphene. Built into electric cars, the material's thinness and conductivity could transform the entire industry, allowing vehicles to charge up in mere minutes, or even seconds. Earlier this summer Grafoid and Hydro-Quebec claimed to have made progress towards that goal, filing a patent for a new graphene-based composite that could enable, they claimed, an electric car battery "the size of an orange."

It adds to the more than 9,200 graphene patents filed since the wonder material's discovery in 2004. But Grafoid is different from most players in this so-called "scientific gold rush." The firm is owned in part by Focus Graphite, a Canadian junior mining company, whose Lac Knife property in Quebec contains, it claims, some of the planet's highest quality graphite. Should Grafoid's cancer and climate solutions ever prove viable, Lac Knife could provide the graphene needed to mass-produce them.

Partnerships like these between Canadian graphite miners and tech firms are being watched closely in the graphene world. Last spring, industry tracker and nanophotonics scientist Marko Spasenovic cited them as evidence that "Canada is emerging as a real 'graphene superpower.'" At this point it's still hard to measure.

"If Marko sees it that way, that's interesting," said Keith Blakely, co-founder of the Buffalo, New York-based Graphene Stakeholders Association, which hosts its first-ever annual meeting later this month. "Particularly because he's not Canadian." Still, Blakely has reason to feel skeptical. Though scientific interest in graphene right now is extraordinary, commercial demand for it outside of a few niche industries is small.

Part of that is a function of graphene's high price (which most observers expect will eventually come down). And partly it's because the material is so new. Researchers are still figuring out its properties. Standards are lacking. Potential markets for it haven't yet adjusted. "Like most things that have come out in the advanced materials arena," Blakely explained, the arrival of graphene into our daily lives "will be a subtle transition."

Soon to hit markets though will be graphene-based inks, he predicts, capable of printing electronic circuits, and drastically reducing the price of solar power. Another is reinforced plastic with properties of metal. Samsung's efforts to develop flexible touch-screens are also promising. And afterwards: Who knows? University of Texas scientists are experimenting with graphene-based invisible cloaks. Graphene is being studied as well by the U.S. military. "The potential for products that are hard to imagine today certainly does exist," Blakely said.

If and when graphene finally hits the mainstream, Lomiko Metals and Focus Graphite (as well as competitors like Northern Graphite and Ontario Graphite) could find themselves at the centre of a graphite boom in Canada's north. Might they also help transform Canada into a "graphene superpower"?

"I don't think it's something that's going to replace [Canada's] oil and gas in dollar value," Blakely said. But, he adds, "It probably bears paying attention to."