The Green Party's biggest gains in the May 14 election seem to have come at the expense of the Liberals. 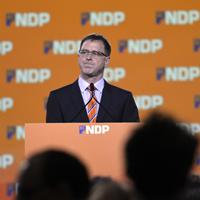 In a Greenless World, Would the NDP Have Won?

During the campaign, the New Democrats seemed obsessed with losing votes to the Greens. The Liberals even tweaked the NDP by running a pro-Green newspaper ad in Victoria near the end of the campaign.

Maybe the Liberals should have saved their money.

The final count shows the five ridings where the Green vote increased the most were all in southern Vancouver Island. And in four of those ridings, the Liberal vote dropped more than the NDP vote.

One popular theory holds that the Greens steal votes from the NDP. If that were true, you'd expect the Greens' gains to come at the expense of the NDP in these ridings. But that doesn't seem to have happened.

In Oak Bay-Gordon Head, where Andrew Weaver won the Greens their first seat ever, the Greens picked up 8,392 more votes than in 2009. At the same time, the NDP vote dropped by 3,780.

But the Liberals, who won the seat in 2009, saw their vote drop by 4,110. Those votes don't seem to have gone to the Conservative party, which is usually assumed to be the biggest vote-splitting threat to the Liberals. The Conservative vote increased by only 492 over 2009.

The numbers suggest that the Greens pulled a lot of support from former Liberal voters.

The overall number of valid votes in Oak Bay-Gordon Head increased by 994, or four per cent, suggesting that Weaver's support didn't all come from new voters.

The Greens' other big increase came in Saanich North and the Islands, which also went Liberal in 2009. This time, after all the ballots were counted, the NDP took this riding in a close three-way race.

Overall, the vote in Saanich North and the Islands increased by 2,365, a hefty eight per cent over 2009.

James won this riding easily. Still, the Green vote increased by 4,641. The NDP vote dropped by 840. And the Liberal vote dropped by 1,997. Again, there was no Conservative.

Overall, the vote in Beacon Hill increased by 1,615, or seven per cent.

The table at the bottom of this page shows the 13 ridings where the Green vote increased by more than 1,000 over 2009. In about half of them, there was a substantial drop in the Liberal vote.

So what does all this mean?

On the face of it -- despite the argument that the Greens split the centre-left vote -- Green votes don't appear to have all come from the NDP. Their gains, it appears, often came at the expense of the Liberals.

Immediately after the election, this reporter looked at a scenario based on a world where there were no Green candidates and all their votes went to the NDP. While a lot of readers seemed to think I was arguing that such a world would be desirable, I meant it as an exercise to gauge the strength of the Green vote.

If you want to argue that the Greens cost the NDP the election, you have to assume that the overwhelming majority of Green votes were drawn from the NDP. That doesn't seem to be the case.

(And as I said then, assuming that all Green votes would otherwise go NDP "ignores an important point that often gets missed when people talk about vote-splitting: third parties like the Greens wouldn't exist if their supporters found what they were looking for in the main parties.")

The Liberal losses we've looked at also fit with something Chad Skelton noted in the Vancouver Sun. In the May 14 election, the Greens ran only 61 candidates, down from 85 in 2009.

As Skelton points out, if the Greens were NDP vote-splitters, you'd expect the NDP vote to go up in the ridings where there was no competition from the Greens.

That could be because something else changed in the riding that caused the NDP support to drop, he notes. This exercise isn't conclusive, "but it certainly undermines the argument that the Greens are simply spoilers for the NDP," says Skelton. "If that were the case, you wouldn't see figures like these."

The results from the ridings where the Greens made their biggest gains aren't conclusive, either. But they do suggest that the whole vote-splitting thing is a lot more complex than a lot of people make it out to be.