NDP candidate David Eby had a cordial discussion last week on a Kitsilano street corner with a pro-HST shopkeeper, a demographic not known for its support of the centre-left party. 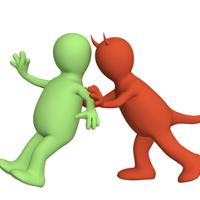 Gerry Lewarne, owner of the Crocodile Baby Store, had nothing good to say about Eby's rival in Vancouver-Point Grey, Premier Christy Clark, and suggested that most other merchants along Fourth Avenue share his negative opinion.

"I'm not overly impressed by her," remarked Lewarne, after saying goodbye to Eby whose riding could be -- because of Clark -- the ultimate swing riding in the May 14 election.

"Personality and character are important in the people we will elect," said Lewarne. "I don't know David Eby very well, but certainly, when you look at the causes he's been involved with, it appears as though he has character."

This scene is just a snapshot, and the election is six weeks away. But the small businessman's counter-intuitive comments reflect recent polling, which set Clark's approval rating at an abysmal 27 per cent and gave the New Democrats a 20-point lead over the BC Liberals.

Officially the BC NDP is taking nothing for granted, and think the polls will tighten during the campaign.

But party insiders believe that nearly all the seats the NDP currently holds are safe. And they expect most of the seats they lost last time by small margins of a few hundred votes will fall like dominos onto their side.

NDP strategists also believe the strong anti-Clark sentiment puts into play many seats, including Vancouver-Point Grey, which previously leaned BC Liberal and where the New Democrats lost by margins of a few thousand votes.

Eby, the high-profile civil libertarian and anti-poverty lawyer, needs to bridge the 2,300-vote gap between the party's previous candidate in Vancouver-Point Grey and former premier Gordon Campbell in 2009.

NDP leader Adrian Dix, having the whip hand, is expected to spend the election's initial weeks in ridings currently held by the BC Liberals. Clark will probably be on the defensive, campaigning in swing ridings where her incumbents are most vulnerable.

Barring a dramatic turnaround in the campaign, Dix will be seeking not just a government, but a strong province-wide mandate with seats in every region. Clark will be trying to salvage enough ridings for the Liberals to survive and fight another day.

Dix is expected to spend time in Vancouver-Point Grey, and Eby was joined at his Kitsilano stop last week by Victoria-area MLA Rob Fleming.

"I think the NDP is going to be competitive in regions where we either haven't ever had an MLA, like in Chilliwack, or in places where we haven't had an MLA in 20 years or so," said Fleming.

Former BC Liberal strategist Martyn Brown said the NDP benefits from having an "efficient" vote, one that is more evenly distributed in swing ridings.

"Our vote on the BC Liberal side has never been as efficiently distributed," added Brown, saying that the centre-right party racks up huge majorities in some ridings, such as West Vancouver, Vancouver-Quilchena, Richmond and some of the Fraser Valley seats.

Former premier Campbell's chief of staff added that the NDP's potential vote universe is close to 60 per cent of the electorate. "It's bigger than it was 10 or 15 years ago, and it was always bigger than people recognized."

Another factor working against the BC Liberals is motivation. How do you excite would-be supporters and volunteers when the polls offer little hope?

"Apathy is a killer," said Brown. "Especially when you know it's over and you can't win."

With all that in mind, here are The Tyee's top 10 swing ridings to watch:

1. Vancouver-Point Grey: The NDP hasn't held this affluent riding since 1991, when Darlene Marzari was sent to Victoria in the Mike Harcourt victory. Former premier Campbell won four consecutive victories here, but his victory margins were moderate -- except for the 2001 anti-NDP blowout. Eby nearly scored a shock upset win in the 2011 byelection, losing to Clark by only 564 votes. The NDP expects, based on the polling, to move beyond its usual base here of renters, left-wing university professors, and baby boomer professionals and retirees who attend the Vancouver Folk Festival. A former Campbell fundraiser in Point Grey was seen at a recent Eby dinner, which says something.

2. Kamloops-North Thompson: This has long been considered the bellwether of bellwether ridings. An old adage of B.C. politics is that the governing party always has at least one of the two Kamloops seats. Terry Lake, a veterinarian who became the BC Liberal environment minister, only won the last election by 510 votes. His NDP challenger Kathy Kendall, a long-time Kamloops lawyer who represented low-income clients, has the time-for-something-new wind at her back. A strong showing by the BC Conservative candidate Ed Fehr would further reduce Lake's re-election prospects.

3. Oak Bay-Gordon Head: This is perhaps the most fascinating swing riding in B.C. The Green Party's strength on southern Vancouver Island and the high profile of its candidate, University of Victoria climate scientist Andrew Weaver, have turned this into one of B.C.'s rare three-way races. BC Liberal incumbent Ida Chong only won last time by 561 votes in this posh riding against NDP challenger Jessica van der Veen, a former actor-turned-community activist, who is back again. Pollsters say Weaver will draw as much from the BC Liberals as the NDP. The question is whether Weaver will become B.C.'s first Green MLA or be a spoiler.

4. Prince George-Valemount: BC Liberal Attorney-General Shirley Bond has won three straight elections, but the desire for a change in government could overwhelm her name-recognition advantage. Prince George, just like Kamloops, tends to switch to the winning side in elections. The NDP really wants a seat in Prince George to beef up its regional representation in the Interior. The New Democrats had seats here when it held power in the '90s. Lingering resentment in the Interior over the HST and any rise in the Conservative vote could hand this riding to NDP candidate Sherry Ogasawara, a long-term Prince George resident and community dietician.

5. Vancouver-Fairview: This is a classic swing riding where the last three elections have been close. This year's contest features two heavyweights: BC Liberal Health Minister Margaret MacDiarmid and George Heyman, the veteran government employees union leader and Sierra Club executive director. Heyman is bound for cabinet if he and the NDP wins. But Fairview is affluent enough that NDP victories here do not come easy. Gregor Robertson only won in 2005 by about 900 votes. Still, this should flip to the NDP unless the race tightens up significantly.

6. North Vancouver-Lonsdale: The BC Liberals have long ruled on the North Shore. But this riding has been the most-NDP friendly of the area's four seats. BC Liberal incumbent Naomi Yamamoto faces a tough challenge from NDP candidate Craig Keating, a popular long-time city councillor and college instructor. Keating ran unsuccessfully in the riding in 2005, losing by about 1,000 votes. But NDP momentum could give him an edge.

7. Chilliwack: The New Democrats won the adjacent riding of Chilliwack-Hope for the first time ever last year thanks to vote-splitting on the right. The NDP hopes to do it again in this Bible belt riding, which they have also never held. The BC Liberal candidate, John Martin, had nothing good to say about his party last year, when he was the Conservative candidate in Chilliwack-Hope. "The BC Liberals are in free fall," he declared last spring. But Martin has changed his tune in this contest, which pits the college criminologist against NDP candidate Patti MacAhonic, former executive-director of the Chilliwack Chamber of Commerce, and Conservative Chad Eros. Again, the NDP will need a strong Conservative showing for MacAhonic to come up the middle.

8. Langley: This one features a battle on the right between provincial Conservative Party leader John Cummins and BC Liberal Transportation Minister Mary Polak. Cummins' natural political constituency is Delta, which he represented for many years federally. But Delta South independent MLA Vicki Huntington took that away, so Cummins switched to Langley, where he now resides, in his bid to become B.C.'s first Conservative MLA in over three decades. The New Democrats took 35 per cent of the vote here last time. It's a long-shot scenario, but an even vote split on the right could flip this traditional bastion of small-c conservatism to NDP candidate Andrew Mercier.

9. Vernon-Monashee: If any of the seven Okanagan seats could flip to the NDP because of a vote split on the right, this is it. BC Liberal incumbent Eric Foster was in political hot water recently after being criticized by outgoing B.C. Auditor-General John Doyle over renovations and leasing arrangements at his Vernon office. Doyle also said that Foster should have recused himself as chair of the legislative committee that denied his reappointment as auditor-general. Foster's opponents, New Democrat Mark Olsen, a school board employee, and Conservative Scott Anderson, a Vernon businessman, have attacked Foster over the controversy. Foster beat Olsen last time by five percentage points.

10. Abbotsford South: Incumbent MLA John van Dongen's candidacy as an independent candidate makes this an intriguing three-way race. The mercurial van Dongen quit the BC Liberal caucus last year after 15 years and then joined the Conservatives, which he abandoned months later. The BC Liberal machine nominated criminologist Darryl Plecas after preventing city councillor Moe Gill from running. The controversy in the South Asian community over the nomination could hurt Plecas in his battle with van Dongen and NDP candidate Lukhvinder Jhaj.