Three Paths to BC 2013 Election Glory

If the New Democratic Party's path to victory in British Columbia's May 14 election looks like a stroll down a Surrey sidewalk, the Liberals have been wandering around somewhere near the bottom of Mount Fairweather, lost in the fog. 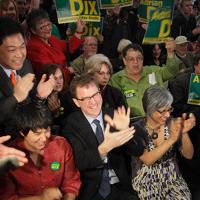 Here's how Bernard von Schulmann, whose observations of provincial politics are available on the BC Iconoclast blog, put it in an interview: "It's really bad for them."

Since the 2009 election, won with what turned out to be an inaccurate budget and followed with the surprise introduction of an unpopular and now rejected harmonized sales tax, the Liberals have trailed the NDP in 23 of 26 Angus Reid Public Opinion Polls and in nine out of 11 polls taken by the Mustel Group.

Aggregating recent polls, Éric Grenier on his website ThreeHundredEight.com forecasts the Liberals as likely to win just 28 of the legislature's 85 seats. Von Schulmann puts the Liberals' likely count at 22.

Something extreme would have to happen to drive people away from the NDP, and that's unlikely, he said. "I can't even think of a plausible scenario."

Recent polling results have been interpreted by some as showing a tightening race, but even the closest suggest the NDP will take at least 53 of the legislature's 85 seats.

To win, therefore, even under that rosiest scenario the Liberals need victories in at least 10 of the constituencies that they could reasonably be expected to lose.

Looked at another way, of the 49 seats the Liberals won in 2009, they can only afford to give up six.

And they've already lost four of them. Both Chilliwack-Hope and Port Moody-Coquitlam went to the NDP in byelections last year. And Boundary-Similkameen and Abbotsford South are now represented by independents, thanks to John Slater and John van Dongen leaving the party.

The Liberals could hope to win back three of those seats, though they won't have an easy time in any of them. They seem unlikely, however, to retrieve Port Moody from popular former mayor and business person Joe Trasolini.

That leaves just five others the Liberals can afford to lose. Their narrowest victories in 2009 were in Cariboo-Chilcotin, Maple Ridge-Mission, Saanich North and the Islands, Oak Bay-Gordon Head and Kamloops North. In the biggest of those wins, the Liberal candidate won by a margin of just 2.4 per cent.

With polls showing the NDP now up at least three per cent from their 2009 election result and the Liberals down at least 12 per cent, holding those seats will be difficult.

The two where they have the best shot are Oak Bay-Gordon Head and Saanich North and the Islands, where strong Green Party candidates Andrew Weaver and Adam Olsen change the electoral math, giving the Liberals a slightly better chance of winning than they otherwise would have.

Should the Liberals win those two long shots, they could afford to lose Burnaby North and Burnaby Lougheed, both of which they won in 2009 by less than four per cent.

But such a scenario would still mean they'd have to hold onto Boundary-Similkameen, Comox Valley, Vancouver-Fairview and Vancouver-Fraserview, none of which they won by more than a five per cent margin last time, as well as many, many more constituencies they look likely to lose.

To get there the Liberals would have to significantly narrow the gap with the NDP, something observers say is unlikely to happen.

"It would be historic to see them overcome the deficit they're facing at this point," said Barb Justason, the principal researcher with Justason Market Intelligence. "I don't see the BC Liberals recovering, but a few stranger things have happened."

The company released a poll last week showing the NDP with 48 per cent of support from decided voters and the Liberals at 26 per cent. The survey included 600 B.C. adults, giving it a margin of error of plus or minus four per cent, with 95 per cent confidence.

Justason said she had expected to see the race getting closer, as other polling firms have recently reported, but that's not what the poll found. "They might have numbers similar to ours at this point," she said. "I'm putting it down to timing."

Aside from the Liberals' low numbers, polling companies have consistently found Clark personally has negative momentum scores, meaning for most people their opinion of her is worsening each month. One recent poll found the words most associated with her were "out of touch," "arrogant," "secretive," and "inefficient."

Clark has also trailed NDP leader Adrian Dix on the question of who would make the best premier, as well as on who would be best to deal with most issues, including the economy.

While Clark's efforts have failed to lift her own or the Liberals' numbers, attempts to dampen NDP support have to date also been unsuccessful. The Liberals "Risky Dix" and "Searching for Dix's Hidden Plan" campaigns seem to have had little effect.

But the group Concerned Citizens for B.C., headed by former BC Rail board member Jim Shepard, is claiming success for its $1 million ad campaign that makes negative allegations about Dix's time working for NDP Premier Glen Clark during the 1990s.

The campaign is unlikely to make a big enough difference to return the Liberals to power, but should the NDP numbers drop without the Liberals gaining, the door will be open a crack for a third possibility, an unexpected result that could radically change the nature of the legislature.

Tomorrow: NDP tanks, Liberals surge... and they tie. How that long-shot scenario could place British Columbia's political power in the hands of a few independent MLAs.