[Editor's note: After taking a well-earned summer break last week, Mitchell Anderson resumes today his buzz-making series of reports from Norway comparing how that nation has managed its oil wealth to Canada's approach. More to come next Wednesday.]

Oslo, capital of Norway, is a relentlessly prosperous city, given the nation's vast petro wealth and humming economy, but the local Greenpeace office manages to conceal itself in a nondescript building in one of the city's few shabby areas.

I'd come to those offices because I was interested in the views of the world's largest environmental group on the industrial darling of the Norwegian nation. Was Greenpeace -- an organization often characterized as extremist by the Canadian government -- going to provide me the first voices I had heard stridently opposing the Norwegian oil industry? Not really. Like everything else in this country, the dialogue was decidedly more thoughtful, and typical of the much lower rhetorical temperature in Norway.

I was met by Martin Norman and Truls Gulowsen, two veteran campaigners from the Greenpeace Oslo office. When I asked if they were proud of the Norwegian oil industry, there was a somewhat awkward pause. Gulowsen offered these measured thoughts:

"In Norway the oil industry is the biggest problem for responsible action on climate change and probably will be responsible for a lot of problems in the future. But as a Norwegian, I am quite proud that we as a nation have been able to control the world's most powerful industry to the degree that we have. So when we discuss the oil industry with my international colleagues sometimes it makes me a little proud that many of my colleagues would be happy if they could get their oil industry up to Norwegian standards in terms of regulation and precautionary measures and openness."

But he adds, "To be proud of the oil industry that is wrecking the planet is also a bit far."

'The whole situation in Canada is very strange'

Another clue that things were decidedly different here was the coffee mug Martin brought me. It was from the Norwegian police force given in thanks to Gulowsen for a lecture he recently gave at national police academy -- an invitation extended every year.

Greenpeace shares their common tactics with new recruits and their expectations regarding a police response. If everyone understands their respective roles there is less chance for conflict, and non-violent protest actions will more likely stay that way.

Norman describes a very different police encounter when he traveled to Alberta last year with a contingent of European bankers who wanted to learn more about Greenpeace's position on the oil sands.

"The first time I went to Fort McMurray I checked into the hotel, went to get something to eat, and when I got back the card to open my hotel room didn't work and there was a business card from the RCMP in the door saying 'Please call us now.' "

"They were quite friendly and asked for all kinds of details on why I was there. I was travelling with a group of Scandinavian investors and didn't have anything to hide. What was weird was after I had said everything, they had a print out of an email with our program I had sent to some of the investors. I did not send it to the RCMP and neither did the investors but they got it somehow."

Coming from Norway, how did this encounter with the RCMP make him feel? "I've been to other parts of the world where the police act differently but still I was very surprised. One of my colleagues from WWF (World Wildlife Federation) was very intimidated by this situation. The whole situation in Canada is very strange."

Also telling of a different national dynamic is the widespread public opposition in Norway not to Statoil's domestic operations, although their recent drive towards arctic waters does spark opposition, but to their recent investment in the Alberta oil sands. An Oslo taxi driver was well aware of the controversy and told me "people look at it and they don't understand it because it is not good for the nature."

There have also been a growing number of Norwegian shareholders demanding that the partially privatized state oil company divest from their Alberta operations on ethical grounds, including the powerful Church of Norway. The Bishop of Stavanger has been particularly vocal on this issue.

Gulowsen relates how some Norwegians were initially puzzled by an environmental campaign focusing on Canada. "People said, 'It's a democratic country. It's like us. Why are you bothering about what a country like Canada allows Statoil to do?' "

According to Gulowsen, fewer Norwegians now presume that Canada is environmentally responsible. "It seems more and more that this notion is a bit wrong. Especially when it comes to operations in Alberta, it seems the oil industry is not under control. It's not regulated and monitored and enforced the way one would believe as a Norwegian. The more it leaks out to the rest of the world about how Canada lets the oil companies behave in the tar sands is gradually changing the world's picture about the environmental status and responsibly of Canada, and that isn't beneficial to any Canadians. "

It's not that Greenpeace is completely happy with all Norwegian oil operations -- far from it. They strongly oppose proposed exploration programs moving into to critical fish spawning areas off their north coast and towards the Arctic. They also cite the lack of progress in moving Norway towards wind and solar technologies like their Scandinavian neighbours.

Gulowsen is also highly critical of what he sees as a departure from the principled positions taken by Norwegian politicians when oil was first discovered in Norway.

"If you go back to the 1970s when the government did these super smart things, the founding fathers of Norwegian oil policy were dead afraid of Dutch Disease (oil-driven high dollars hurting other sectors of the economy). It was their bearing principle of opening up Norway as an oil country. They were so afraid that the oil sector would get too big and we would get too much money too quick, they established investment targets, production targets, and required headquarters in Norway. These fundamental drivers that the Norwegian government had in mind in the 1970s, they have forgotten now, even though we're we are still benefiting from those decisions. That fear as a leading principle persisted through the seventies and most of the eighties. After that the mentality changed. Now politicians and the government think more like an oil company -- as if everything that is good for an oil company is good for the Norwegian state."

There is little doubt that in spite of efforts to avoid Dutch Disease, the Norwegian economy is increasingly awash in petroleum money. According to Gulowsen, recent Norwegian governments have lacked the political will to cool the economy by curbing oil production. "It would be more effective to level out the hottest sector but the government is not tough enough to do that."

In spite of these tensions, does Gulowsen feel that Greenpeace is being listened to in public policy development?

"We are regularly invited into consultations about new projects or approvals or licenses. Any new offshore project is subject to a quite extensive hearing process. The discussion in Parliament is quite open and participatory. We don't always get our way of course but it's quite open."

Adds Martin, "When we go to Statoil facilities to hand out material about the tar sands to all the workers, they greet us with coffee and sandwiches.... We can take the night train with executives from the investment department of Statoil and have beers and discussions until the early morning and it's all good. Discussions are needed. It's the same with the government."

"Compared to Canada it's a completely different environment to work in. When I was in Alberta in March I was meeting with people from the government and there was a guy there who has never been in the same room with anyone from Greenpeace and he wanted to have his picture taken with me because that seemed so strange to him."

You can take these statements at face value. Try, however, to imagine the response from members of a Canadian environmental organization if they were asked if their government was listening to them. 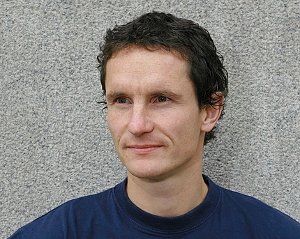 Greenpeace's Gulowsen: 'We are regularly invited into consultations about new projects or approvals or licenses.' Photo: Mitchell Anderson.

"We've been on their backs to set up a tax regime that is sufficiently high and have a licensing process keeps the government in control over the possible growth of a new industry."

As part of this process they offered the Greenland government a checklist of successful policies implemented in Norway to ensure that their public resources provide maximum benefit.

While Greenland has yet to discover any oil resources, their starting negotiating position with international companies assumes a 12 per cent national ownership of any discovered reserves.

I gamely tried to explain to Gulowsen that national or provincial governments in Canada have virtually no ownership share in our petroleum resources, but driving this point home was a struggle.

"The Greenland government has at least produced quite thick reports to their parliament that their proposed taxation system is sound and they haven't even discovered oil. In Canada there has been an industry with enormous investments of money for decades but the willingness or ability to ensure they capture revenue from industry seems smaller than the interest we see in Greenland."

Perhaps Greenpeace Norway should also be advising the Alberta government on their negotiating position with the oil industry. Alberta just announced their fourth consecutive budget deficit, which may top $3 billion.