"They ought to slap the cuffs on them," Brian Fitzpatrick says. 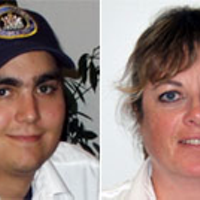 The tall, rugged former logger and heavy equipment operator is talking about the Peter Kiewit Sons & Company managers and supervisors whom he holds responsible for his son Sam's death.

Sam Fitzpatrick was crushed by a falling boulder at a worksite on Toba Inlet in 2009, in an incident that a Worksafe BC inspector said reflected "reckless and grossly negligent" decision making by company management who had ordered heavy equipment to operate upslope from where Sam and his brother Arlen were working despite an incident the previous day in which a huge rock came down the slope and barely missed workers below. Arlen saw his brother die. (The Worksafe BC report is here.)

"In just one ugly moment, Sam was killed," Brian Fitzpatrick told The Tyee. "His hopes, dreams and joy of life smashed out of him. Arlen's days as a young man, looking forward with youthful enthusiasm to the future, were ripped away from him in the same ugly moment. In that horrible instant, the color left his world. Sam and Arlen relied on each other for many things and were closer than twins on many levels spiritually and emotionally."

Brian Fitzpatrick is part of a delegation of nearly a dozen bereaved family members who have lost loved ones to workplace accidents in B.C. Also in the group will be family members of Sarabjit Kaur Sidhu and Amarjit Kaur Bal, killed in the wreck of an improperly maintained van without seat belts being used to transport farm workers in 2007 and the wife and daughter of Michael Phan, left permanently brain damaged after a 2008 tragedy at a Langley mushroom farm that killed three of his fellow workers and permanently injured another.

The delegation, organized by the BC Federation of Labour, meets today with two provincial ministers in Vancouver to press demands that employers who take risks that kill or injure their employees face real and effective legal sanctions, up to and including imprisonment.

The group is slated to meet with Justice Minister Shirley Bond and Labour Minister Margaret MacDiarmid today, Aug. 28, and both family members and labour leaders have a lot to tell the BC Liberal Ministers.

According to a draft of the brief that will be presented to the ministers obtained by The Tyee from the BC Fed:

The delegation will be urging the provincial ministers to support a series of reforms designed to prevent the kind of tragedies that killed or crippled the workers whose family members will be in attendance. The key recommendations, as noted in the BC Fed draft, will be:

1) 'Dedicate a Crown Prosecutor to deal with workplace fatality and serious injury cases.'

"The dedicated prosecutor will become an expert in reviewing these investigations against Section 217.1 of the Criminal Code and, therefore, more accurately determining the likelihood of conviction."

Section 217.1 of the Code, adopted in 2004 after more than a decade of trade union pressure following the lethal mine accident at the Westray mine in Nova Scotia in 1992, notionally makes it possible to prosecute an employer or supervisor who fails to fulfill "a legal duty to take reasonable steps to prevent bodily harm to that person, or any other person" at the employer's behest.

However, as the delegation will be pointing out to the ministers, since the law was adopted in 2004, its enforcement history has been unimpressive. Only a handful of charges have been laid, and of those cases only two have gone to trial and only one has led to a conviction. To put this into perspective, Stats Canada reports that in 2010, the most recent year for which national figures are available, 1,014 work related fatalities occurred in Canada, while 190 work related deaths occurred in B.C. in 2011. 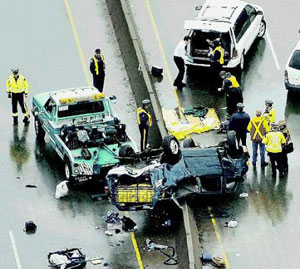 Harsharan Singh Bal, whose mother died in this farmworker van crash in 2007, demands to know why no charges were filed.

2) 'Train police services on Section 217.1 of the Criminal Code'

"This will ensure that police understand the law and know what to look for in workplace fatality and serious injury cases in order to collect the best evidence to support the Crown Counsel's decision making. (See the CLC guide "A Criminal Code Offence: Death & Injury at Work.")

3) 'Mandatory police investigations of all workplace fatalities and serious injuries.'

"Police investigations are necessary in order to determine if criminal negligence exists, as they are trained to collect and weigh criminal evidence. These investigations must be separate from the OHS regulatory investigation, but can be done collaboratively."

BC Fed president Jim Sinclair, who will be leading the delegation today, said, "These ministers can make a difference, if they want to. The law is clear. Criminal negligence should lead to strong penalties. Some businessmen should be charged and jailed in cases like these. We want employers to face clear consequences. Nobody should have a get out of jail free card."

Sinclair said that politicians who say they are tough on crime should be tough on employers who endanger their workers.

"We don't expect to fill the jails with CEOs," he said, "but in some circumstances, jail is appropriate."

'My mother was a human being'

"Kill a worker, go to jail, should be the rule," Steve Hunt of the United Steelworkers, who expects to be part of the meeting with ministers, told The Tyee. Hunt's union, which represented the 26 workers killed in the Westray disaster, played a leading role in the campaign to bring in the new criminal code language designed to prevent repetitions of the tragedy.

"Eight thousand workers have died at work since the law was passed, and there have been no successful prosecutions," Hunt said. "Employers can kill workers with impunity. We're not sure why the law isn't being used properly."

Harsharan Singh Bal, who lost his mother Amarjit in the 2007 van crash, agrees.

"My mother was a human being, not an animal," he told The Tyee. "We are going to ask the ministers why no charges were laid. Someone should go to jail for this, and the loopholes in the law should be closed."

In 2007, a clearly broken hearted Bal told The Tyee, "The last day with my mother, she cooked food for me and my little sister. Then we saw her body on TV, with her shoes knocked off and on the highway. It was really killing to see that."

Jagjit Singh Sidhu, who lost his wife Sarabjit in the same tragedy, pointed out that an RCMP investigation into the van crash recommended that 33 criminal charges be laid against the van driver and the company that owned the van. All the charges were dropped by Crown Counsel, Sidhu said.

Tracy Phan, Michael Phan's daughter, told The Tyee that she and her mother would be part of the delegation today because "we don't want this to happen to anyone again. We hope the laws will be enforced to prevent these kinds of accidents in the future."