"The Heiltsuk will never support this pipeline." Standing on the Bella Bella breakwater overlooking Lama Passage, Chief Councillor Marilyn Slett is calm but emphatic. No amount of reassurance or compensation, Slett says, will change her community's stance on the proposed Northern Gateway project.

"We're here to stay. We'll do anything that we need to, to protect our land and sea. And I can say that with the spirit of the nation."

People in this community of 1,500 say they have relied on the surrounding ocean passages since time before memory. Like many places in B.C., the coastal ecosystem provides Bella Bella with food, transportation, and jobs in fishing and tourism -- a way of life residents fear would be wiped out in an instant by a tanker spill.

Heiltsuk leaders are unimpressed with B.C. Premier Christy Clark, who until today refused to take any clear position on Northern Gateway.

"It's not surprising to me that the position that was declared isn't really a position," says Heiltsuk Tribal Councillor Jessie Housty. "It's nothing but more ambiguity and avoidance."

'No amount of risk is acceptable to us'

Without bringing up specific numbers, the province says it wants a bigger cut of pipeline revenues. Premier Clark has been increasingly vocal about B.C. being asked to assume a risk disproportionate to potential rewards.

The premier is also calling for the implementation of "world leading" response practices for oil spills both on land and at sea. Clark says support from her government would depend on new environmental measures.

"She has conditions in there around making this safer," says Housty. "That's not the same as making it safe. We've been very clear as coastal peoples that no amount of risk is acceptable to us with this project."

The province's fourth condition is that "legal requirements regarding Aboriginal and treaty rights are addressed."

Says Councillor Housty: "Christy Clark talks about First Nations rights and title and about duty to consult. She shouldn't be trotting those out as though we ought to be congratulating her for including that. That's an absolute bare minimum requirement."

Finally, the province said today it won't approve projects until they pass a federal environmental review. In the case of Northern Gateway, that process is being carried out by the Joint Review Panel, a body of the National Energy Board.

JRP hearings this week in Shearwater

Bella Bella was to host a second round of Joint Review Panel hearings on Northern Gateway this week. The session was scheduled after hearings were cancelled in April amid alleged security concerns. With support from the RCMP, the Heiltsuk strenuously deny that the Bella Bella community poses any threat to National Energy Board staff. 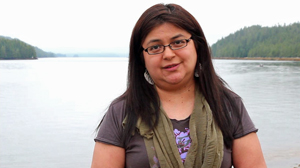 Nonetheless, the panel has decided to move this week's hearings across the water to Denny Island, at a hall in the predominantly white community of Shearwater.

In a letter sent to Chief Councillor Marilyn Slett, JRP secretary Sheri Young says "in selecting locations for hearings, the Panel considers which locations would be conducive to a respectful, accessible, efficient and effective process in which to receive evidence. In the case of the hearings for 26 and 27 July the Panel has concluded, using the above criteria, that Bella Bella is not the optimal location for collecting the remaining oral evidence and oral statements from the Heiltsuk."

People in Bella Bella interpret the move as a deliberate slight. Chief Slett calls it "really disrespectful to our community. We feel as though our voice isn't being heard in this process."

"Despite the circumstances," says Chief Slett, "we're going to be there and we'll provide our testimony. We do have to go on record."

Plans are now being put together to ferry community members over to Shearwater.