Thirty years after Simon Fraser University's Women's Centre opened its doors, the campus is now considering a proposal for its first ever Men's Centre. 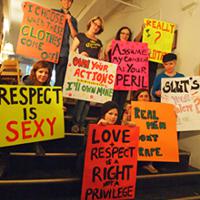 Last Wednesday the Simon Fraser Student Society (SFSS) Board of Directors approved a budget of $30,000 for the project. The project was initiated by Keenan Midgley who, as treasurer, also writes the budget. "We were in a financial position to expand our services and I think this could be really useful on campus," he said.

But the creation of a Men's Centre at SFU stirs unease among feminist scholars and other women's advocates on campus, who say it's not clear the new institution will promote equality among men and women, that the process for creating it has been fast-tracked and without collaboration, and its backers don't acknowledge the reasons why women in particular need a safe space.

An SFU women's studies undergraduate student has added new voices to the controversy by creating a video featuring some of her classmates' thoughts on the proposal (watch it towards the bottom of this article). "I didn't feel like we were being heard so I put it into a video just so that the board could hear how people were feeling about the project," explained video-maker Natasha Clearly-Dulai.

SFSS president Jeff McCann said the purpose of the Men's Centre is not specifically about gender equality, but rather to build a support structure and community for men who've come to SFU from out of town and are having a difficult time finding ways to get involved on campus.

"That also ties into men's issues and mental wellness and all the different things that come along with that," he said.

'Not apples to apples'

At the heart of the debate is how people think about "equality." Mary Shearman, a graduate student and instructor in the Department of Gender, Sexuality, and Women's Studies (GSWS) at SFU, disagrees that just because there is a Women's Centre, adding a Men's Centre would create a better and more naturally just balance.

That way of thinking ignores that women, overall, still face more discrimination and hardships than men. Establishing a Men's Centre, she said, may give the impression of creating a "formal equality" without taking needed steps towards "substantive equality."

The idea that the definition of equality should be that all people are treated the same is something that women's studies scholars have challenged through research and theoretical work over the years -- including Shearman, who said "I don't necessarily agree that 'formal equality' works."

As Clearly-Dulai said about levels of oppression faced by women compared to men, "It's not like comparing apples to apples."

McCann said the project is in its early stages. While the Board of Directors has committed to pursuing the project, there is no plan, as of yet, for what exactly the centre will look like.

But he's determined to press ahead. "The next step is to start planning programming and looking at different opportunities for space," said McCann.

A place of men's own

While women's centres exist on most college and university campuses across Canada, men's centres remain something of an anomaly.

According to the SFU Women's Centre's website, the need for women's centres is fairly obvious: "The men's centre is everywhere else."

Shearman said the Women's Centre is particularly important as it provides a safe space on campus -- women go to the centre to deal with issues like assault and harassment, as well as to just hang out and take a nap. "It's politically and historically important, as well as being valuable in terms of the services it provides."

Shearman isn't necessarily opposed to the Men's Centre but wonders what purpose it will serve. "I think if the Men's Centre is going to talk about questions of masculinity, that would be beneficial for everyone. You could then talk about what living in a rape culture is all about from the masculine standpoint. I think that could be really interesting."

McCann emphasized that the Men's Centre is intended to be a place where men can find support not available in other settings. "Once you have a support structure and there is a safe place to talk about things, then you're going to be able to start talking about some of the issues impacting men," he said.

One of the statistics included in the proposal for the centre showed that suicide rates are higher among men than women.

Cleary-Dulai said such statistics are misleading and don't necessarily equate to a need for a space specific to men.

"First of all you need to have a context behind stats. They didn't take into account the fact that the majority of people who try to commit suicide and don't succeed are women," she said. "In any case, issues around mental health impact both genders -- that seems like something that should be in health and counseling. I don't really think it's necessary to have a separate men's centre to address mental health issues."

"If they're going to have a Men's Centre it has to be for the right reasons," Cleary-Dulai added.

Shearman is more concerned about the reasons behind the project than anything else. "I'm not opposed to the idea. I just think there seems to be a bit of an adversarial approach that's worrying." If there is going to be a Men's Centre, she thinks it should happen in collaboration with the Women's Centre, not in competition.

McCann said the Men's Centre is still working on its mandate. "We're just going to start out with meetings and programming and some community building events. In the long term we can hopefully look at a physical space like we have with Out on Campus, our Women's Centre, and our First Nations Student Association."

But Cleary-Dulai doesn't see a Men's Centre as being comparable to those spaces, many of which were created over long periods of time and were not easily awarded funding at first. "It took over 10 years to create the Women's Centre and these guys don't even have a working group and they're getting funding. There's a problem with that -- that's not procedural fairness."

While centres and associations like Out on Campus, the Women's Centre, and the First Nations Student Association exist to acknowledge and address issues affecting systematically marginalized groups, a centre for men cannot be justified on a similar basis, critics point out.

Before the Men's Centre move much farther along, Shearman thinks consultation is key. "There was just no discussion," she said. Cleary-Dulai added: "Because they didn't talk to any of the social advocacy organizations at SFU or try and work with them it seemed like they were working in competition with them."

Shearman would like to see an open forum about the Men's Centre's focus. "I'm under the impression that no one's really standing in the way of the idea but just that people want to talk about this and talk about the approach," she said.

Clearly-Dulai is unconvinced that a Men's Centre is necessary. She doesn't argue that men are never victimized or marginalized, whether the cause be racism, poverty or sexual identity. But she's sees no indication, yet, that helping such men will be the primary purpose of SFU's Men's Centre.

Rather, she worries it will become a haven for men who would rather not acknowledge some of the negative effects that traditional ideas of masculinity keep reinforcing and repeating. As Cleary-Dulai puts it, she doesn't want to see a resource centre for "hegemonic masculinity."

"To me that's like saying, 'Oh well, they have an African group on campus and therefore we should have a white group'. If anybody proposed having an all-white group, there would be some big problems with that."