When the provincial government decided all new school buildings must meet the LEED Gold standard in 2008, the motive was making B.C. the province with the first carbon-neutral government in Canada, with the added benefit of saving school districts some energy costs. 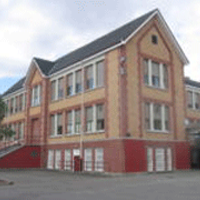 But new avenues of research into the effects of school buildings on human health and productivity are producing evidence that the government's move towards greener schools could be producing healthier, more productive and more environmentally aware students.

A tale of a green Dickens

The new Charles Dickens Elementary School was the first to achieve LEED Silver status in the Vancouver School District when it opened in May 2008; however, the government wasn't enforcing LEED Gold certification then, so the district had to use their own funds to reach their goal.*

Some of the green features include an underground rainwater cistern for non-potable water, geothermal rods that mine the earth's heat to warm and cool the building, and electronic sensors that monitor the number of people in the room to determine how much light and heat is required.

But while the custodial staff estimates significant energy savings in comparison to the old buildings -- as much as 50 per cent less gas than previously required -- there is little more than anecdotal evidence the building is producing healthier, more productive students and teachers.

"I think the air quality is definitely different, I noticed that right away from all the buildings that I've worked in," says principal Kathy O'Sullivan.

"And we do have some sickness, colds and the occasional flu, which is during certain seasons, but I don't see a high absenteeism due to illness, so I think that's a positive thing. I do see less dust and dirt."

Researchers in Canada and the U.S. want to turn anecdotes into hard facts by monitoring the affects of natural light, air quality, and acoustics on children's ability to learn, and as a result are discovering many requirements of sustainable structures are meeting the educational and health needs of children far better than traditional buildings can.

Let there be (natural) light

When Dickens was under construction, the Ministry of Education required at least 10 per cent of classroom walls to be windows. But the designers at Stantec, who designed and built the school, decided this wasn't enough to get the energy-saving benefits of natural light, and opted to go with three times as many windows for the school.

But it wasn't just to save energy -- they were also aware that natural light just looks nicer than artificial.

"This is a fantastic school for access to daylight," says Rebecca Holt, sustainability specialist for Stantec.

"I think being able to see what's going on outside and have real daylight rather than artificial light makes for a much nicer quality, too."

The pleasing aesthetics of natural light is an area Jennifer Veitch has devoted her career to studying.

"In a space that is well day-lit we have better knowledge of what's going on outside and a connection, both to the passage of time and to exterior conditions, so you know if it's cloudy or sunny, is it raining or what-not, and people like that sense of connective-ness to the outdoors," says Veitch, a senior research officer in lighting for the National Research Council's Institute for Research in Construction. 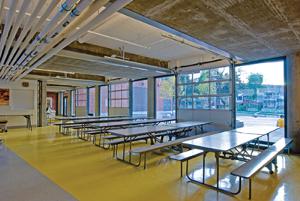 Veitch studies the effects of office lighting on people, and says many report feeling healthier when exposed to natural light, as compared to electric light. She cites a 2003 study by the Heschong Mahone Group, a California-based green-building consultant firm, which found elementary school classrooms with the most daylight saw a 21 per cent improvement in productivity compared to students in classrooms that had no daylight.

Fellow lighting researcher Mark S. Rea of the Rensselaer Polytechnic Institute conducted research in 2010 in North Carolina where Grade 8 students wore orange, short-wave light-blocking glasses to school one week, and not the next week. When students wore the glasses their sleep onset was delayed, and they weren't getting adequate sleep to prepare them for school.

"The results presented here are the first to show, outside laboratory conditions, that removal of short-wavelength light in the morning hours can delay DLMO in 8th-grade students. These field data, consistent with results from controlled laboratory studies, are directly relevant to lighting practice in schools," reads the study.

Part of attaining LEED Silver status means using materials with low volatile organic compounds (VOCs) only. Everything from the glue, to the paint, to any coatings could only have a certain amount of VOCs -- which cause everything from "new paint smell" to eye irritation and respiratory problems -- before points would be deducted.

Another credit required a two-week flushing of the ventilation system using outside air, flushing out any construction materials, emissions or dust left behind, before anyone could enter the building.

"It makes for a much, much better indoor environment. And you just don't get that smell that you do when you get fresh paint and you come into a new building, that smell you're getting is VOCs," Holt told The Tyee.

Green buildings weren't always known for their pristine air quality. Efforts to make more energy-efficient buildings in the 1970s resulted in airtight buildings, where designers attempted to prevent any air from escaping the building in order to save on heating and cooling, but didn't allow for the circulation of clean air to breathe. This was known as "sick building syndrome."

"What they did was they were trying to reduce infiltration rates, and there are changes per hour, so they sealed them very tight. But then of course nobody could breathe," says John Robinson, executive director of the UBC sustainability initiative.

"The department of the environment buildings in Hull, Quebec, were at a place called Les Terrasses de la Chaudiere, I believe, and anyway the joke was Le Terrace de Shoddy Air, because the air quality was so bad."

Airtight buildings can also create mold, where moisture produced by students has nowhere to escape and instead collects on, and sometimes in, the cold points of walls. 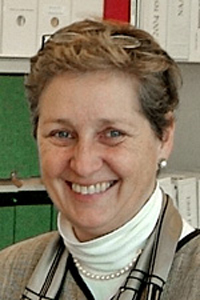 "If it's really cold outdoors, you could have a cold point on the inside, or in the middle of a wall, and you could easily take room moisture and it finds its dew point and condenses and those surfaces," says Vivian Loftness, a professor of architecture at Carnegie Mellon University.

"And the same is true in your hot, humid climates from the outside: you air condition the building, if you don't manage the thermal bridges, you could have the moisture outside the building actually condensing in the walls, which then will breed mold and create long term issues."

Dickens is not airtight: each classroom has windows that open, and the cafeteria features garage doors that roll up in order to incorporate more light and air into the space during the warmer months.

"Access to outside air is another feature that we reward through LEED. It also allows your occupants to control the environment, so if I feel stuffy I can just open a window," says Holt.

One of the issues with open-concept spaces such as the Dickens cafeteria, where natural airflow replaces the need for mechanical systems, is acoustics. While cafeterias are not necessarily quiet places, other green buildings have found their open spaces are an acoustical nightmare for teachers and students.

"Because they have open airways in order to allow natural ventilation, as well as concrete floors, a lot of green buildings, if you combine those with leather shoes, you get a real acoustic problem," Robinson told The Tyee.

"And so in general green buildings have been designed in ways to maximize environmental benefits and not enough attention, I believe, has been spent on the human dimension."

Not only are noisy classrooms disruptive for learning, but also they can create health problems for students and teachers who have to strain their voices to be heard.

"Teachers trying to overcome outdoor noise will project their voice at a higher level, and teacher health was being compromised -- they were getting hoarse," says Loftness.

"And as soon as you provide better acoustic environments teachers don't have to project their voices as hard and those health problems are greatly reduced."

Loftness suggests sustainable building designers go beyond standard LEED by combining the measurement with other green building standards, such as ASHRAE or CHPS, in order to maximize acoustics, energy savings and the use of natural light.

"Even though the standard gives you the single checkbox for daylight, and one checkbox for natural ventilation, I think we have to actually take a far more dramatic and concerted effort to increase the number of checkboxes, whether through regional credits or through just a local commitment," she says.

Much of the research on the benefits of green schools is still in its infancy, less than 10 years old, but Robinson hopes to further the field with the completion of the Centre for Interactive Research on Sustainability (CIRS) building on the UBC Vancouver campus later this year. Billed as the greenest building in North America, with its own waste treatment system onsite, a combination of solar and geothermal heat, and a water system based on rainfall collection, it will also serve as a living laboratory, where inhabitants are monitored for their happiness, health and productivity.

Robinson hopes the CIRS building, if successful, will change the way people think about buildings. But green schools are already doing that for B.C. children like the ones attending Dickens Elementary today, who are knowledgeable enough about the school's green systems to conduct their own tours.

"They're very proud when they're taking people around and they're saying the gym has recycled materials on the wall and on the gym floor, they talk about the water that we're saving, there's no paper towels in the washroom because they have hand dryers, all those kind of things," says O'Sullivan.

"They're just very used to it becoming part of their lives. So I'm sure that as they move through the school system and they look at buildings in general that they will see the importance of that."