[Editor's note: This portrait of Zabi Majidi is the second in a series, running Thursdays and Fridays, by Terry Glavin profiling Afghanistan's 'unsung heroes,' a project supported by the Canada-Afghanistan Solidarity Committee and the Funders' Network for Afghan Women.]

There are seven gates that lead inside the narrow and winding passageways of the Murad Khane, the 18th-century walled quarter of the old city of Kabul. It is hidden away within a hive of narrow streets and alleys bustling with fruit and vegetable sellers, blacksmiths, silversmiths, and jewelers holding aloft glistening strands of lapis lazuli. There are naan bakers and gem cutters, potters and leathermakers, seamstresses, tailors, almond hawkers and spice merchants. There's one long and winding alleyway taken up entirely by peddlers selling caged songbirds. 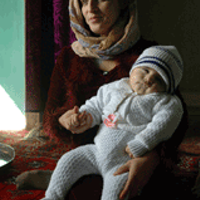 Down the Murad Khane's busy flagstone passageways you will still find old, richly filigreed window frames, door screens and facades in the Nuristani and Kabuli styles. There are still "hammams," the old domed-roof bath houses, and relics of ornate Simgili plasterwork in walls that surround cool and quiet courtyards. Some of the old houses still tilt and groan against elaborately-carved Kandankari verandah posts, and there are still faint echoes of the grand Mughal style in the great serai, the central gathering place.

Through winding corridors and up and down staircases I was led by Zabi Majidi, a 30-year-old Afghan architect, raised and schooled in Germany and Britain. Zabi is the youngest of the Afghan journalist Mohammad Shah Majidi's five children. Kabul's old city was Mohammad Shah's boyhood neighbourhood, and Zabi grew up on its stories. Not for nothing was Kabul once called the Paris of the East. When Mohammad Shaw came back shortly after the rout of the Taliban in 2001, he brought Zabi with him. He wept, because everything from his childhood was gone. "It was terrible for him," Zabi remembers.

Zabi worked for a while as a project architect in London and Shanghai, but it wasn't enough, so he went back to school to finish his thesis on urban redevelopment, and that's how he ended up back in Kabul, in 2007. When I met him, he was working for the Turquoise Mountain Foundation on an ambitious vision of restoring and rebuilding the Murad Khane. This is why he was so happy to show me around and explain to me what it was I was seeing.

There, the grand home of a long-forgotten khan. Here, the remains of several buildings demolished by bombs, their ancient timbers plundered for firewood during the Mujahedeen wars. There, at least 20 structures that collapsed during an earthquake in 2006. And here, from this rooftop, you can see the old king's palace, and the famous brick bridge across the Kabul River. From just about any of the flat roofs of the Murad Khane you can also see the ugly concrete office and apartment blocks that steadily encroached upon the neighbourhood during the Soviet era. Over here, this will be a teahouse once again, Zabi went on. And there, that will be a gallery.

The Turquoise Mountain Foundation is the brainchild of the eccentric British soldier-diplomat Rory Stewart, author of The Places In Between, a chronicle of his journey across Afghanistan on foot in 2002. The foundation's big idea is that Afghan civilization, long buried in the ruins and the rubble of savagery, must be allowed to re-emerge from its hiding places. Civilization springs from the people themselves, and from the cities. Rebuild its wellspring, and civilization will flourish and triumph across the land. When you turn to Kabul for this, and to Kabulis themselves, you will find yourself in the old city.

In the Murad Khane, you turn to the dwindling brigades of Afghanistan's traditional master craftsmen, and what was only recently a decrepit slum is now an emerging centre of art and learning and commerce. The place is now alive with seasoned artisans and young apprentices, carpenters, ceramicists, calligraphers, sculptors, plasterers and jewelers. There are literacy courses and embroidery classes and the clattering and clunking of hammers and chisels in the work of rebuilding old guest houses for visiting scholars.

All of this unfolds down Murad Khane's alleyways in the shadow of the Abul Fazl minaret, a defiant testament to all those things that for so long had been forced to hide here from the angry world outside.

The Abul Fazl, with its little sidestreet mosque, is the only place in Kabul where Shia practices have flourished as a kind of back eddy in the city's mainstream currents, which flow from Sunni Islam. At the Abul Fazl mosque, everyone prays together. Among the Murad Khane's hidden places are small courtyards were Shia imams have gone about their devotions for generations, ministering to Hazaras and Farsiwans in the same neighbourhoods that have long been home to Sikhs, Pashtuns, and Tajiks.

It all goes back to the people who built and settled the Murad Khane in the late 1700s. The Qilibash were Shia warrior-noblemen, followers of the great Nadir Shah, the Persian Napoleon whose empire once stretched from what is now Pakistan to the Caucasus Mountains. They were Persian speakers, "red heads" from Anatolia and Turkey. The Qilibash of the Murad Khane survived the ruthless emir Abdur Khan and his late 19th century pogroms. They survived in those hidden places known only to local Kabulis, and they survived even during the reign of the clerical-fascist Taliban, when just a hint of heterodoxy would invite the most macabre sorts of punishment and repression.

In these places, the old Afghan civility persisted. While many of the old families were bombed out or fled during the Mujahedeen wars and the Taliban tyranny, the descendants of the Qilibash walk the streets of Murad Khane to this day. You will find them among the boisterous young girls in their school uniforms, and among the wizened old men in the late-autumn sun in the grand serai, the ones with the look of Old Testament prophets about them.

When Zabi came here to start work with Turquoise Mountain, it was still the official intention of the municipal authority to demolish the whole place. This remained the municipal plan long after the Murad Khane project was well underway. That's not the plan anymore.

Zabi returns to his enumerations. Of the 600 residents, about a third are from the old families, the people who have been here for countless generations. There are roughly 120 children in the school. Average depth of the garbage and detritus removed to excavate the courtyards and passageways down to street level -- two metres. Number of dump truck loads it took to haul it all away -- 12,000. The restoration project's largest backer -- the Canadian International Development Agency, with $3 million over four years. Number of buildings identified for special protection or restoration -- 65. Carpenters and other tradesmen are now busy working on 22 of them.