[Editor's note: This portrait of Makay Siawash begins a series, running Thursdays and Fridays, by Terry Glavin profiling Afghanistan's 'unsung heroes,' a project supported by the Canada-Afghanistan Solidarity Committee and the Funders Network for Afghan Women.]

"The worst is when we have someone who has lost his legs and his eyes. We have a young man right now who has this." 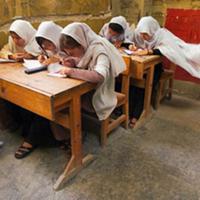 Makay Siawash stops talking for a moment. Then she carries on with all the reasons why up to 8,000 Afghans a year turn for help to the Kabul Orthopaedic Organization. This is the agency she runs from a Soviet-era building within the Afghan National Army hospital compound in the Wazir Akbar Khan district of Kabul.

"A lot are from mines, rockets, bombs. But there are also traffic accidents, children who have been blinded, or they are deformed from malnutrition or from some trauma, or malformation during pregnancy. And women, sometimes it is from hard physical activity, or they have been hit by their husbands. We have a lot of children and women. But a lot are from mines."

The young, blind and legless man whose sad story caused Siawash to catch her breath had stepped on one of the Taliban's "improvised explosive devices" -- of precisely the kind that so routinely kill so many American, Canadian and British soldiers.

Last year, the organization signed a contract with the Afghan defence ministry. Before 12 months was up, Siawash had added more than 1,700 Afghan police officers and soldiers to her client list. "They have lost arms, legs, hands, eyes..." Usually, though, the organization's clients are civilians.

As often as not, the exploding landmines are left over from the days of the Soviet occupation. Eight out of every ten amputees registered with the Kabul Orthopaedic Organization are the victims of landmine blasts. There are at least 60,000 surviving landmine victims in Afghanistan, and every month, another 60 Afghans are killed or wounded by landmines. This is a drop from roughly 100 landmine casualties a month from only a few years ago.

The United Nations Mine Action Centre reckons it has cleared 300,000 landmines and similar explosive devices from about 1,000 square kilometres of Afghanistan in recent years. But there's still at least 500 square kilometres of terrain that's contaminated. Cambodia and Angola are worse off than Afghanistan, but unlike most landmine-contaminated countries, Afghanistan's landmines are almost exclusively littered in agricultural lands, grazing areas, irrigation systems, residential areas and roads.

A particularly alarming new trend is the Taliban practice of staking out landmine-contaminated areas in order to recover old explosives for use in the manufacture of improvised explosive devices (IEDs). The Taliban uses IEDs to target government convoys, aid agency vehicles, and military forces associated with the International Security Assistance Force.

The new practice is increasingly pitting Taliban foot soldiers directly against UN "de-mining" workers. In 2008, 11 "de-miners" working for the UN and its affiliated agencies were killed in "non-mine-security" incidents and 19 were wounded, an increase over 2007's toll of nine deaths and ten injuries, says the UN Mine Action Coordination Center. The Taliban and other illegal armed groups have also begun to kidnap de-mining workers, hijack vehicles and steal mine-detecting equipment.

This represents a major setback, even from the Taliban era -- back then, UN landmine-clearance projects were welcomed by the Taliban. "This is a change," said Siawash. "The Taliban needed us in those days."

A mother of three children, Siawash can count nearly 100 relatives in Canada – a country she has never visited owing to arbitrary immigration rules that place extreme restrictions on visas available to Afghans.

It was immediately after the Taliban came to power that Siawash was hired on as administrator of the Kabul Orthopaedic Organization, which began as a charity established by the British journalist-turned-philanthropist Sandy Gall. Trained as a teacher, Siawash came to the post after she lost her job as the principal of Amani High School in Kabul. The Taliban ordered all schools closed.

"But I was one of the lucky ones," Siwash said. "The women were not allowed to work at all, except in hospitals. So I got this job."