Eighteen Pacific Rim leaders posed in their shiny, leather Roots jackets given as a gift from prime minister Jean Chretien at the University of British Columbia Museum of Anthropology on Nov. 25, 1997. 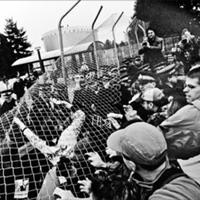 It was the obligatory "class of 1997" photo at the end of the biggest, most-expensive private meeting in Canadian history.

But as it turned out, the sight of RCMP officers pepper-spraying anti-globalization and pro-human rights protesters instead became the everlasting image of the Asia Pacific Economic Cooperation leaders' summit.

And one of the faces in that advancing line of Mounties belonged to Cpl. Gary Russell "Bud" Mercer, now the top police officer in charge of maintaining order and security at the 2010 Olympic Games in Vancouver and Whistler.

The ill-fated summit was organized by Robert Vanderloo and his deputy Mary McNeil (now B.C.'s minister of state for the Olympics) and drew 75 internationally protected people. A dozen -- like U.S. president Bill Clinton -- required the highest-level of security available. Some 23,000 people were accredited, including 8,600 delegates and media, 1,000 volunteers and 3,000 police.

The security operation, coordinated by RCMP Supt. Wayne May, had to ensure the foreign dignitaries' safety and security from their Vancouver International Airport touchdown to takeoff and everywhere in between. A team of 90 motorcycle cops led motorcades and closed streets so the dignitaries could glide safely between nine hotels, Vancouver Convention Centre, B.C. Place Stadium and, of course, UBC.

"They imposed a tight and intimidating security zone in the middle of campus, featuring miles of fencing, helicopters buzzing classrooms and rooftop snipers," remembers anti-globalization activist and UBC law student Alissa Westergard-Thorpe. "I don't think they expected that nothing gets out a very apathetic student population like having to deal with a line of police in order to get your coffee. So that was actually something that worked in organizers' favour, which is something I imagine might happen around the Olympics as well."

Nonetheless, tensions between activists and RCMP had been building steadily over the last year. In late 1996, news of the impending summit led radical student leader Jaggi Singh to form APEC Alert. It preached an anti-globalization message to anyone who'd listen, postering "Fuck APEC" signs all over campus and even crashing a mini diplomatic conference.

An altercation between Singh and a campus security guard set the grounds for a pre-emptive arrest before the summit. "An anti-APEC group, APEC ALERT, have several planned demonstrations which may involve civil disobedience from now until the conclusion of APEC on 97/11/25," RCMP Staff Sergeant Lloyd Plante wrote to four Lower Mainland detachments on November 13, 1997. "It is our intention if we can obtain a 'no-go UBC' with respect to SINGH, we may basically 'break the back' of this group."

On November 24, the day before APEC dignitaries arrived, four RCMP officers surrounded Singh on campus. They wrestled him to the ground in plain view of students. They locked him in handcuffs and led him to an unmarked car.

Friction between cops and students started in low-tech fashion on November 25. Police removed a Tibetan flag from the Graduate Student Society Building and arrested law student Craig Jones for refusing to remove paper signs from a security fence outside the Green College residence. Jones was locked in the same Richmond RCMP jail cell as Singh, whose arrest on specious grounds a day earlier prompted Jones to act.

"I hadn't expected my three little signs, that said 'democracy, human rights and free speech' would actually get me arrested. I thought I'd hang them up and get on with my day," said Jones, who resisted police orders to go to a less-visible, designated protest area.

More than 2,500 protesters gathered at noon. Organizers planned to walk to the barricades near the museum and give themselves up peacefully in front of the media. Police watched as protestors approached the rickety security fences near Rose Garden Plaza. Several people climbed the structure. It swayed, then buckled. What followed were a series of violent clashes with police -- dozens of students and activists groaning in agony as pepper spray cleared from their eyes. And the arrest of 48 protesters, who were later released.

Mercer 'saved my bacon that day'

On November 25, veteran RCMP Staff Sgt. Hugh Stewart commanded 170 officers assigned to quick response teams. Among them was then Cpl. Gary Russell "Bud" Mercer who, like Stewart, was armed with a pepper spray canister. He told his side of the story to the Ted Hughes' inquiry into RCMP misconduct on Feb. 9, 2000 as witness number 117. He was questioned about two incidents: the arrest of student activist Jonathan Oppenheim and the aggressive pepper-spraying led by Stewart, his superior.

Oppenheim was suspected of knocking down a temporary fence to incite activists. He was arrested while addressing a crowd of about 300. One witness testified that Oppenheim was trying to calm the crowd. Mercer, then a Sergeant, assisted Const. Richard Rollings, and took hold of Oppenheim for "a matter of seconds," according to the Hughes report.

Mercer testified he barked a warning when the crowd surged forward and repelled the crowd with a one-second blast of pepper spray. "Const. Rollings said he believed that Sgt. Mercer's actions 'saved my bacon that day,'" Hughes wrote.

Hughes didn't buy Oppenheim's excessive force complaint and found the conduct of Mercer and his comrades appropriate. His words were decidedly stronger about Mercer's and Stewart's actions later that day.

"I wasn't selected to be standing beside S. Sgt. Stewart, that's just the way it worked out," Mercer said recently.

Like Stewart, Mercer was equipped with a Mark 46 pepper spray canister. Stewart, who headed the quick response teams, was ordered to clear Northwest Marine Drive for motorcades to pass and testified that he waited nine-seconds between speaking and spraying. Five protesters remained on the road and he wanted them gone, according to testimony.

"Sgt. Mercer accepted that the time between the conclusion of S. Sgt. Stewart' s directive to the protesters and S. Sgt. Stewart's use of pepper spray could have been about one second." Hughes wondered whether one second could possibly be enough time for the crowd to obey.

"I disagree with you," Mercer testified. "While he was giving the order that he was giving, we were watching people link arms and hold things up over their face. I don't think that any time after that was required. They had already made up their mind." Mercer sprayed over the heads of the seated crowd, hoping to "make the intersection an uncomfortable place to be." Mercer claimed he was 10 feet from the nearest protester when he sprayed. Hughes believed it was likely Stewart was "even closer, given the results."

'Pepper spray was not required'

Mercer admitted "conversation and open hand" are supposed to be used before pepper spray. He defined open hand as "physically lifting, pushing, leading." Stewart's use of pepper spray "was not a justifiable or appropriate use of force," concluded Hughes. He would've been better off -- not to mention the protesters -- if he'd employed the open hand technique that Mercer spoke of.

"I have no difficulty with the three officers taking the three large canisters to the line with them," Hughes said. "At least one minute could have been given in addition to the one or two seconds that passed after S. Sgt. Stewart completed his warning to the crowd." Ultimately, the former Saskatchewan judge said, "Pepper spray was not required to move the protesters. It should not have been used."

Ted Hughes' Commission for Public Complaints Against the RCMP inquiry evaluated 52 complaints of police wrongdoing and, in many cases, found the conduct "inconsistent with the Charter and not appropriate for the circumstances." Crown counsel didn't recommend charges for any of the RCMP members.

Hughes' 2001 report recommended proper training of police assigned to public events, protesters be given a "generous opportunity" to see and be seen and that police "brook no intrusion or interference" from government officials.

Last July, he stood at the city council podium, addressing councillors and spectators, wearing a finely tailored suit instead of his RCMP uniform. If you saw him on the street, you'd never guess he was the top cop of the 2010 Winter Olympics.

He showed the room images he found on the Internet, like cartoon drawings of masked people with torches, burning tires and slogans like Riot 2010. He spiced the July 7 presentation with references to the killing of 11 Israeli athletes taken hostage at the Munich 1972 Olympic Village and the Atlanta 1996 Centennial Olympic Park pipe-bombing where two died and 111 were injured.

He also mentioned the 1997 APEC summit. He suggested Vancouver could experience a repeat during the 2010 Winter Olympics. He didn't mention that he was on the front lines twelve years ago.

Lessons for the Olympics

The legacy of APEC is alive within V2010 ISU planning, Mercer claimed in a recent interview. The Hughes Commission report's key recommendation was for safe areas where protesters can be seen and heard by those to which they dissent. Mercer volunteered that he supports the idea of locating such a zone during the Games outside the Vancouver Art Gallery, where Vancouverites traditionally gather to exercise free speech.

"It's been an area that has been frequently used by those that have a differing voice or differing opinion," he said. "It's important that be kept for what it is today and not be used for other things. For me that's a safe assembly area."

Ultimately, Mercer says events like APEC build camaraderie and character among those on the front lines.

"I draw on those experiences in my capacity as a leader. I've been there, done that, got the T-shirt, got the scarves, got the hats. I know what the staff are going through, I can predict sometimes how they're going to feel. It's those experiences that prepare people for leadership positions."

Tomorrow: During BC's 'War in the Woods,' Mercer led an RCMP raid on a tree sitters' encampment.