Hubert Lacroix, the president of the CBC, recently placed the future of Canada's national public broadcaster on the electoral map with comments aimed at sparking a renewed debate on future funding models. Lacroix disputed claims that low ratings are to blame for the CBC's financial struggles, instead pointing to the need to consider alternative fee schemes, including new levies on internet providers or supplementary charges on television purchases. 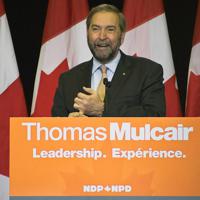 Would Funding Boost Save the CBC?

While disagreement over CBC funding is as old as the broadcaster itself, the more uncomfortable discussion for the CBC is its coverage of the current election campaign -- particularly its approach to national debates and political party advertising -- which raise troubling questions about its relevance in the current media environment.

Most would agree that the CBC features an excellent group of reporters and boasts insightful analysts for its panel discussions. However, rather than working to make itself an invaluable resource for the election, the CBC has been unnecessarily restrictive in its broadcasting choices and in the use of its content.

The most puzzling decision has been its refusal to broadcast debates hosted by other organizations. The CBC may be disappointed with the debate approach adopted by the political parties in this campaign, but that does not change the sense that if the national public broadcaster does not air programs in the national public interest, it calls into question the very need for a public broadcaster. Indeed, the CBC seems to have cut its nose to spite its face by doing its best to prove its critics right.

The CBC's odd coverage choices are not limited to the missing debates. Its use of video clips from the debates have also been unnecessarily restrictive. For example, before analyzing the recent Munk Debates on the "At Issue" panel, host Peter Mansbridge warned viewers that "we are limited with the excerpts with the amount we are allowed to show." A similar warning preceded the discussion at other debates.

Yet the reality is that there was no need to be restrictive in the use of video clips. Canadian copyright law permits the use of copyrighted works without permission as part of the fair dealing clause. News reporting is one of the enumerated purposes and even expanded clips would easily qualify under a fair dealing analysis. All news organizations are free to use as much of the video from debates as necessary to highlight key moments and positions of each leader. To suggest that the law creates significant limits on the ability to show debate clips is inaccurate.

In fact, the CBC's misreading of the law is not limited to the use of clips within its news broadcasts. Just prior to the election call, it asked YouTube and Facebook to remove a Conservative campaign advertisement that used clips from a CBC interview with Liberal leader Justin Trudeau. To support its takedown claim, the CBC argued that "no one -- no individual candidate or political party, and no government, corporation or NGO -- may re-use our creative and copyrighted property without our permission. This includes our brands, our talent and our content."

That too is wrong. The law features important limitations on the rights of all copyright holders and all media organizations regularly rely on them in their reporting. The limits of copyright extend to campaign commercials and there is little that the CBC (or anyone else) can do about it.

With its rejection of the national debates, its limited use of debate clips, and its attempts to limit re-use of its broadcast content, Canada's national public broadcaster has marginalized itself during the election campaign at the very time that it could be demonstrating its relevance to the national political coverage.