When cholera hit Haiti late in October, it was just a "mystery outbreak." I pick up such reports once or twice a month on my blog H5N1, which covers infectious diseases and the politics of public health. Usually no follow-up story explains the mystery. 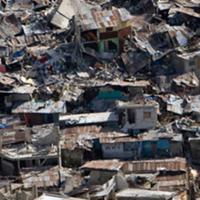 But within a couple of days this outbreak was confirmed as cholera. Again, this was not unusual. Cholera stories pop up all the time, especially in West Africa and South Asia. Apart from a handful of odd bloggers like me, no one pays attention. Cholera belongs in the 19th century, so it's embarrassing to see it thrive in the 21st.

Cholera in Haiti did get attention. In tracking it over the last couple of weeks, I've also learned more about Haiti's friends than about Haiti itself.

After the Jan. 12 earthquake that killed an estimated 300,000, I knew that infectious diseases would surely spread in the tent cities of Port-au-Prince. But I could find few links to websites in Haiti.

Least of all to the government. Google "government of Haiti" and your first hit is the Haitian embassy in Washington. Exploring it won't take long, or get you anywhere. The next couple of dozen hits are to governments or NGOs that deal with Haiti. Google "Haiti government" plus "ministry of public health and population," and your first two hits are a) a PDF from 2004 and b) one of my own posts from Oct. 28.

How about Haitian media online?: A few online papers are functioning, like Le Nouvelliste and The Haitian Times, but they tend to update slowly.

The best of them is Haiti Libre, which does post frequently and has covered the cholera outbreak in detail.

To get a sense of what's really going on, you need to go to the websites of the Pan American Health Organization (a branch of WHO), a handful of NGOs, and one or two freelancers operating in Haiti.

'Going where the silence is'

The most notable journalist is Ansel Herz, also known as Mediahacker. He's a 22-year-old freelancer from Texas who's been in Haiti since late 2009, "going where the silence is." Herz's coverage is so good I wish he'd write more; as it is, I have to content myself with the tweets he posts between reports.

Another important observer is Dr. James M. Wilson, CEO of Praecipio International and blogger at Haiti: Operational Biosurveillance. Wilson clearly knows medicine and knows Haiti. If he's worried about the spread of cholera into the tent camps of Port-au-Prince and Cité Soleil, we should worry too.

Dr. John Carroll works in a Cité Soleil clinic and blogs about his experience at Dying in Haiti. He writes clearly and powerfully, and his photographs are both beautiful and heartbreaking.

Grateful though I am for the news that such outsiders provide, I keep wishing I could hear from more Haitians. The NGOs supply fascinating stories about their efforts to bring clean water to remote villages, plus frequent appeals for donations. (The missionary NGOs also want prayers.) Agencies like PAHO itemize their efforts to fight cholera, presenting themselves as compassionate and competent bureaucrats.

Where are the Haitians?

An echoing silence fills the void where Haiti ought to be. Apart from Haiti Libre and a few other media, the whole country is like a patient in intensive care. We can anxiously peer through the window, and the ICU staff will sometimes come out to tell us how the patient is doing. We just can't hear directly from the patient.

Bad as it is, online coverage of Haiti's cholera is superb compared to cholera elsewhere in the world. The disease is endemic in Nepal (and Haitians suspect a newly arrived unit of Nepali peacekeepers brought the disease to them after half a century without a recorded case).

Cholera has killed almost a hundred Pakistanis in the aftermath of the summer floods, and sickened thousands more. Close to 1,500 Nigerians have died of it recently, and hundreds more in other West African nations like Benin.

But those countries have no resonance with North America, and precious little even with their former colonial masters. So their epidemics spread with little notice in the mainstream media or online.

Haiti, however, is our problem child, our personal guilt-trip. With every disaster we promise more help, though we're often slow to deliver it. Of course the U.S., Canada and other countries are promising still more dollars to fight cholera. For us, the Haitians are the problem and we're the solution, the heroes riding to the rescue.

But you would think that at least one of these donor countries could find the spare change it would cost to create a respectable government website, and to train Haitians in how to run it. Then they could at least speak for themselves, as the heroes of their own story.