[Editor's note: Earlier this fall, Tyee Solutions Society put out a call for submissions asking residents to share stories of the renter life. The results exceeded expectations -- when people wrote about their home, they opened their hearts. The result is this occasional series of stories about life, from British Columbians who are living it as renters.]

We never lived together. My last boyfriend, Colin, and I did nearly everything else together, but during the five years we shared our lives we didn't share a home. We never talked about it -- not even hypothetically. 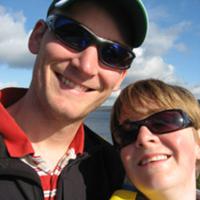 Married, in Love, and Living Apart

That should have been a sign. Instead, at the end of every day or week or weekend, we went our separate ways. I went to my little apartment, with my little roommate, in Kitsilano. And he went home to his enormous shared house east of Nanaimo Street.

Really, we were incompatible when it came to housing. Colin wanted space -- a big room, lots of storage, a garage -- whereas I wanted the beach. We were ocean and land: fundamentally different so that no matter where we were, if we were together, one of us would have felt the lack.

In the end we both felt it, and it was more than we could patch up with love and goodwill. I said goodbye to Colin, but what I didn't realize then was that I was also saying goodbye to his house.

It wasn't my house, but I got to be a part of it because I was with Colin. His casa was my casa, and his roommates were my roommates.

We renters tread lightly in our space because it isn't really ours. We hold onto it loosely, knowing that some day, either tomorrow or 10 years from now, we will have to leave. And we hope it will be because we've chosen to leave, but sometimes it isn't. There are forces and landlords beyond our control.

Four years to say 'I love you'

It took three and a half years for Colin to give me a key, and another six months for us to say "I love you".

Even then, it was a concession, a nod to our long and loving history more than a suggestion of any sort of future.

We were scared of settling in because we knew we'd be leaving eventually. In the process of untangling our lives from one another, we were bound to break some strands, to leave some pieces of ourselves behind.

The evening Colin and I broke up, we were careful. All my little odds and ends -- my toothbrush, my hairbrush -- went into a Ziploc bag, and I left carrying it like a party favour.

I didn't want to leave myself behind when I went. But my ski equipment is still in the storage space under the stairs and the bed frame I wanted to paint this summer, but didn't, is still in the backyard.

You see, I don't have anywhere to keep those things at home. My storage space is tiny and full of items that former roommates have left behind -- ski boots, venetian blinds, a hair dryer -- cast-off fragments of their old lives.

There is nowhere to paint. There is no clean break.

Security with a capital 'S'

Something needs to be said about permanence. We are taught that ownership is the ultimate goal. Make the down payment, commit to a mortgage for the rest of your life, and receive in return Security. Capital "S."

Not everyone adheres to this philosophy. Some people rent by choice -- because they don't want to settle down, because the market is bad, because the mortgage would eat up more of their gross income than they can afford.

Colin and I couldn't afford the payments, so to speak. So we chose to rent, and it worked for us for a long time. But then it stopped working.

That it did so in the middle of my bed frame renovation was inconvenient, but when has moving ever been convenient?

I drove away from Colin's house the night that we broke up, and he stood in the street watching me go. I thought I would be back sometime soon because we were all still friends. But I haven't.

Along with other shifts that didn't seem likely at the time, the house that felt like my home doesn't anymore. I don't belong there.

This is how lovers become strangers to each other. It's how we move forward and embrace the new living situation, however temporary it may be.