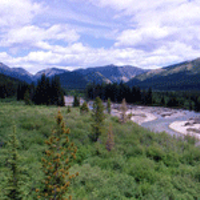 Parks Canada, which handles all of the nation's national parks, is an international leader in working with aboriginal peoples, but that wasn't always the case. Go back far enough in Canada's history, and you'll find that Native peoples were excluded from some national parks.

When Canada's first national park, Banff (now part of a UNESCO World Heritage Site in southwest Alberta), was established in 1885, the Stoney Indians, who had traveled and hunted in the area for centuries, were kept out. The policy of excluding aboriginal peoples and prohibiting traditional hunting and gathering continued as seven more national parks were established in the early 20th century.

This policy of exclusion was gradually eliminated over the past 50 years.

"In the past few decades, we have strived to build meaningful relationships with First Nations, Inuit and Métis peoples to ensure a more holistic stewardship of the land that includes the cultural values and knowledge of its people," says Alan Latourelle, the chief executive officer of Parks Canada.

Parks Canada, founded in 1911, was the world's first national parks service. The government wanted a dedicated organization to protect the habitat, pursue education and tourism opportunities and establish additional parks.

Since then Parks Canada has grown into a formidable organization, with 5,000 employees (40 per cent of them seasonal) and an annual budget of about $800 million. It oversees 42 national parks, 167 national historic sites (including the Rideau Canal and the Fortress of Louisbourg) and four national marine conservation areas. Parks Canada's goal is to create at least one national park in each of the nation's 39 distinct natural regions. Right now, they have all but 10 of the regions covered.

Many national parks have initiated projects that enhance traditional Native values. The Fort Folly First Nation, for example, worked with staff of the Bay of Fundy National Park (in New Brunswick, with the world's highest tides) to build an interpretive trail highlighting and describing traditional medicinal plants. At Terra Nova National Park in Newfoundland, the expertise of Miawpukek First Nation was essential in locating and mapping out the patches of rare boreal felt lichen.

When the federal Department of Fisheries and Oceans closed the fishery in and around Kouchibouguac National Park in New Brunswick, the Elsipogtog First Nation disputed how the fish stocks had been calculated and launched a reassessment that caused the government to rethink its decision. The First Nation also worked with the park to study salmon populations in the Richibucto River and to develop a restoration scheme combining aboriginal knowledge and scientific protocols. The Kouchibouguac park staff also works to help preserve Native languages and foster education programs involving Native culture.

Wood Buffalo National Park was established in the southern Northwest Territories in 1922 to protect wood bison from extinction. In an important shift in policy, it was acknowledged during the creation of this park that prohibiting the traditional activities of aboriginal peoples there would be detrimental to the habitat. Consequently, Native hunting and trapping and other activities were allowed to continue. This marked the first time Parks Canada had involved aboriginal peoples' interests in a decision regarding park management.

Recently, Parks Canada cooperated on a project to recognize Native culture there. Members of the Athabasca Chipewyan First Nation were concerned about the deterioration of an ancestral cemetery, and wished to locate all historic settlements and associated cemeteries in the area, especially while there was still living memory among community members. The project was successful, increasing knowledge of the park's history and helping enrich visitors' experiences.

The proposed creation of Thiadene Nene National Park Reserve at the eastern end of Great Slave Lake in the Northwest Territories illustrates how much Parks Canada's approach to Native involvement has changed. In the 1970s, when Parks Canada announced that it wanted to establish a park there, the Lutsel K'e Dene First Nation refused to allow the park to proceed. (Thaidene Nene means "land of our ancestors" in Chipewyan.) But in 2010 the park reserve plan went ahead and the First Nation had a key role in the project. The vast reserve (more than 11,500 square miles) has great natural, cultural and historical importance, and is beautiful, with dramatic cliffs and rugged islands, the deepest freshwater lake in North America (Great Slave Lake), canyons and waterfalls.

At Jasper National Park in the Rocky Mountains of western Alberta, aboriginal peoples had been absent from the landscape since the park's creation in 1907. It has taken more than a century to redress that history of dispossession. The reconciliation process has involved formal ceremonies, sweat lodges, songs, offerings and prayers of forgiveness. Parks Canada also created the Jasper Aboriginal Forum, during which Natives offer input into park management to help with the reintegration process. 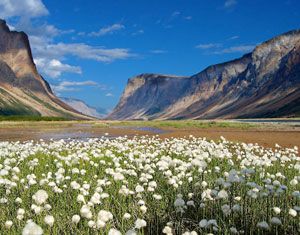 From Inuktitut word Torngain, meaning "place of spirits," the Torngat Mountains have been home to Inuit and their predecessors for thousands of years. Photo via Parks Canada.

The creation of this park exemplifies the modern approach of including Native voices. It took five decades, and the park aspect was an integral part of the Labrador Inuit Land Claims Agreement. The Inuits' special historical and cultural relationship with the land is recognized in the land claim agreement, and Parks Canada has worked hard to incorporate the Inuit in every aspect of park management. All staff members (16 in summer) at the base camp–research station are Inuit. Inuit guides lead the hikes, tell traditional stories and act as polar bear guardians so that visitors see the park through Inuit eyes. "The park," says Toby Andersen, a chief negotiator in the land claim, "is the Inuit gift to the people of Canada."

What is reserve status?

The commitment to honoring and nurturing aboriginal relationships has required changes in Parks Canada's organization, including the creation of two new groups: the Aboriginal Affairs Secretariat in 1999 and the Aboriginal Consultative Committee in 2000. The former works to build relationships with aboriginal partners, promote economic development and tourism opportunities, support the commemoration and presentation of aboriginal themes and encourage aboriginal employment. The latter provides guidance to Parks Canada and the federal government in general on a wide range of environmental and park-related issues. A 1974 amendment to the Canada National Parks Act allowed national parks to be established under a "reserve" status. This means that sections of land can be set aside and managed as national parks until land claims pertaining to that land are resolved. This has been an effective tool in allowing the creation of parks to continue, even while the ownership of the land is being contested. Before, if land was under legal challenge, it couldn't be made into a national park until the conflict was resolved.

One shining example of the juxtaposition of aboriginal stewardship with a national park is in the archipelago of Haida Gwaii (formerly the Queen Charlotte Islands) off the wild coast of northern British Columbia -- enshrouded in mist, it is a place of legends, spirits and supernatural creatures. These isolated isles have unique flora and fauna and are often called the Galapagos of the North. Gwaii Naanas National Park Reserve lies at the southern end of the islands and also incorporates a marine reserve. It is the only place in the world where a protected area reaches from seabed to mountaintop, encompassing nearly 2,000 square miles of land and ocean. In 2005 National Geographic Traveler magazine voted it the best national park in North America.

Gwaii Haanas is jointly managed by the Haida First Nation and Parks Canada, and the park superintendent is Haida. The Haida history on these islands can be traced back 10,000 years. The first contact with the white man came in 1774; by 1911, smallpox and other foreign-borne diseases had reduced a population of about 14,000 to 600. Dozens of villages became ghost towns. Today, five of these abandoned villages are protected under the Haida Gwaii Watchmen Program, under which Haida live at the sites, acting as guardians, protecting the park from trespassers or vandals. Fallen and leaning poles, now weathered to a dull grey, show only traces of the once-elaborate carvings. These are spiritual places with a sad legacy.

Canada's northern parks in particular place a major focus on Inuit culture and life. Quttinirpaaq National Park on Ellesmere Island is the farthest north, within 700 kilometres of the North Pole and is a dramatic landscape with short summers and long winters of endless darkness, punctuated by shimmering green and red sheets of northern lights. It is a remote, beautiful and hostile land of glaciers and ice caps, but still has life, including muskoxen and polar bears. It was developed with the Inuit of Nunavut, who manage the park cooperatively with Parks Canada. The identification and preservation of Inuit archaeological sites and historical artifacts in the park is a key goal. Its remote northern location limits visitors, but sightseers do come from nearby research stations and military bases.

Canada's parks aren't just national treasures, but also global treasures that have it all: majestic scenery, amazing biodiversity, a long, rich history and, finally, a strong, cooperative relationship with aboriginal people. "Canada's national parks are the envy of every parks system [worldwide]," World Wildlife Federation Canada CEO Gerald Butts says. Their renown has only increased since the aboriginal understanding and culture of these landscapes has been included.

Aboriginal culture is rich, diverse and inextricably linked to the land. Canada's national parks connect Indigenous Peoples and their culture with non-Native travelers from all over the world. Here are five parks that showcase that connection.

Named the best national park in the world by Condé Nast Traveler, it is all about the history of the Haida First Nation. The new cultural center has displays on canoe making and carving, and performances. A national marine conservation area immediately adjacent to the national park was created in 2010. The Haida Heritage Site has five ghostly, abandoned villages, with fallen and decaying totems.

A land of stark, towering mountains, immense ice fields and lush valleys that yield a diverse array of plant and wildlife. Here is Mount Logan, at 19,545 feet Canada's highest peak. The park lies within the traditional territories of the Champagne and Aishihik First Nations and Kluane First Nation. Over thousands of years, dän (the people) have developed effective methods for living in this land of extremes.

Abutting Lake Superior, the park covers 725 square miles of boreal forest. The Anishinaabe have known the land and water for some 30 centuries. First Nations interpretive programs are offered.

Thaidene Nene means "land of our ancestors" in Chipewyan, one of the languages of the people of the north, which is only fitting, since this reserve, at the eastern end of Great Slave Lake, encompasses an area of great cultural and historical importance. In addition to many sacred sites, the 11,500-square-mile park also includes dramatic cliffs and islands and the deepest freshwater lake in North America.