The Harper government is cutting back. Environmental regulation, social programs, government oversight -- all on the chopping block. Cutbacks could have ramifications for every sphere of Canadian life, from the most basic elements of national identity to the map itself. The following list offers speculation on our Harperized future: 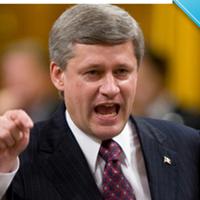 "True north, strong and free" may no longer be financially sustainable. To be replaced by: "Alleged North, strong! Free-ish."

The anthem phrase "with glowing hearts" can stay -- but may now imply future cutbacks at the Canadian Nuclear Safety Commission.

Would-be anthem singers could also get phone calls: "True North has been temporarily moved 40 degrees to the north-east. This is an automated message from Elections Canada."

Funding from the private sector will be key to making up budget shortfalls. This may lead to new approaches, such as the creation of the Rocky Mountain National Car Park.

A slight tweak to a beloved national symbol and voila: the Canada Trust Goose.

Thanks to the long-overdue relaxation of oppressive environmental oversight, the list of approved alternative fuels will be amended to include bear fat.

The good people at NASCAR will be invited to inaugurate stock tanker races in the waters along the West Coast. Some tight passing lanes through the Straits of Georgia should ensure plenty of high-octane action.

There are Canadian towns that may feel the need to downsize both services and public expectations. Names can be key to making those psychological adjustments. Thus, some changes on the national map:

NFB to be replaced by the National YouTube Board. New Telefilm funding model to be based on teaching cats to play musical instruments.

Henceforth, the champions of the NHL will be awarded the Stanley Chia Pet.