Many Canadians have mixed feelings as they watch the Conservative Party of Canada stagger from one fiasco to another. Some of us even remember the old fiascos: the proroguings, the stonewalling over the Afghan detainees (with personal abuse heaped on Richard Colvin for alerting us to the problem), and subsidies for Tony Clement's renovation of his riding. 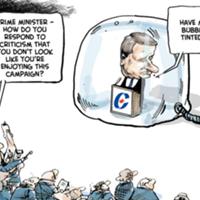 Since they won a majority, of course, the fiascos have grown worse: "with us or with the child pornographers," robocalls, and now the F-35 mess. Our mixed feelings stem from watching the Conservatives fail, while also watching Canadian institutions weaken. Contempt of Parliament has become a condition, not an event. Ministerial responsibility has gone the way of the beaver hat. Environmental assessments are being shortened, the sooner to get pipelines in the ground feeding tankers on the coast.

The public has learned to believe that "All politicians are like that." In a country with democratically-elected representatives, that amounts to saying, "We're all like that."

The worst outcome of the past six years of Harper government may still lie ahead. Other parties may not like Harper, but they respect how far he's come, and how far he's dragged the country to the right. No doubt some party strategists are thinking that they can play by Harper's toxic rules too, if that's what it takes to win power.

Some strategists, but not all. When Vikileaks was revealed to be the creation of a Liberal staffer, Bob Rae made a full apology to the House. He was also making a point of doing politics the old-fashioned honourable way. But the NDP made a point of electing Thomas Mulcair as their leader, in part because they'd decided only the toughest bastard they had could grapple with Harper.

In fairness to Harper, the dismantling of parliamentary authority began at least as far back as Pierre Trudeau, who began the movement of power to the Prime Minister's Office. Should Mulcair actually become prime minister in 2015 we can expect him to retain many of Harper's powers and policies: PMO domination over MPs, tight message control, and the weakening of anyone in government who might get in his way. Plus continued lying, cheating, and bullying.

Power to the biggest bastard?

This is not a cheering prospect for anyone to the left of Stephen Harper. But the solution to our present problems is not to hand power to the biggest bastard, but to restore respect and authority to our national institutions, many of which were created by old-fashioned Conservative governments. That requires the saving of the conservative soul.

The present Conservatives are no more conservative than the old Communists were the "progressives" they claimed to be. Just as the old U.S. Republicans were systematically hijacked by radical reactionaries, the Canadian Conservatives are under the control of a similar splinter group. Their defection under Preston Manning subverted the old Progressive Conservatives, to the point where Peter MacKay finally sold them out to Harper's Alliance.

Like most splinter-group radicals and other sectarians, the Conservatives most despise those who don't quite agree with them. (For provincial examples, see the Wildrose Party's hatred of the Progressive Conservatives, or the BC Conservatives' hatred of the BC Liberals.) So the old Red Tories have been silenced or driven out of Harper's party, like the Trotskyites out of Stalin's party. Between the Harper Conservatives and the Liberal remnant, a significant part of the political spectrum is simply absent.

In his book Harperland, Lawrence Martin argues that Harper's longterm plan has been to extinguish the Liberals and leave the NDP as an easily defeated opposition. Conservative governments could then rule Canada indefinitely.

The problem with that plan is that no party is ever indefinitely good. The Liberals in power repeatedly ran out of ideas or leaders; when they ran out of both at once, they were finished. Harper himself has run into serious trouble before his majority government is even a year old. When a government's incompetence catches up with it, a real government in waiting has to be sitting on the opposition benches.

'It's bad when things are too good'

A wise Canadian government expects a short life expectancy. It knows its adversaries will eventually win power, and then they too will be kicked out and replaced. The trick will be to win power over a country still worth governing -- a country of engaged citizens who accept and defend our institutions even when they quarrel over policies.

Harper's Conservatives must have alienated many who would hate to vote for the Liberals or the NDP, but who also -- as small-c conservatives -- don't want see our institutions crippled or subverted altogether. At present they can stay in the CPC or keep their mouths shut, or both. But their values mean nothing to the present regime. They have three years before they have to decide whether to jump ship.

They might actually spend those years building a fourth party -- positioned somewhere on the spectrum overlapping the Liberals, with a view to poaching supporters from both the Liberals and from disillusioned Conservatives.

Instead of emulating the worst of the U.S. Republicans, this new party would invoke the values of the old Conservatives: the rule of law, Parliamentary supremacy, ministerial responsibility. It would have a streak of R.B. Bennett's nationalism, the kind that gave us the CBC. Its environmental streak would remind us that conservatism is closer to the word "conservation" than to "extraction."

Such a party might find itself with members in Parliament well before 2015, as Harper's backbenchers think about what kind of conservatives they really are. After all, MPs who believe in individual liberty and free expression can't be comfortable under Stephen Harper's authoritarian rule.

The new party would of course suffer vicious attacks from the CPC, but if it stuck to its principles it could seize the moral high ground from all three other parties. It might even shame them into better behaviour.

The new party, plus the Liberals and New Democrats, could also wrest the national debate out of Harper's hands, and show up the CPC as the radical, extremist and subversive minority that it is.

We would do better with three parties that agree on conserving Canadian institutions and values, than with Liberals and New Democrats fighting the radicals (and one another) with their own dirty tricks and talking points.