One of the Olympic stats most talked about around Vancouver this weekend wasn't medals or scores, per se, but condoms. One hundred thousand condoms are being given out in the Athletes' Village, which adds up to 14.6 condoms for each of the 6,850 athletes and officials expected to attend the Olympics and Paralympics. And apparently, that's what happens when you get the hottest, healthiest young people together for two weeks. 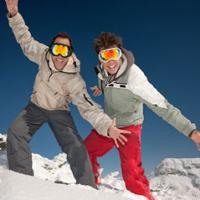 The Gayest Olympics Ever

Or is it? The questions that come to mind are why so many condoms are needed by those bobsledders, skaters and other athletes? And why there's so much interest in the number they go through anyway? After all, I haven't seen any reports of the number of Q-tips or toilet paper needed to fulfill the whims of the denizens of Athletes Village

Officials have handed out free condoms to athletes since the 1992 Summer Games in Barcelona. In the next Summer Games in Sydney, the initial supply of 70,000 ran out, and organizers had to order 20,000 more. Then in Athens, officials brought in a whopping 130,000. And most recently, in Beijing, organizers brought in 100,000, all with the motto "faster, higher, stronger," then auctioned off the leftover 5,000.

So the magic number seems to be about 100,000: for winter or summer. Assuming that most condoms are used between two athletes, the number presupposes 29 encounters in two weeks. That's two a day, and rivals Wilt Chamberlain's rate (who >claimed he slept with over 20,000 women over his life, and bragged about sleeping with 23 women in 10 days).

Athlete friends of mine say that one reason for the condom binge is that many competitors abstain from sex for up to six weeks before the Olympics, supposedly to build maximum testosterone levels and get a competitive advantage. So after their event, more than one champagne cork pops, so to speak.

That's compounded by the fact that many athletes of this level have committed themselves primarily to sport, so don't have partners or kids. And therefore are, um, able to hook up after their events (and body parts) are wrapped up.

Boys (and girls) in the bubble

But it's more than that, according to Jennifer Matthews, who authored the Whistler Guys' Study as part of her graduate work in health promotion studies at the University of Alberta. She followed the sexual encounters of 15 guys aged 19-31 in Whistler, and said certain factors create a nexus for "hook ups."

There can be a kind of bubble created when young people are in a culture of fitness with its focus on physicality, are away from home and their normal environment, know few people and therefore are constantly in meeting-and-socializing mode, and are in a celebratory or party atmosphere. That's all compounded when there is alcohol involved (and who knows what goes on behind the walls of the Athletes Village?).

The bubble feeling creates a sense that the "normal rules don't apply," which can affect the frequency of sexual encounters and the use of protection. In a bubble can be a sense of "living only for the moment."

"If you're not playing by the normal rules, you may be less likely to use a condom," says Matthews. "You might think, 'Oh, I usually do, but I got carried away by the moment.' But STIs don't make that distinction. As human beings, we make exceptions, but viruses don't."

Dr. Reka Gustafson, medical health officer for Vancouver Coastal Health Authority said in a recent Vancouver Sun article that handing out condoms to athletes is an opportunity to put positive health promotion messages out there, and reinforce the message of controlling sexually transmitted diseases.

Matthews cautions that we can't necessarily estimate the number of sexual incidents by the number of condoms being handed out. (Who knows, maybe it's a better souvenir than a country pin?). No studies have been done to track the actual sexual activity by athletes at a Games, or whether athletes take more risks than others.

But because of the likelihood factors, she said there's a strong likelihood that there's a lot of activity. She also said it likely varies by sub-culture: that certain sports have different language, behavioral, and even sexual norms.

But even though there's no proof, and the condom stat is often met with laughter, health officials are probably on the right track. And in addition to the STI issue, it's probably not a great idea to end up with a baby boom nine months from now, even though those kids would be ridiculously genetically gifted.

But what's arguably even more fascinating about this story than public health issues, STI rates, hook up rates, or even unwanted pregnancy rates, is why the public is so interested in it.

Why do you care?

"People like the story of athletes and sex," says Matthews. They're "titillated" by the idea, especially because it all happens behind closed doors.

That plays into the way "media uses sexuality, creating it as mysterious, taboo and exciting. Who doesn't want a part of that? Sexual imagery in the media is almost exclusively young, fit people," so "athletes are sexy by definition.

"She thinks people are also interested in sex stories because in general, when it comes to sex people "somehow feel as though they are missing out on something. Sex has been sold to us as this incredible experience, and I think most people's human, messy, less-than-explosive experiences just can't live up to those expectations."

They grab on to stories like the supposed athletes' sex party because "people want to understand if they are 'normal'" so information they glean from other people's stories, becomes the bar they compare themselves to. Whether or not those stories are true.

"It is ironic that we live in such a sexually explicit culture and yet know so little about sexuality."