Toronto publisher Between the Lines picked up Testimonio after the large Europe-based academic publisher Springer Nature cancelled its contract with editors Catherine Nolin and Grahame Russell and returned the rights to the already peer-reviewed manuscript to them, citing libel concerns.

At the time Nolin and Russell said a review of the manuscript by a prominent Canadian defamation and media law lawyer paid for by the Canadian Association of University Teachers had found there was no unsubstantiated defamatory content that should prevent publication.

The book was based on more than 15 years’ experience working with people and communities in Guatemala directly affected by mining. Nolin is a geography professor and department chair at UNBC. Russell, a founder and director of the advocacy group Rights Action, is an adjunct professor at UNBC and runs field courses in Guatemala with Nolin.

"We need to stand up against corporate threats to getting this kind of work out there," Nolin said. "Instead they caved to that pressure, obviously."

Now that the book’s out, with Between the Lines having done its own diligence before publishing, there’s no question Testimonio is disturbing, strident and clear-eyed about what mining companies are doing in Guatemala and the many ways their projects negatively affect local people.

“We argue that the contemporary predatory actions of Canadian, and other, mining companies are the children of genocide,” as Nolin and Russell put it in the book’s introduction.

“American funding, training, support and facilitation is now a well-documented reality of the genocide of the early 1980s,” they wrote. “Here with this edited work, we are shining a light on the Canadians’ willingness to cash in on the aftermath.”

During nearly four decades of civil war that ended in 1996, hundreds of villages were destroyed and some 200,000 people were killed or disappeared.

Many more were displaced or left the country as refugees. According to the Commission for Historical Clarification, Guatemala’s truth commission, 83 per cent of the victims were Mayan and the state and related paramilitary forces were responsible for 93 per cent of the documented violations.

According to the Canadian government, about half of the publicly listed mining and mineral exploration companies in the world have headquarters in Canada.

Some 1,290 Canadian companies were active in 96 foreign countries in 2019 and the assets they held outside Canada made up about two-thirds of the companies’ total value of $263.2 billion. That included some $22.7 billion worth of properties in Central America and the Caribbean.

“In Guatemala, it is not possible to operate a large-scale mine... without participating in and benefiting from human rights violations and repression, corruption and impunity,” wrote Nolin and Russell.

“There will be no end to mining-linked repression, environmental destruction and human rights violations in Guatemala until there are serious changes in how Guatemala and Canada operate as countries, and how the unjust global economic, political and military order operates.”

The Canadian government encourages and facilitates Canadian companies’ mining operations in Central America regardless of the social and environmental costs, they wrote. “It is an unjust and sorry state of affairs, profitable for mining companies, shareholders and investors, harmful and deadly for many Guatemalans.”

Canadian companies’ activities in Guatemala and other countries are underreported, Nolin and Russell wrote.

“With some recent exceptions... the Canadian mainstream media is not providing proper coverage to the breadth of human rights violations and repression, corruption and impunity that characterize the operations of Canadian companies in Guatemala, let alone around the world,” they said.

“The lack of proper media coverage perpetuates a lack of knowledge amongst the public that in turn reinforces the impunity of the companies and investors.”

It’s a dynamic familiar to Angélica Choc, a Q’eqchi’ woman who has been pursuing justice in Canadian courts for the murder of her husband Adolfo Ich 12 years ago by the then head of security working for a Hudbay subsidiary.

Ich was a land defender and didn’t deserve to be assassinated, she said. She and her children miss him, though they go on with their lives and continue the struggle, she added. “It affects me every day and it hurts me.”

She said the case, and two others related to it, are examples of the kinds of crimes being committed on behalf of Canadian companies in Guatemala. While the Canadian cases are ongoing and yet to be decided, the accused Mynor Padilla pled guilty in a Guatemalan court in December to killing Ich and paralyzing another man, German Chub.

“The media has a huge responsibility because they’re the ones who inform Canadians on an ongoing basis about these things and if they don’t do their job people won’t know,” Choc said in an interview via video call from Guatemala City with Russell translating.

“The Canadian government is not doing anything about this,” she said. “What is needed in Canada is for more people to become indignant about what’s going on here, then unify forces so we can work together to address them.”

Choc said that people in Canada need to understand what’s going on not just intellectually, but also in their hearts.

“There the mining companies may talk publicly about all the development they are bringing about, the beautiful projects that they’re supporting here, but this is not the reality that we live on the ground,” she said.

The companies extract valuable resources while providing only small benefits to local communities, she said, adding they operate by trying to co-opt community leaders and when that doesn’t work turning to threats and intimidation. 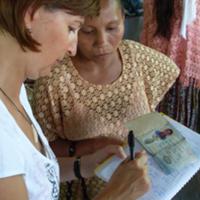 “This is not development for us,” Choc said. “Development for us begins with consultation and consent.... This isn’t development, it’s destruction of Mother Earth. They’re contaminating our water sources, rivers and lakes, and water for us is life.”

As densely detailed in Testimonio, it’s a pattern that repeats throughout Guatemala and around the world. A 2016 Justice and Accountability Project report cited in the book found 28 Canadian companies were involved in 44 deaths and 403 injuries in 13 Latin American countries over a 15-year period.

“That the harms, evictions and violence caused by Canadian companies are occurring in Guatemala and elsewhere does not make these issues any less ‘Canadian,’” they wrote. “Once defined as significantly ‘Canadian’ problems, it becomes clearer what needs to be done, and where.”