To truly respect Indigenous people’s right to free, prior and informed consent for industrial projects on their territories, companies and governments need to accept that sometimes the answer will be no.

That’s the main message Luis Fernando García Monroy wanted to share with Canadians on a visit to Victoria and Vancouver this week.

García is a representative of the Xinka people in Guatemala. They want a mine in their territory, owned by Vancouver company Pan American Silver, to remain closed. In 2017, Guatemala’s highest court for civil cases ordered the mine shut down while the government consults local communities.

“They should respect the decisions of people,” said García in an interview through a translator. “What we’re asking the company and the Guatemalan government is to respect our human rights and our ways of life and traditions.”

“The company sees it as an administrative process that they just have to get through in order to restart the mine,” García said. “They can’t see it that way. They have to understand the result can be a yes or a no.”

Similar issues are being discussed in Canada. British Columbia is in the process of becoming the first province to recognize the 46 articles of the United Nations Declaration on the Rights of Indigenous Peoples, which has sparked debate over whether they provide a veto for Indigenous people over projects on their territories.

Pan American Silver acquired the Escobal mine, along with four others including gold mines in Canada and Peru, as part of a $1-billion takeover of Tahoe Resources completed earlier this year.

Opposition to the mine in Guatemala’s southeast goes back at least a decade, beginning with concerns about how tremors that seemed related to mining were damaging nearby homes, and at times has been met with violence.

García, who is now 24, was shot during a 2013 confrontation captured on a mining company security camera. Wounds to his back, stomach and face have required several surgeries, and he still has no sense of smell or taste and it’s hard to breathe, he said.

“I’m one of the many survivors of violence carried out by these types of companies with the economic backing of interests of Canadian and U.S. investors,” he said. “There’s not a single mining project in Guatemala that doesn’t have violence, that they haven’t assassinated people, that people haven’t gone to jail.”

García said Canadians should be asking whether their pension funds are investing in companies involved in these kinds of activities.

He and three others injured in the same attack sought justice in a B.C. court and in July reached a legal settlement with Pan American that included an apology.

When Pan American bought Tahoe, CEO Michael Steinmann was quoted saying the company hoped to work with communities around the Escobal mine to gain their support.

“At this early stage we’re just interested in learning from the different stakeholders and the different parties within the communities and getting their viewpoints,” Siren Fisekci, Pan American’s vice-president of investor relations and corporate communications, said in an interview this week.

“We’re responding to requests for information, and in time we’re hopeful that will evolve into more of a constructive dialogue. At this point, it really is just a listening phase.”

When Pan American took over Tahoe, the Guatemalan court had already ruled that the mine must be closed during consultations with local people.

That process is governed by the International Labour Organization’s convention 169 on Indigenous and Tribal Peoples. The convention contains measures similar to UNDRIP that require governments to consult with Indigenous people on matters that directly affect them and says the goal should be reaching consent or agreement.

“To the degree we can, we are working collaboratively with the government and the different stakeholders to resolve those challenges, but it’s not a process that we lead,” Fisekci said.

The company has to be mindful of both the communities and the Guatemalan government, Fisekci said. “We have to work collaboratively with both groups and address those challenges and not be critical of either party in that process.”

García said that while Pan American says its ownership of the mine is a new start, little in his view has changed. “We see on the ground, it’s exactly the same. All the same people are still there. All the people from the subsidiary are still there.”

Opponents of the mine continue to be threatened and attacked by people supporting the mine, he said.

Government officials implemented a “state of siege” that limits movement and militarizes the area, he said, adding that by his count there have been 13 assassinations connected to the mine over a long period of time. “None have been investigated. They remain in impunity.”

Around 180 mine opponents have faced false allegations, he said. “Some of them have actually spent time in jail before being cleared.”

There are peaceful protest camps in two communities, Casillas and Mataquescuintla, blocking road traffic to the mine. “As an example of why we’re saying Pan American Silver isn’t respecting the constitutional court is because last Thursday there were two trucks that came through the Casillas checkpoint that had materials destined for the mine,” García said.

Asked about the shipment that included iron balls used in mineral processing, Fisekci said, “As part of our care and maintenance we still need to bring in supplies, and I understood those trucks were stopped at some point trying to access the mine.”

Ultimately, the Xinka want their voices listened to, García said. In multiple community consultations and referendums, people have consistently opposed the mine, he said. The court confirmed it’s up to the Xinka how they want to participate in the consultation, he added.

The courts will eventually determine whether or not the government has met the requirement to properly consult the Xinka on the mine, García said.

The Guatemalan ministry of energy and mines didn’t respond to a request for comment by publication time.

The Union of BC Indian Chiefs, an organization representing many First Nations in B.C., met with García this week to discuss the shared experiences that Indigenous Peoples face when standing up to resource development projects. 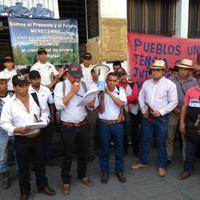 Why Guatemalan Indigenous Communities Are Fighting a Canadian Mining Giant

“The challenges for the Xinka people are ones we are very familiar with, and we stand in solidarity with their efforts to assert the rights that are affirmed and enshrined in the United Nations Declaration on the Rights of Indigenous Peoples, especially the right to self-determination,” said Kukpi7 Judy Wilson, secretary-treasurer of the UBCIC and a member of the Neskonlith First Nation, in a statement.

For García, the bottom line is that “people don’t want mining in their territory as a result of all the things they have suffered: psychological, physical and environmental damages.”

He said he’s optimistic that will be the end result. “The strength of the population is behind us. We believe the voice of the people is what’s going to make this decision in the end.”

García said he remains hopeful the community’s right to say no will be respected.