When Lorna Brown and Wanda Good stepped up to make their film Adaawk, there were already a vast number of stories about missing and murdered Indigenous women and girls.

But most of them were told by people from the outside, who visited the region and told it from their perspective, said Brown, who directed and co-produced the film.

“We just wanted our stories to be heard from us and from our perspective, and I think that’s what really makes Adaawk a very unique film,” said the Terrace-based director.

Both Brown and Good understand what it is like to have a loved one go missing or be murdered.

Good lost two of her cousins to Highway 16, or the Highway of Tears. Lana Derrick went missing from Terrace in October 1995, and Alberta Williams was found murdered near Prince Rupert in 1989.

The concept for the documentary film came from Good, an advocate for missing and murdered Indigenous women, after the Highway of Tears Memorial totem pole was raised near Terrace on Kitsumkalum territory in 2020.

“Wanda and my sister, Gladys [Radek], both really wanted to tell the stories of all the families, because it is our stories, it’s our history,” said Brown.

That’s also the reason for them selecting the name Adaawk, which translates to Oral History, said Brown: “It brings together the stories and the history, so that the families can tell their stories.”

Brown and the cinematographer, Michael Bourquin, travelled through northwest B.C. and visited several families of missing and murdered Indigenous women and girls to interview them. It is Brown’s first attempt at directing a film.

“I came up with the questions myself, and there was a certain comfortableness with the family members because a lot of them knew me and I knew them, and some of them are even family.”

Over 16 families from the northwest spoke to Brown and are featured in the movie, including Ramona Wilson’s sister and mother Brenda and Matilda Brown, Mary Jane Hill’s daughter Viki Hill and Cindy Martin’s sister Sheridan Martin, among others. Wilson went missing in Smithers in 1995, Hill on Highway 16 in 1978 and Martin in Hazelton in 2018.

Brown interviewed her brother Tom Chipman — Tamara Chipman’s father — and sister Gladys Radek for the film. Brown also used an old recording she had of the first Highway of Tears walk in 2006, with original walkers Florence Naziel, Betty Joseph, Gracie Holland and Birgitte Bartlett appearing in the film.

The whole concept of the film was to be able to honour the missing or murdered loved ones for who they were and humanize them, said Brown.

“Often times, these women have been reduced to a statistic, or they just get labelled like ‘vulnerable,’ or ‘targeted,’ or all of these different names. And we really wanted to put the families’ perspective of how they were loved or what type of personality did they have... to shine a light on who they were as a person.”

As a family member of a missing and murdered woman herself, Brown felt other families were able to open up to her while sharing these stories about their loved ones. So even though it was painful revisiting the past, in a way it also brings healing to them because they’re able to tell their story.

Making the film and being a part of the process of telling these stories was a very rewarding experience for the entire team, said Brown.

“So for me it was rewarding, and then at the same time there was heaviness and kind of this burden of getting it right, and I felt it’s maybe because I live the story myself,” said Brown. 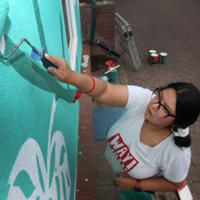 Brown held a private screening of the film once it was completed for all the families that had been interviewed. All of them came to Terrace and watched the film in contemplative silence, she said.

“The overall feedback that I got from them was, ‘I finally feel heard, I finally feel like our story is told in the way it was meant to.’ Hearing that felt like a huge relief, because you feel such a huge responsibility to portray their loved ones the way that they wanted them to be remembered.”

Adaawk is Brown and Good’s attempt to educate the public about missing and murder Indigenous women and girls.

“We need people to understand that they need to be a part of the solution, and they need to be able to recognize that this is going on in Canada and in northwest B.C. and that, obviously, it’s unacceptable.”

'Adaawk' premiers at the ImagineNative film festival from Oct. 21 to 23. Tickets can be obtained through the film’s website.