It’s nearing midnight, light lingering in the western sky, and four artists are setting up in downtown Smithers.

One aims a projector at a wall-turned-canvas, an eight-by-15-metre expanse of concrete, and the building’s façade comes alive, colour and light projected like a promise. The artists begin their task, tracing the contours outlined on the building into the wee hours.

For the odd passerby at this late hour on Main Street, this might look like the beginning. In fact, it has taken years to get to this point. There were grants to write, families to engage, a wall to prep and a pandemic to navigate, setting this moment back nearly a year.

Over two weeks this summer, the artists work from the dead of night into the heat of day, taking the project from an outline to a colourful mural honouring the lives of women and girls who have gone missing or been murdered along this stretch of the Highway of Tears.

The result is a display of love and grief that spans two walls and two storeys on the Dze L K’ant Friendship Centre.

In the weeks to come, under the blazing sun, people will stop to admire the mural. But tonight, it’s cool and mostly quiet in the darkened streets as the task of turning two years of connection and dialogue into art gets underway.

Though the mural is literally paint, brick and mortar, it was “made by tears and laughs,” says Elmira Sanati Nia, holistic health worker with Dze L K’ant Friendship Centre. Sanati Nia organized workshops last summer with the artists and families of murdered and missing Indigenous women and girls — gatherings marked by food, ceremony and, most importantly, remembering.

The process began a year earlier, in 2019, with a grant from the federal government’s Women and Gender Equality department. The funding is a result of recommendations made by the National Inquiry into Missing and Murdered Indigenous Women and Girls.

“It was a natural progression, because the Friendship Centre has been working with families for a long time,” says Dze L K’ant housing advisor and economic development officer Lydia Howard.

None of it would have happened without the families, she adds.

In total, about 60 family members provided input for the project, via in-person dialogue that began last summer and moved online over the winter as the artists worked with families to design and refine the mural’s details.

It was a process unlike any the artists had undertaken before.

Of the handful of murals the foursome has done together, this one took the longest to develop.

“It needed that time and that space,” Hebert says of delays that set the project back a year. “I think some of the families needed to take time as well.”

The mural spans two walls, the smaller of the two called the Lost Ones Wall. It is dominated by a large moon, representing darkness. A family of bears symbolize the land, as well as maternal instinct, honouring the women who have kept the memory of their loved ones alive.

Turn the corner, and you’re looking up at the Resilience Wall. Representing light, it includes a sun and crests representing the five Wet’suwet’en clans and their territories. It also contains a symbol representative of each missing woman, contributed by their families: a feather, a butterfly, berries, flowers, dragonfly and an owl.

Also important in the design was traditional Wet’suwet’en regalia — red dresses, a symbol of missing and murdered Indigenous women. The movement they embody, the fabric appearing to sway in the breeze, symbolizes life.

“It was always clear that it should be something that should not re-traumatize people,” Gastiazoro says about the final design. “Shedding light on the beauty of the life that we lost more than the loss itself.”

Two months after the artists began their outline — two years after the process began — darkness is exchanged for light. A tent containing painting supplies has been swapped for one offering smudging ceremony. Children play and families gather under the mural’s brilliant colours and the late summer sun.

“This is unity. This is love,” says Catherine Thomas at the mural dedication held early September. She says she’ll think of her niece, Leslie Currie, who died on an Alberta reserve, whenever she looks at the mural.

“We still don’t know what happened to her, although the police closed the file without family consent,” she says. “I know I’m not alone.”

One at a time, the families approach the microphone, each expressing love, grief and frustration over the loss of their loved ones, years or even decades later.

“I give so much thanks to the people who organized and to the artists who came up and did such a beautiful job commemorating our missing and murdered loved ones,” says Delee Nikal, who has lost numerous friends and family along the Highway of Tears.

But there needs to be more, she adds. Out of 231 Calls for Justice that came out of the National Inquiry into Missing and Murdered Indigenous Women and Girls, only about a dozen have been fulfilled.

For Jacquie Bowes, the day is especially poignant. It’s been three years, almost to the day, since her cousin Jessica Patrick went missing. The family found her body two weeks later, abandoned just off the road on Hudson Bay Mountain, the peak that overlooks the community and today’s ceremony. 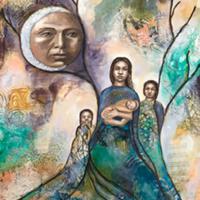 “The only way that we’re going to get anything is to keep making noise, to keep Jessica in the public eye, and to keep saying her name,” Bowes says.

For the Wilson family, the work to raise awareness for missing and murdered Indigenous women and girls has gone on for decades, since Ramona Wilson went missing from Smithers in 1994. Her body was found nearly a year later just outside the community.

“To have this mural and to have this awareness for many of our loved ones that have gone missing or that have been murdered in our communities, to have this here in the community of Smithers who so many times have shut the door in our faces — we know that the doors are starting to open,” Ramona’s sister, Brenda Wilson, tells those gathered.

“They included us. They got feedback on what we wanted, how we wanted it to look, and that’s what we need more of. We need you to include us, the families of missing and murdered loved ones.”