Sometimes I think there are two kinds of people in the world — talkers and listeners. The Vancouver Podcast Fest brings these two groups together in robust fashion.

In its latest edition, the festival has gone home. And by this I mean everyone, all the podcasters and their fans (pod peoples, perhaps?), are at home — listening in, talking back, yakkety-yakking non-stop. Maybe there is a third type of person: one who simply wants silence. But who pays attention to them?

Over five days beginning Wednesday, local and international podcasters will do their thing through a variety of events — talking, listening, arguing, informing, contradicting and entertaining.

No two women are better versed in the art of discussion than Sandy Hudson and Nora Loreto, the eponymous hosts of Sandy & Nora Talk Politics.

The pair are headliners at this year’s festival, an ideal scenario as no one seems capable of talking about anything other than politics at the moment. But while the American election continues to dominate the daily news cycle, it’s only one topic of discussion for Hudson and Loreto.

Their conversations are discursive and far-ranging, incorporating everything from the impact of COVID-19 on racialized communities to police violence to the ongoing failures of the CBC. (The Current’s host Matt Galloway comes in for a particularly well-deserved tongue lashing.)

Even a casual listener can’t help but be drawn into their conversations — erudite, impassioned and a bit sweary. A lot of fucks are given.

But there is also a great deal of positive, hopeful stuff that comes out of their exchanges, ideas that would make life better for ordinary Canadians. A recent episode dedicated to big ideas is well worth a listen.

Hudson and Loreto are old-timers in the podcast world. Their first episode aired on Feb. 16, 2017, and they’re currently up to 127 shows. That’s a lot of talking. But much has happened in the last three years.

On the day The Tyee spoke to them, the votes were still being counted in the U.S. election. Anxiety hung heavy as smoke. Earlier on in their show, the pair had predicted a victory for Donald Trump.

Although they were relieved that Joe Biden and Kamala Harris would likely carry the day, it was mixed with a more nuanced understanding of what might happen afterwards. “Even if Trump doesn’t win, he still wins,” says Hudson.

I ask Hudson how she’s holding up after a week of U.S. election madness, and she admits that while her anxiety levels have escalated, she’s been so busy that it’s kept her from overindulging in the news cycle. “I was feeling a lot more nervous before the election.”

Hudson is currently finishing her law degree at UCLA and says that California is actually quite calm. “L.A. feels pretty good.”

Still, as we talked, news of U.S. polling stations being evacuated due to bomb threats was rolling out and efforts were under way to halt the vote count.

Hudson was philosophical about the ongoing drama. She notes that media’s obsession with the vote count meant that other stories, such as the surging numbers of COVID-19 cases, could be sidelined.

But before we veer off into that grimmest of stories, the pair says they’re simply happy to be a part of the coming events in Vancouver. It’s their first Podcast Festival and they’ll be doing a live show.

Hudson and Loreto have a big contingent of fans in the city, a fact that Loreto found out almost by accident when a friend from Vancouver told her a story about overhearing their voices in a neighbouring apartment and thinking, “Oh, are they here?”

“But it was just our podcast,” she laughs. Although the pair won’t actually be present in the flesh, a fact that bums them out, Vancouver poddies will be able to take in the show on Nov. 20 through the magic of audio.

Both have opinions about the ardency of podcast fans and why the medium has grown exponentially in recent years.

“I’m not all that surprised,” says Loreto. “We’ve been doing it for a long time. The show attracts a mix of people, not necessarily from the [podcast] community. There’s a desire for style and substance. People really fall for the show. I met someone who said, ‘I feel like I talk to you every week.’”

Hudson cites a study that showed audio was the fastest growing media format in the world. There are a variety of reasons, some practical and some more esoteric, she says. “You can listen to it wherever you are, whatever you’re doing. In your car. In a store.”

In addition to inflections, jokes and expressions of genuine anger and outrage, audio offers more bandwidth for nuanced communication. It’s an unfettered place to have meaningful discussion.

Loreto says the enduring appeal of radio, especially in Canada with the legacy of the CBC, means that people gravitate to voices they trust. But they’re also looking for more in-depth and substantial coverage and discussion of issues that never appear in mainstream media.

Whether it’s the immediacy, idiosyncrasy, or simply the fact that you get to hear complex ideas tackled by smart people without any watering down, podcasts often have outsized impact on loyal listeners. It’s a devotion to authentic humanity, helped along in Sandy & Nora’s case by a resolutely lo-fi approach.

Was politics where the pair started, or did it evolve as the show developed?

“I don’t know if we ever really decided, it was just an extension of our conversations,” says Loreto.

The pair first met in Toronto, both working as community organizers. Once they started recording themselves, it was evident that there was an immediate synergy.

“I think it would be impossible to do without the relationship that already existed,” says Hudson.

The ease and rapport of a long-term friendship is not something that can be artificially created, but given their comfort level with each other, have they ever disagreed on something?

Neither one has an immediate answer.

“Maybe about the importance of big-enough strategies?” offers Loreto, meaning direct ways of addressing the issues they talk about.

“It’s important to work through perceived conflicts,” says Hudson. “It’s useful to know how to defend your position.”

Asked if listeners are ever surprised by the level of anger often present in the pair’s discussions, the answer is a clear no.

Both hosts say that anger and expressions of it are common with the male hosts of talk radio, but that women voicing not only their rage but also offering ideas and solutions is far less common.

Hudson says that part of the program’s motive is to “solve the struggles that touch many of us living in this country every day.”

Loreto sees the anger expressed clearly and eloquently as a way to reach people: “The way we speak, that forcefulness connects.”

When asked about what makes them angry, it often boils down to what Hudson describes as “meaningless symbolism in politics” and the lack of discussion about actual policy.

“Let’s talk about actual politics when we’re talking about politics,” she says.

Loreto identifies another rage-inducing aspect of political life. “I’m mostly angry at the excuses, whether it’s a good economy or a bad economy. I’m really sick and tired of the reasons those in power find for refusing to do their jobs.”

As the pair note, if ever there was a moment for big picture ideas to enter the larger public conversation, it’s now, in this time of seismic change.

It’s a point many other progressives are making, most notably in the post-election U.S., with figures like Alexandria Ocasio-Cortez calling for the Democratic party to let progressives lead, and even old Noam Chomsky weighing in.

In a recent episode dedicated to the U.S. election, Hudson noted ongoing struggles around the globe from Brazil to the Philippines to the U.S. against populist regimes. “When are we going to talk about it?”

The same forces that contributed to the rise of populist forces in the U.S. also exist in Canada, despite the fact that Canadians pride themselves on being more tolerant and benign. But these qualities perhaps make them more dangerous, as they’re harder to identify.

With the continued narrowing of discussion around the political spectrum, podcasts can offer a place for progressives to engage in a more expansive way. (Progressive is a word that seems to stand in for radical, but truth be told, many of the things discussed on Sandy & Nora seem eminently reasonable and desirable.) 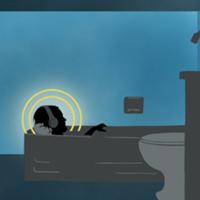 In this pandemic moment, all kinds of new ideas could be tried out: free higher education or a national telecommunications system in Canada.

“So that every kid has equal access to Wi-Fi, and they’re not sitting in the parking lot of Tim Hortons trying to do their homework,” says Hudson.

Loreta says it isn’t a lack of ingenuity or resources but actually ideological blocks that derail a lot of progressive ideas. “Blow it open, there are lots of ideas,” she adds.

Listening to both of these women, smart, incisive and funny as hell, I feel like a window is opening up. What if there was a different way to do things, an approach that took as its genesis a human-centric approach? It starts by talking about it.

Tickets and information about VanPodFest are available here.