Who says women aren’t funny? If ever there was a group to crush that old chestnut to smithereens, it would be the women of the Smash Comedy Festival, taking place next Thursday to Saturday in Vancouver.

Organized by the Nasty Women improv and sketch comedy group, the festival highlights women-identified and non-binary performers. (Full disclosure: The Tyee’s Emma Cooper is hosting a comedy show as part of the festival and running a weekend workshop.)

On the eve of their second festival, The Tyee posed 10 questions to organizers Racquel Belmonte and Stacey McLachlan about the explosion of diversity in Vancouver’s comedy scene and what it takes to get a festival off and running. The interview has been lightly edited.

The Tyee: What’s Nasty Women Comedy? And tell us more about the Smash Comedy Festival.

Nasty Women Comedy is a 10-woman improv troop (and/or supergroup?) based here in Vancouver. We’ve been performing at the Biltmore Cabaret monthly for two years now, and have also performed as part of JFL Northwest, Vancouver International Improv Festival and the Del Close Improv Marathon in New York.

We decided to start Smash Comedy Festival last year to create an opportunity to spotlight the other wonderful women, trans and non-binary performers in the scene in one big weekend, and to raise money to send girls and LGBTQ kids to improv camp to help foster under-represented voices in comedy. Also, selfishly, it’s just fun to see our hilarious friends on stage. Put on the show you wish to see in the world, right?

What makes this festival different from other comedy festivals?

We know that representation absolutely matters. Our audiences at Nasty Women shows are passionate about our comedy because we use the stage to tell different stories and perspectives that you don’t always see in male-dominated shows or festivals. With Smash Fest, we’ve invited female-identifying and non-binary comedians specifically to step up and show their stuff. Nothing against our male comedy companions, but we absolutely could do with more variety of voices on stage. We’ve got things to say!

You already run Nasty Women Comedy and each have your own comedy pursuits. Why build something else that you have to promote? Do you have a weird love for endless email and social media posts?

We're obsessed with attention! More! We know that bringing the community together is such a beautiful, empowering, feel-good thing, and we’re lucky enough to have the skill set and resources to help get other peeps into the spotlight, so why not give a little back?

What was a highlight from last year’s festival?

The Sleepover Improv show was electric. We threw 20 of our favourite improvisers into two super-groups and made them do scenes inspired by Truth or Dare. The energy and excitement from them all playing together was palpable. I also pretty much cried with joy the entire time during our “Weird Gal Karaoke” — a show full of parody songs written and sung by comedians. Everyone was laughing and singing along and it just felt like the perfect end to a weekend full of community and comedy.

Which shows are you most excited about this year?

Nasty Women is kicking off the festival with our show on Thursday at the Biltmore, and we’ve got a special guest we’re all really excited about — Lil Clitty, an alter-ego of Ese Atawo who raps the most hysterical and filthy songs. We’re also so pumped about our closer on Saturday, The Homo-Normative drag show, curated and hosted by local drag artist Homo Hardware. It’s pretty much guaranteed this is going to turn into a dance party. 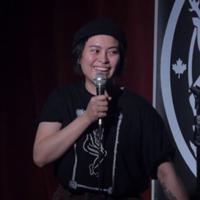 A New Wave of Comedy Grows in Vancouver

What hard lessons did you take away from your inaugural event?

That you can’t please everyone, unfortunately. We have the very fortunate problem of having more talent in this community than we could squeeze onto the festival lineup, so learning to say no and to be strict about numbers on each show was really important to bring into this year.

What dreams do you have for the festival? World domination, making a living, seismic cultural change?

We’d love to get those who don’t identify as cis-dudes in our audience to say “I could do that” and get into comedy themselves, but more importantly, we’d love to ruin every other comedy show’s ticket sales for the week because everyone is committed to our thing instead. We got to send four kids to improv camp last year. In the future, the dream is to send more and more until improv camp is like “That’s enough, please stop!”

Do you have any advice for artists running shows and organizing independent festivals in a ridiculously expensive city?

Where can folks learn more about your event?

What is the nastiest thing folks can do to change the world?

Seek out fresh voices and under-represented perspectives in the art you consume. Maybe buying a ticket to our festival is a good place to start?