[Editor’s note: In Love Me True: Writers Reflect on the Ins, Outs, Ups and Downs of Marriage, editors Fiona Tinwei Lam and Jane Silcott assemble diverse essays and poems about arranged marriage, same-sex marriage, adultery, divorce, polyamory and much more from writers across Canada, from well-known names like Susan Musgrave and Lorna Crozier to emerging voices. "Cooking Class & Marriage Lessons," an essay by Jane Silcott, is the second of two excerpts. Find the first here.]

A friend invites you to a cooking class. You agree because she’s a good friend, a dear friend, but truly, you’d rather do long division in your head. You’d rather do push-ups or side planks or both. You’d rather lie on train tracks and die romantically, a train filled with oversized industrial stoves and sautéed duck breasts rolling over you, then serving you up, still warm with morel sauce on the side.

Your husband makes you sit in the front row. Your husband becomes the guy in the class who makes jokes out loud, so the chef starts using his name and you realize you’ve married the class clown. How can you have been married so long and not known that? As the chef lays his equipment out in front of him and begins to talk, the two of you look at one another. “She should be here.” She is your daughter. She, who watches cooking shows to relax, who gets in the kitchen and immediately becomes a young woman full of certainty, a young woman who can command you to sit down and stay out of her way, and you always do, feeling proud and surprised and yes, a little hurt, all at once.

You watch the chef with his whites on, his large frame, belly firm but round, filled with excellently cooked and loved foods, and hands — deft, accomplished, certain — moving above the counter, reflected in the angled mirrors above, so you get a bird’s eye view. You will tell this to your daughter later, all agog. “Mirrors!” you will say, “like on TV!” She will look at you, in that tired way that your worldly, near-grown children have, “Mum, we have those at school.” How could mirrors be in your child’s east side school when the music programs were cut? You will think of your own cooking classes at school, long ago in another city, another neighbourhood, the class taught by a woman who seemed more impressed by the laundry equipment than the stoves. A woman who would bring her dirty clothes to school and wash while she taught. The only thing you learned in her classes was to clean up as you cooked.

When the chef talks about his wet hand and his dry hand — the hand that handled the meat and the hand that didn’t — you steal a look at your husband to see if he is paying attention. He is, and when the chef does something remarkable and memorable, one of those little tricks you can take home and teach to your daughter, you look at one another again and know you are both aching in the same way.

Meanwhile, the chef goes on. You wonder when it can be over and when you can have your wine back. The chef has made everyone put their glasses on the island, an island half the size of your house and almost as far away. He said it was because he didn’t want anyone to knock a glass over accidentally but you think he doesn’t want 20 inebriated adults playing with knives and fire.

After you sit through the lesson about duck with morel sauce and blinis, a lesson that’s flown through your head so quickly it might have been quantum physics or gene splicing, you and the woman next to you confess to one another that you hate cooking. You decide this woman might be your new best friend and then wonder if it was destiny or survival that inspired you to marry a man who can turn on the giant fire-breathing stove without pause and pour half of Italy’s supply of olive oil in a pan, then watch as it spreads, looking the happiest he’s been all day.

“That’s too much oil,” you tell him. “The duck is going to swim again.”

You turn away after telling him his love of oil is what’s made you fat, and he lies one of his marriage-saving lies, and you mix milk into the bowl for the blinis, which you’ve learned are just potato pancakes with an exotic name.

A moment later, he holds one of the ingredient containers filled with brown liquid above the pan. “Are we supposed to put all this in?”

“Yes,” you say, annoyed because hadn’t the chef said everything was pre-measured?

“Just put it in,” you bark, wondering if the edge in your voice comes from the military ancestors lining up in the back of your head, or your mother who was always good with commands.

A second later you both look at the tray and recognize a third container with white, creamy liquid that you were supposed to have used. And so what had you put in with the duck? The water from the morels. Water that had been used to reconstitute the mushrooms that are notoriously difficult to clean. 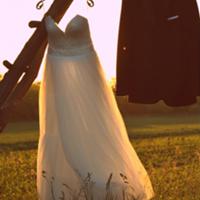 What We Mean When We Talk about Marriage: A Book Excerpt

Your husband is silent. Stone silent. The kind of silence you have learned to recognize after many years of marriage is best to leave him alone in. You turn back to your duck.

The chef arrives at your station when you are slicing the meat. You think you’re doing fine, but he says, “How ’bout I do that for you?” and takes the knife from your hand. You suppress a small, but familiar feeling of dismay — you’ve lived a life of people taking food preparation tasks away from you — and watch as perfect medallions of meat fall from the knife. “Voilà,” he says.

And “Voilà,” you and your husband repeat as you walk to the dining area. You’re smiling now, thinking (again) how clever you were to marry a man who loves you anyway. Then the two of you savour your meal, chewing the wood chips with your morels as if they were there on purpose.