Faded and sun-dappled photographs decorate the cover of Mudgirls Manifesto: Handbuilt Homes, Handcrafted Lives. The images evoke the feeling of a cherished family album — that is, if your family built quirky homes fit for hobbits.

Written by the Mudgirls Natural Building Collective, the book catalogues the members’ experiences constructing houses out of natural and recycled materials like cob, straw bale and wood, while showcasing their vision of building community free of capitalist, hierarchical and patriarchal structures. To date, the Mudgirls have worked with hundreds of clients and volunteers on building projects big and small, from entire houses to benches and ovens. Anyone with construction needs can hire the Mudgirl crew or host a Mudgirl workshop to get the job done while supporting a learning environment for natural-building enthusiasts.

So, who are the Mudgirls? They are an 11-member, all-women collective living throughout Vancouver Island, the Gulf Islands, Vancouver and the Sunshine Coast. For the majority of them, being a Mudgirl is their primary source of income. The group formed over a decade ago from the desire to obtain honest shelter and find meaningful, enriching work. Since then, the feminist collective has hosted workshops that provide people the opportunity to gain skills in natural building and foment a revolution.

The Tyee spoke with two of the Mudgirls, Clare Kenny and Molly Murphy, about getting their hands dirty, disrupting norms, and being a badass in everything they do.

How did you become Mudgirls?

Murphy: Both Clare and I were original Mudgirl members. We were both invited by our founder, Jen Gobby, after taking a workshop with her in the early 2000s. She reached out to all those people who had taken workshops and offered them the idea of starting a collective, and so both Clare and I jumped at that opportunity.

How has the collective changed since it was founded in 2007?

Kenny: When we started out, Jen Gobby was the only person who was skilled in natural building and knowledgeable of the materials we were going to work with. When we started out, we were just a bunch of people driven by pure necessity, looking for an alternative to the housing economy as we saw it, to provide ourselves and our families with shelter. Over time, we’ve become more skilled and we can see the further potential for what we’re doing not just as builders, but as activists, really.

Do you wear the Mudgirl identity every hour of every day, or is it a role that you play a few times a year?

Murphy: I’m pretty sure that most of us wear a few hats, but even when we’re wearing that hat we have Mudgirl skin on, all the time. I think the Mudgirl identification is pretty deep, and it has permeated into all the other aspects of our life, in how we communicate and how we conduct ourselves. I am certainly not the same person I was honestly 11 or 12 years back. I know that I’ve changed for the better as a result. There’s so much I’m learning to do in our society, and the Mudgirls has really facilitated the ability to just be less capitalistic, less patriarchal, less oriented towards white-picket fences. The different alternative ways of doing things, and I think, yeah, we all wear that all the time.

Can you take me through the process of building a cob house?

How do you determine which earthen materials are the right ones?

Murphy: Different materials form differently. Some are [insulating], some are thermal mass. Thermal mass is something that’s constantly trying to regulate the temperature between the inside and the outside, whereas straw or wood chips or any kind of [insulating] material is a barrier between two environments. Keeping the cold out or keeping the heat out, depending on what kind of situation you’re in. There’s no sort of one material that works for every situation, really.

Kenny: You need to really adapt and have a conversation with your environment. And also, economics comes into it. What do you have available on your property, what’s right there, what makes sense for you because you have a lot of it as opposed to something that maybe you need to have shipped from far away, like a straw bale. And also the embodied energy: the economics for you as well as for the environment.

How long does it take for you to build a house?

Murphy: It’s super variable [based] on the size of the building and also the monetary output. A lot of our clients aren’t super wealthy people, so we often build in stages that meets their financial leakage — how much money they’re willing to put out at a certain time. We can easily build anywhere from [a] 200 to 1,500 sq. ft. single-story, cob house in one season, for sure. It just depends on the amount of output people are willing to put towards it, whether it be their time or their money.

Mudgirl-built homes have a lot more character than your average dwelling. How have the neighbours reacted to them?

Kenny: Neighbours play an important role in natural building, especially if you are in a zone where you’re going to be dealing with inspectors and building codes, because people get uptight about what’s going on next door. So, you need to get your neighbours involved, certainly. We haven’t had any problems with people shaking their fists and saying, “Your mud house is ugly. I don’t want it next door to me.” That hasn’t happened. [During] the process of building we do workshops and that can involve a bunch of joyous people slinging mud around and playing music while they’re doing it. So, maybe neighbours prefer the sound of chainsaws and cement mixers and they might not like us. Design-wise, we haven’t had any problems like that. Most people find [the houses] utterly charming.

I’ve got to tell you a story of this experience we’ve had: [there] was a little sort of cabin we built pretty much in the front yard of a cul-de-sac in North Vancouver. The neighbours knew what was going on, but still we had people coming outside in pyjamas with their bowls of cereal [and] with their mouths open being like, “What is happening right now?” It was pretty cool, but they ended up loving it.

Has the collective ever received any negative comments from outside construction companies?

Murphy: I don’t know if Clare has any experiences of it being negative, but I think it’s [been] mostly surprise going, “You can do this like this? You can make a living like that? That’s so crazy, that’s amazing. How did you do it?” I think that’s why we wrote the book in the first place. We’ve been doing this crazy thing for 10 years and it’s still going strong.

It’s a very supportive atmosphere, which is really refreshing and liberating for some people who we’ve collaborated with. Some of our feedback has been that they find our worksite much nicer to be in than typical building sites, because they didn't show aggro or [were] unsupportive.

An essential component of the Mudgirl creed is to provide free childcare at every job site. How did that become one your foremost priorities?

Kenny: I think we were questioning everything: how to build houses and how to conduct ourselves on work sites. One of the things we didn’t question at first was this whole ‘your kid your problem’ aspect of our culture and the isolation of mothers and yeah, the fact that it’s really hard for moms to go back to work when they have small children. So, it actually took us awhile, and it was a real radical breakthrough for us when we went from saying, “Yeah, your kids can come but they’re still your problem” to we are actually going to pitch this to clients as, “They are going to pay for a childcare person on worksites.”

Have the Mudgirls gained much traction outside of British Columbia? 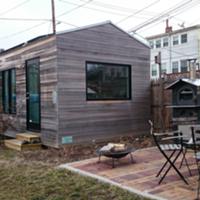 How to Build Two Billion Homes Without Sinking the Planet

Murphy: Or the Ukraine or Greece.

When did you decide to write the book?

Kenny: The book isn’t just about building, it’s about the experience of trying to keep the movement alive and keep the group alive in the world when there are so many discouraging forces in the world. How do you prevent burnout, how do you communicate, how do you treat each other well and keep it fun?

Murphy: Your line in the book, Clare: “You don’t look after what you don’t love.” If you’re not taking care of your neighbourhood or you’re not getting to know the world around you, you’re not going to take care of yourself properly. And that’s what we’re hopefully trying to establish in people.

Where do you see the Mudgirls in five or 10 years?

Murphy: Hopefully, we’re still doing the same thing. I have a feeling there’s enough members and there’s enough continuity, and our guiding principles are strong and our mission statement is stable. I think we’ll still be building. We’ll be having a great time.