Let’s talk about sex. And by that I mean, sex on film.

It was a big year for love in cinematic form. It popped up rose-coloured, and full of Italian sunshine and boogey dancing in Call Me by Your Name. It provided a painful coming of age moment in Lady Bird. It threaded its way through Film Stars Don’t Die in Liverpool and BPM, and was a distinctly uneasy making element in I Love You, Daddy and Wonder Wheel. Other than violence, there is no more compelling plot device than folks getting it on.

But what has all this sex on camera revealed, especially when the subject is so incredibly, torturously fraught at the moment. When the battle of the sexes would seem to drive a wedge between all humans, it is important to remember that sex can also bring us together, all of us in a big sweaty pile. Not just in that way, but also as a revolutionary force, upending the barricades, tearing down the walls, and dissolving difference, all in a rush of liquidity.

Nowhere is this intermingling more wondrous than Guillermo del Toro’s new film The Shape of Water, a monster movie with a heart of wet green gold.

For every girl and boy who felt vaguely disappointed when the beast turned into a button-nosed Ken doll at the end of Beauty and The Beast, I have great news! This beast stays true to form. Not only that, but he also has a penis. Hooray, says everyone!

But before we get to that particular unveiling, the scene must be set.

Here is where you might feel your eyes fly open. Yes, this is a fairy tale, albeit a distinctly adult one, but it adheres to the fundaments of the form, with precision and care. The archetypal bones are laid down, and the story lovingly retraces them, like it was polishing ancient wood.

Like any good fairy tale heroine, Elisa is locked in a prison of sadness and servitude. Rendered mute at birth by a mysterious accident, she floats through her days, scrubbing floors and cleaning toilets. A slow leak of solitude pulls down the corners of her mouth and adds pools of sorrow beneath her eyes. Life drags on in a dreary succession of calendar pages. Until one day, a new visitor makes an appearance at the lab. He is a byzantine beauty, garnished with nictitating membranes, delicate frilled spines, and sleek green scales, as well as a hunger for hardboiled eggs. And, also, surprise surprise, the physical act of love. A resident of the Amazon River, the creature has been brought to Baltimore by a particularly nasty species of the American male. A one-man military industrial complex, named Colonel Richard Strickland (Michael Shannon).

Strickland is instantly recognizable as a dyed-in-the-wool fascist dick. A similar character strutted and sneered through Pan’s Labyrinth, a film that bears the most direct relationship to The Shape of Water. Michael Shannon brings his customary cockeyed intensity to the proceedings: from peeing with no hands to piston-like sex, he is a walking, talking penis, intent on dominance of every variety.

But not every woman loves a fascist, and ranged against this almighty whitey with his ’50s crew cut and immense pool of underground anger is a rainbow coalition of folk. Gay men, women of colour, people of differing abilities and, of course, a gill monster.

As Elisa and her aquatic lover grow closer, learning to communicate and sharing food, music and dance, plans are shaping up to kill and dissect the creature in order to understand how he actually functions. (His ability to breath both in and out of water is cited as relevant to the space race.) Turns out the Russians are also interested in the ‘asset,’ as he is so gently termed, and have embedded a mole/scientist to press their interests.

The narrative mashes together different genre tropes (Cold War spies! Fred Astaire dance routines! And monster movie scares!) with something close to glee. Don’t worry too much about making hard and fast connections between all of these disparate things. There is so much loopy joy at work that it is best to let the stuff wash over you in a flood of glorious romantic oddity.

In order to save the creature, Elisa enlists the help of her neighbour Giles (Richard Jenkins), a closeted gay illustrator, and her friend Zelda (Octavia Spencer), who functions as a one-woman Greek chorus, commenting drily on the foolishness of love, while her marriage slowly crumbles and dies. Both are victims of romantic disappointment, and when genuine grand passion enters their world, it seems as exotic and strange as the monster man himself. Love of such magnitude and scale produces its own gravity, and as the people around Elisa begin to fall into orbit, a plan takes shape.

There is much synchronizing of watches, forging of identity badges, and feats of derring-do, but will Elisa and her gang of misfits succeed, or will they succumb to the jackboot on their necks, grinding and breaking under its pressure?

Peep between your fingers for this part, as the action ratchets up, and the stakes become perilously high.

Much has been made of the film as a celebration of intersectionality, of people’s ability to disrupt the rigid divisions of race, sex and class through collective action. The Shape of Water adds the species barrier to this group of segregating factors, and in so doing folds in an even larger idea, namely good old-fashioned biophilia.

Biologist E.O. Wilson may have coined the term, but fairy tales have made use of the motif of magical animals since the days of pre-literate society.

In this aspect, del Toro’s film is playing with a number of ancient ideas — the beastly bridegroom, the power of transformation and the grand old notion of happily ever after. Humans need myths, not only as a means of constructing and contending with reality, but also as a way towards creating a bigger picture. Watching The Shape of Water, I was overcome by a desire to simply let it do its thing. There is magic at work in this movie, a quality that resists easy dissection and analysis.

The film is also a love poem to cinema. Movies are featured throughout, flickering in black and white beauty from old TV sets, or beaming like a holy visitation from the projector booth in a decrepit old theatre. No scene makes this cinema love quite as apparent as that of Elisa discovering her monster beau in a movie theatre, bathed in spectral light, and seemingly bedazzled by the silver screen and the images its contains. 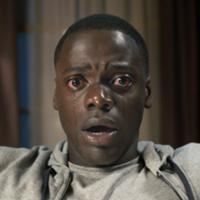 Movies Matter More Than Ever in Confusing Times

Back to the bigger, weirder ideas that the film is messing about with, not only in its binary constructions and conflicts — hard versus soft, wet versus dry, or the military industrial complex against squishy old biophilia. And, most terribly, steel against flesh.

But also, and most importantly, its celebration of the heroic aspects of human nature that maintains there is more than economics and materialism, that courage is its own reward, that love is enough to resist tyranny. Life in all its pervasive, persuasive ways can break through brick walls, and send up green shoots towards the sky. In this, the film is a distinctly hopeful creature, infused with a force that feels somehow larger than what is on screen. It is a reminder that despite our lust for omniscient technology, our monkey-mad power mongering and our insistence that human existence trumps all; there is something older, bigger, and more meaningful at work, shaping the story.

In this aspect, E.O Wilson has the final word:

“I believe that in the process of locating new avenues of creative thought, we will also arrive at an existential conservatism. It is worth asking repeatedly: Where are our deepest roots? We are, it seems, Old World, catarrhine primates, brilliant emergent animals, defined genetically by our unique origins, blessed by our newfound biological genius, and secure in our homeland if we wish to make it so. What does it all mean? This is what it all means: To the extent that we depend on prosthetic devices to keep ourselves and the biosphere alive, we will render everything fragile. To the extent that we banish the rest of life, we will impoverish our own species for all time. And if we should surrender our genetic nature to machine-aided ratiocination, and our ethics and art and our very meaning to a habit of careless discursion in the name of progress, imagining ourselves godlike and absolved from our ancient heritage, we will become nothing.”

Amen, brother, and bring on the underwater sex monsters.

Dear readers and commenters: You may notice that comments are not enabled for this story. In what has become a Tyee holiday tradition, we're closing the commenting system for the holidays. Thanks for all the insightful, informative comments in 2017. We look forward to more of the same in 2018.