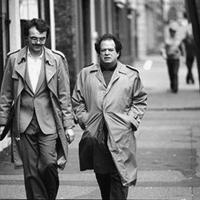 As if that list wasn't exhaustive enough, there was one more. Author. Thirty-years ago, Green burst into print with Against the Tide, a comprehensive recounting of the storied Canadian Seaman's Union (CSU).

Told in large measure through the words of those who fought the good fight all those years ago, the book brings to life an extraordinary saga of radicalism, commitment to the cause by ordinary seamen, and outright thuggery, encouraged by the federal government, by those who were determined to crush this one-of-a-kind union. Yet today, with barely any CSU veterans left to tell the tale, the story is a largely-forgotten chapter of Canadian history.

But on Friday, Feb. 26, the Canadian Seamen's Union will be brought to life once again, through Jim Green's book. The occasion is this year's annual Jim Green memorial. Instead of a guest speaker or high-powered panel discussion, the event will feature a staged dramatization of Against the Tide, adapted by Charles Demers, the increasingly busy lefty comedian, who, at 35, already rivals Green in wearing a multiplicity of hats, including the voice of Walter the Slug in a coming animation series.

"Jim was immersed in arts and culture," explained event organizer Am Johal. "What better way to talk about an important historical story, that also speaks to us in the present and future, than to make it come alive as a staged reading."

The CSU arose at the height of the Depression, with an unwavering goal to better the grim, working lives of thousands of crewmen putting in long hours for meagre pay on scores of freighters traversing Ontario's Great Lakes. By the outbreak of World War Two, 90 per cent of the Great Lakes' 7,000 seamen had signed up. With strong, deep-sea locals in the Maritimes and here in Vancouver, the union became a national force, stretching across the country.

Almost all CSU members then went on to serve courageously with the Canadian Navy's wartime merchant marine. The large fleet, fourth largest in the world, was critical to winning the Battle of the Atlantic. Hardened by war, surviving seamen returned to their peacetime jobs in no mood to roll over to the shipping companies. Under tough, resolute leadership, with solid membership support, the union won a month-long strike in 1946 that brought breakthrough improvements in wages and working conditions, including the industry's first eight-hour day.

Shipowners plotted revenge. Three years later, they forced the union into another strike with exorbitant demands for concessions, while whipping up a Cold War frenzy over the union's Communist leadership. The federal Liberal government connived with the owners to bring in the mob-dominated Seafarers' International Union from the United States to smash the strike. Violence flared on the picket line. Heads were busted, pickets shot, scabs run through the lines with the help of RCMP billy clubs and hired goons.

What: Staged reading of excerpts from Against the Tide by Jim Green, adapted by Charles Demers. Directed by Amiel Gladstone, featuring Andrew Wheeler, Carmen Aguirre and Kevin MacDonald.

Who: Co-presented by SFU's Vancity Office of Community Engagement, SFU Institute for the Humanities, SFU History and BC Labour Heritage Centre.

The union did not surrender easily. CSU deep-sea crews backed the struggle by tying up at a dozen ports around the world, the first and only such international strike in Canadian history. And pitched battles on the picket line did not always go the owners' way. But SIU brutality, underhanded company tactics, and the shameful role of the government and police proved too much. The strike was lost. Hiring halls were taken over by the SIU, run by convicted criminal and crime boss Hal Banks. It was Canada's own version of On the Waterfront, without the Hollywood ending.

Still, CSU members never lost their fighting spirit. For many it was the most meaningful time of their lives. Jim Green got to know some of them on the Vancouver docks, where he worked in the 1970s. He drank with them, listened to their stories and loved them. When CSU veterans wanted someone to write their history, they turned to Jim Green.

In his adaption, Demers said he was careful to make Green part of the narrative. "One of the great charms of the book is Jim's deep, deep affection for these guys, the way they talked, the way they lived," Demers said in an interview, shortly before he headed off to the three-person cast's first rehearsal. "He's writing this high-minded, serious history, but he's also in love with the guys he's talking to."

Demers had vaguely heard of the CSU before taking on the project, but he had no idea of its ideals and progressivism. "I'm young, but I have an old man's interest in the radical left's history." While most union leaders were members of the Communist Party, the fierce loyalty of rank-and-file seamen towards the CSU, had nothing to do with the Kremlin. They supported the union because of its militancy and willingness to take on the powerful shipping companies. "These were not the bakers and the candlestick makers. These were tough, tattooed guys before anyone had tattoos," Demers said. "A lot were the sort of people respectable middle-class folk would cross the street to avoid, but they absolutely shook the way business is done in this country and put the fear of God into some of the most powerful men in the country."

Yet adapting their story into a mere nostalgic look-back, would do them a disservice, said Demers. "It's fun for a kind of potted-plant afternoon, but I don't think it's all that politically useful to just take some trip down memory lane with these now harmless, salty old guys."

He pointed to the unprecedented internationalization of the CSU's legendary 1949 strike. "It's a vision that was ultimately defeated, but it's an important part of our shared heritage as we move into this increasingly globalized world of the 21st century," Demers said. "These guys were globalizers of the international working class, before anyone was interested in that sort of thing."

And much of what the CSU went through in the 1940s echoes struggles of the working class today, he added. "So, while elements of this story feel like they're from a museum display, huge elements seem straight from the news headlines or ripped right off Twitter."

Demers has assembled a trio of experienced, local actors for Against the Tide, Carmen Aguirre, Ken MacDonald and Andrew Wheeler. It's a ticketed event at the Djavad Mowafaghian Cinema, Goldcorp Centre for the Arts, 149 W. Hastings St., starting at 7 p.m.

Meanwhile, Jim Green's book has become a sought-after rarity. A quick Google search found booksellers offering mint copies for as much as a thousand dollars -- an irony the rough-tough Green, who wrote the book for a modest stipend, would certainly have relished.