So, here we are again. Last year the Academy Awards was a gallery of glossy whiteness and folk got a little red in the face. 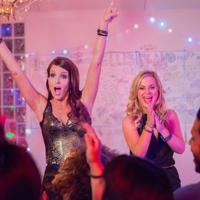 Cheering Women in Film, Because It's 2015

The previous year's Oscar nominations were the whitest on record, except of course for this year's, which are even a whiter shade of pale. While the editorials pour forth about the appalling lack of diversity, gender parity was also pretty pathetic this year. There were no women nominated in any major Oscar categories, with the singular exception of director Liz Garbus in the documentary roundup.

While there were snubs a'plenty for films like Carol, which failed to get a Best Picture nomination, even more egregious was the lack of any awards for films that were actually trying something new. The situation with Creed was particularly painful, but many of the year's most exciting and innovative films were entirely absent. Tangerine, for example, didn't even register.

Even conventional fare such as Straight Outta Compton was shut out, despite strong box office and good reviews for the raging performance of Jason Mitchell as Eazy-E. Instead, we got boring old Bridge of Spies -- a film so stodgy that it could easily have been made in the 1950s. In the rest of the Best Picture nominations -- The Big Short, The Revenant, Brooklyn, Room, Spotlight, The Martian, Mad Max: Fury Road -- there were a few moments of interest, but no genuine surprises.

Sometimes, it starts to feel like the same few films simply go round and round. Not only is this shortsighted, narrow and exclusionary, but it's also boring as hell.

The definition of privilege

If the lack of diversity in the Oscars fails to convince that white men are still holding onto power like grim death, let's look at other film categories for further proof that Old Whitey is still here and going strong. Whether it was the disappearing female film critics or missing women filmmakers on top-50 lists, it all added up to a decidedly lopsided picture.

In a recent Timeout poll of the 50 best documentaries of all time, there were exactly three films made by women listed. Despite the perception that documentary has traditionally been more inclusive for women, the stats were on the grim side. The number of filmmakers of colour in documentary was so depressing no one even bothered to bring it up.

Leaving aside the essential ridiculousness of lists and awards -- which can sometimes feel like the equivalent of saying, "This elephant is better than this avocado" -- awards still have impact and power. If your film wins an Oscar, you may be likelier to get more money to make your next film. This is the point that Victoria Cook made in her astute assessment of the documentary industry.

Then there's the issue of what stories get told, who tells them and what are they about. If the greater preponderance of filmmakers is male and white, they are more likely to make films about the experience of white men. Not always, but by and large. This is the essential definition of privilege -- to think that your story should stand in for everyone's story. The most depressing aspect of this is that it doesn't budge very quickly. Everyone knows this, no one apparently likes it very much, and still it continues.

The films that bagged the lion's share of awards this year were almost always men's stories. Witness The Big Short, Bridge of Spies, and most especially The Revenant.

Much ink has been spilled about The Revenant lately, not only about the macho torture fest that was the production from beginning to end, but also about the scale of ambition on evidence. Moving the production from one corner of the globe to another, filming only in natural light, etc. Blah blah blah, we get it already. It was hell, even though no one actually died.

A friend of mine told me a story about a friend of his who was working on the film and refused to leave, even when crewmembers were fleeing en masse out of some masochistic impulse to endure at all costs. The chest-beating, bear-baiting, man-on-man hubris around this film has crowded out more reasonable discourse. If you would like to sit through more than two hours of men bonking each other and bellowing, be my guest. At the end, what you get is the sense you have been used to further the ambition and ego of both the film's director and its star. You have been screwed my friend, used and abused, with little to show for it but a sore bum and an empty feeling inside. (Now you know how it feels to be a woman.)

I think a recent Onion story got it right with the headline, "Leonardo DiCaprio Hopes He Screamed and Cried Good Enough In 'The Revenant' To Win Oscar." But the thing that's most troubling to me is the distinct lack of soul at the heart of this thing. For all the oodles of money spent, the hair-rending hysterics of the actors, and the bravura camera work that never stops screaming "Look at me!" the film has no heart. A movie like Tangerine, shot on an iPhone with unknown actors and made for $100,000, has 10 times the spirit, the humanity, and the pathos of The Revenant, which boasted a budget of $135 million.

I know money doesn't buy happiness, but it probably buys awards if the recent Golden Globes are any indication. Folks are still scratching their heads over the fact that director Ridley Scott picked up the Best Comedy Award. As one pundit recently put it: "The Martian won the Golden Globe for Best Comedy because everything is a lie."

After a while, it starts to feel a little bleak and weirdly repetitive. All this endless discussion, editorials, and handwringing only go so far. We end up having the same conversations over and over again. This isn't helpful, and worse it's weirdly enervating. How many columns have been published in the last few days about the white Oscars? Whether this level of public shaming does any good, I don't know. It might be more useful to leave the Academy to its own increasing irrelevance and go off to do other things. Audiences have apparently decided to do this anyway, as the numbers of people who actually watch the show have continued to dwindle in recent years.

What to do? Start here

If you want to take a more proactive approach, you can instill systemic, government-mandated change like the Swedes. The ratio of 50:50 has apparently already been achieved in Sweden and has inspired other countries to do the same. Perhaps the National Film Board could revive Studio D here in little ol' Canada.

Festivals can lead the way. The commitment of Sundance to gender parity is a laudable start. If the Cannes Film Festival makes itself look ridiculous by insisting that women wear heels, other festivals are taking a more egalitarian approach. Festivals such as IDFA in Amsterdam have featured programs devoted to women filmmakers.

Even if you don't run a major film festival or head up the Swedish Film Institute, you can make change on a much smaller and more personal scale. If you want to see films that reflect the world as you actually experience and understand it, you could go out and make your own. I would encourage those of you with the will and determination to do just that. You can also write and talk about women-directed films that deserve wider recognition. All hail Laurie Anderson! You can make hilarious podcasts, publish zines, or start a punk band. I think about this a lot and implicate myself in being less active than I should be. The opportunity to speak up, to be a good ally for people of colour is the only way to make things better. It's just a long slog sometimes. But we do have power, whether it's with our money or our voices. For every august film journal that features a single female writer -- maybe two, if you're really lucky -- cancel your subscription until they deem fit to change their ways.

But before we start singing Parachute Club anthems, there are certain things that need to fundamentally shift, beginning with the gatekeepers: the people with money and power who get films made and distributed. It helps if they are fair and equitable in their assessments and allocations.

Boycotting the goddamn Oscars might just be a good start. We don't need no whitewash anymore.