My sister has this theory about people who came of age in the 1980s. Her theory is that they never really grew up, that they stayed Breakfast Club kids forever. After watching Sisters, I think she may have a point. 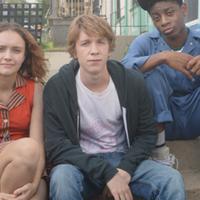 Um, Now Can We Have a Girl's Coming of Age Film?

Sisters is the new Amy Poehler and Tina Fey comedy that features the pair as middle-age siblings. The Ellis sisters are Maura and Kate. Maura, the good and responsible sister (Poehler) is only one dog adoption away from permanent spinsterhood. Kate, the naughty dark-headed skank (Fey) with a penchant for drink, drugs and muscle boys, is teetering on total financial and emotional meltdown.

It's easy to see where we are headed from the very outset. Skanky must learn responsibility and uptighty must learn to let go and relax. If you don't expect too much, that is probably best. After their parents sell their childhood home, the girls return to pack up their bedrooms and say goodbye. But before they leave, they decide to throw one last massive house party (termed an Ellis Island affair). You can probably imagine what happens next. Pity the drywall...

Poehler and Fey are phoning it in, but there are a few giggly bits, mostly from the easy interplay between the sisters. The supporting cast does its part to keep things moving along. Maya Rudolph almost never disappoints and here she makes off with the best lines, like a veteran thief. When the action ramps up and the house party becomes home wrecker, it is pleasant enough to simply enjoy the carnage. There is random mud wrestling, epic disaster and some sister fisticuffs. All's well that ends sort of okay, I guess. Sisters is a film that is best seen on a plane. That's about all there is to say about it.

But I think that women should be able to coast a bit, as we had a pretty good year. There were a fair number of films that attracted women to the theatres, whether it was Amy Schumer's raunch-o-rama Trainwreck or Carol's Cate Blanchett and Rooney Mara wearing hats and getting swoony over each other. Mad Max could easily have been redubbed Furioso's Revenge. Even Star Wars passed the Bechdel Test. But in recent weeks, there has been a spate of films that were full on boy's clubs -- The Big Short, The Hateful Eight, and even Spotlight was mostly a bro show.

On men with hatchets

If there is one film to avoid, I would suggest you female lady types steer a wide birth around The Revenant. According to a few Internet twerps, if you have a pair of ovaries The Revenant may prove too much for you. I would suggest that you stay away for the opposite reason: namely that the film will both bore and annoy you into alternating states of somnolence and rage. Also, it is simply ridiculous.

This is a movie that must be endured, in the same way that an interminable lecture from a particularly boring mansplainer about the Swedish banking system must be stood. Don't be warned off by the notion that the film will prove too much for delicate female sensibilities; beware the bloody thing because it is one long fattened slog of directorial and thespian ego. Not to mention endless hubristic bull-crap: men hacking each other with hatchets, hairy accents, hairy beards, hairy bear skins and scalped heads. Anyone with a dram of good sense would take one look at this overblown torturous frog march of pomposity and skip away. The feeling of escape is akin to getting out of a dentist appointment, meaning pure bliss.

If you've had it with the boys and their tiresome ways, and you would like to see a fine film about female emancipation, then I would suggest you return to Ex Machina. It is a sleek beast, cool to the touch, humming along like a good piece of Danish engineering. The film came out last summer, but it has popped up on critics' list for the performance of Alicia Vikander as a robot with a heart of glass and steel. In Vikander's other films this year (The Danish Girl and The Man from U.N.C.L.E.) she had to share the billing with dudes of one variety or another. Here, she is the main show in a bravura piece of manipulation and cunning that puts all of The Revenant's dumb bluster to shame.

Sometimes a whisper is louder than a shout.