Jeff Chiba Stearns is about to be a father in November, and there's an important conversation he wants to have with his daughter that he never had with his own family growing up. 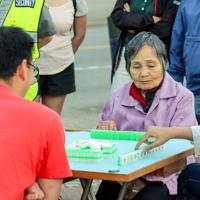 'Hot and Noisy': The Communal Power of Mahjong

It's not about anything like table manners or the birds and the bees: it's a conversation on race and ethnicity.

Stearns grew up in Kelowna in the 1980s, where most people were white. His mother was Japanese and his father had British, Scottish, Russian and German roots (one grandmother makes classic cabbage rolls), but "being mixed meant you were a full minority."

Like many others with a multiethnic background, Stearns had confusion navigating his identity and faced being called things like "half-breed."

"Not everyone goes through identity crises in their lives, but everyone has a story," said Stearns. "Either they've rejected the fact they're part of a minority group, or they've embraced that, or they've just wanted to be human [and say] I just want to blend in and fit in."

There are a lot of different names for those with a colourful heritage. Sometimes it's mixed-race or multiethnic, but it's really up to the individual.

For Stearns, he likes hapa. He saw the word for the first time in a Japanese-Canadian journal his grandfather subscribed to and something inside him clicked.

Though the Hawaiian term had connotations with being "part" something -- which some multiethnic people reject along with "half" as it implies there's something missing -- hapa has become a popular term as it helps define a whole identity, despite being mixed. You're 100 per cent hapa, rather than a fraction of something.

Stearns is a big part of the hapa dialogue today. An animator and documentary filmmaker, he's made films on his experiences growing up, why Japanese have the highest rate of intermarriage and the difficulty of finding bone marrow donors for multiethnic individuals.

Stearns also helped found Hapa-palooza, a Vancouver festival that celebrates mixed heritage and sparks conversation. Now in its fifth year, the event series is something he wished he had when he was younger. He's not alone in wanting his daughter and the next generation to have the same.

"I think a thing a lot of mixed people like about their mixedness is that they can say I am a part of many cultures and I can embrace those cultures," said Stearns. "That really to me is what Canada is becoming."

B.C.is the province with the highest percentage of multiethnic people at 2.5 per cent, with Ontario the second-highest at 2.2 per cent.

Chang's own experience also defies categories. She grew up everywhere from Connecticut to Los Angeles, Beijing to Taiwan, and has Taiwanese, Slovakian, German and French Canadian roots.

"I always seemed to be different and it's not always friendly or welcoming," Chang said on moving around.

While Chang believes discovering your identity is a "fluid" process, there are some landmark or moments of realization for individuals puzzling over their ethnicity.

For Chang, one was meeting her future husband, who is also multiethnic and was very vocal about his own identity. It caused Chang explore whether she had really unpacked all the baggage from her experiences.

For Vancouverite Chelene Knight, the realization came through writing.

Knight felt different even in her own family and hid her background when she was younger. Her mother is African-American and her father is East Indian from Uganda.

Knight says she was a shy, quiet child. Writing to express her feelings helped greatly, and her book of poems entitled Braided Skin was published this year. "I have to get it out," she said. "No one said, 'Hey, I want you to be comfortable in your own skin, let's talk about this.'"

Knight identifies with being black and is frustrated when people question whether she's sure she's black, or say that she looks "exotic."

"We need to teach our young girls to love their bodies, their hair, their curves, their skin and everything else that belongs to them," said Knight, now a mother. "Don't ever ask someone, 'What are you?'... I have been asked this so many times and it always makes me feel like I am not human."

There is a growing conversation on ethnic mix from television comedy that plays off cultural clashes like Fresh Off the Boat and Black-ish, to U.S. President Barack Obama identifying as black on the 2010 census rather than black and white despite his mixed parentage.

Having that dialogue is important to many, like Anna Ling Kaye, who is the editor of Ricepaper magazine and also helped start the Hapa-palooza celebration of mix.

Kaye, of Taiwanese-Jewish heritage, grew up in a number of Asian countries surrounded by multiethnic peers; her father was a foreign correspondent and many of his colleagues' children were mixed. She never felt different until she went to America for university.

"In my undergrad I was going to a Chinese club and it didn't fit for me," said Kaye, "and going to Jewish clubs and realizing there was no way either."

When she did writing in Vancouver, she realized that being mixed was something important to explore in arts and culture. Starting Hapa-palooza was a chance to celebrate an identity she feels like she belongs to with her own children.

But aside from celebration, having a conversation on race and ethnicity with the next generation is also important to Stearns, Chang, Knight and Kaye, whose children are all part of the rising demographic. Mixed unions are also increasing, comprising 4.6 per cent of all married and common-law couples in Canada, according to the 2011 National Household Survey.

Chang, who wrote a book on parenting called Raising Mixed Race, believes these conversations can start young and that we should give kids more credit. Her son, the child of two multiethnic parents, often asks about his ethnicity. At age five and three-quarters (he insists on the three-quarters),he's already told a playmate in polite way not to make fun of him for race.

"I didn't have conversations like this with my folks so I'm just flying blind and he's responded brilliantly," said Chang.

It's a different world from when Chang grew up, who says her life wasn't defined by the question "Who am I?" but rather "What are you?"

Hapa filmmaker Stearns has an answer to the latter question: "If I had a dollar for everyone who came up to me and said I'm mixed... We're all mixed. At some point in somebody's lineage, in their heritage, in their ancestry, somebody got funky with somebody else. And that's exactly what we're celebrating. We are all of one human race."

Hapa-palooza runs from September 16 to 20 in Vancouver.