Summer is magic. When you're a kid, you spend a good portion of the year dreaming of, yearning for, and impatiently awaiting the arrival of the long bright days and warm nights of summer. Summer for me was when the most interesting things happened -- adventures, crushes, swimming, cherries and nighttime visitations with ghosts -- all of the best things in life, really. 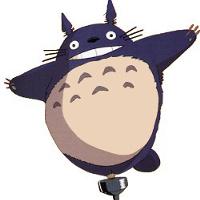 Summers of old may come rushing back when you watch the newest Studio Ghibli film, When Marnie Was There.

Director Hiromasa Yonebayashi's new film may well be the final chapter from the legendary Studio Ghibli's magnificent run. (The studio is supposedly going on hiatus after this film.) Marnie may be a quiet end to the pantheon of animated masterpieces that have streamed out of Hayao Miyazaki's studio, but the film is satisfying in its own way. The echo of earlier (greater) work that is embedded throughout the DNA of Marnie is almost enough to carry it along. Watching the film, I couldn't help but want to return once more to My Neighbour Totoro, Spirited Away, and especially Kiki's Delivery Service, the Ghibli film that bears the most immediate resemblance to Marnie. Each of these earlier works is similarly filled with the heady golden weight of summer. Trees, grass, flowers that are swollen and thick with pollen, big puffy white clouds against a startling blue sky -- all of the visual motifs are here. It is a veritable symphony of summer beauty, so resplendent in its aching loveliness, there's no option but to resign yourself to it, and let it ravish you heart and soul.

But before we get to summer's warm embrace, the basic rules of the story must be established.

When Marnie Was There begins in the noisy smelly city, where a young girl named Anna describes her sense of realty. ''In this world, there is an invisible magic circle. There is inside and outside. These people are inside. And I'm outside,'' she says. An awkward, painfully shy kid, Anna is prone to asthma attacks and gloom in equal measure. Tragedy has marked her since childhood, and its scars are obvious in her approach to the world. Cranky, sour and closed-off, she is not the most obvious nor likeable of heroines. Her foster mother decides that a summer at the seaside (in Hokkaido) might help. So, off she goes, suitcase in hand and weird looking hat on her head, to spend the summer with distant relatives.

The bones of many classic children's stories narrative (The Secret Garden, Heidi, etc.) begin thusly, and so it does here as well. Introduced to the town folk by her bumptious guardians, Anna sets about discovering the lay of the land. Immediately, an abandoned mansion in the marshlands catches her eye. Glimmering in the distance, brimming with mystery, it draws young Anna like a magnet and she wades through the tidal flats to make her way there. The grand old pile is empty and forlorn, with peeling paint and broken windows. Anna's first experience with the place finds her stranded by the tide until she is rescued by a silent fisherman named Toichi who rows her back home.

That same night, Anna dreams of a young girl in the marsh house, having her hair brushed by an elderly woman. According the local lore, the house once belonged to some foreigners who used it as their summer home, but the place had been abandoned for years. Or so it would seem. Anna's last look at the house, under the moon and sky, catches it fully restored and made whole, filled with music and the festive sound of a summer party. The place beckons like a siren, and Anna finds herself drawn back to the marsh house in both waking and dreaming life.

Meanwhile, back in the ordinary world, Anna's helpful aunty and uncle are doing their best to coax her out of her shell. A neighbour's teenage daughter is commandeered to take Anna out on the night of the Tanabata Festival, but things go horribly wrong. Anna insults her hosts and runs off in a supreme state of preteen mortification. An attempt to row out to marsh house almost ends in disaster when Anna's oars get stuck and she is sucked out to sea by the tide. Rescue occurs in the strangest of places, with the mysterious young girl from her dreams throwing her a lifeline.

Here, we are finally, formally introduced to the film's titular character, one Marnie -- blonde, beautiful and prone to popping in and out of Anna's life with the most alarming lack of notice. Marnie is spontaneous, charismatic and a huge amount of fun; she pulls the morose Anna out of her own head and into a world brimming with magic and excitement. The pair embarks upon a series of adventures, including picnics and midnight rows out on the ocean underneath a pellucid moon. The romance of it is immediate and palpable. Anna, who has never had a real friend, falls under Marnie's spell, quite literally. But as the summer progresses, Anna gradually begins to lose track of reality. She and her new friend merge and mingle in the strangest ways. As she says, ''It's almost like we've traded places.''

In reading about Joan Robinson's original children's story, the uncanny aspect seems to be one of the book’s most enduring qualities. It appears to be one of those novels that enters your heart and mind and takes up residence on a permanent basis, helped in large part by the darkness that is just beneath the surface. As Marnie explains, her parents are often away, and she is being bullied by the household staff that locks her in her room, tease her with scary stories and mean bouts of hair brushing. In a few places, the film occasionally feels like a junior version of The Shining, complete with creepy adults smoking cigarettes and drinking wine.

The film ups the ante with an additional weird subtext around burgeoning sexuality and gender confusion. Tomboyish Anna professes her love to Marnie with an ardency that is over and above ordinary friendship. (This gets even weirder during the film's final dramatic reveal.) Other unresolved issues around mental health, racism and xenophobia also pop up. Kids might not pick up on the strange vibes going on, but adults may occasionally feel a tad uncomfortable with some of the more outré elements. But no matter, that is no reason not to see the film. The sentimental and occasionally hokey plot pales alongside the staggering beauty of the film.

Like all the rest of the Studio Ghibli films, the truth is in the details, whether it's the ordinary stuff of cooking and eating dinner, doing the dishes, or the more exotic moments of ghosts, soot sprites and the vast mystery of the night sky. In one particularly gorgeous sequence, Anna is happily eating breakfast before setting off for the day's adventures. She slices a fried egg with the edge of a chopstick, and the camera lingers long enough to see the deep orange yolk ooze out before Anna folds the entire thing into her mouth and chews blissfully away. It is such a brief and beautifully realized moment, that the mind lingers, wanting more of these physical, tangible details. The film, to its credit, supplies these in abundance, whether it is quiet afternoon when Anna falls asleep on her bed with sketchbook in hand, or an extended sequence devoted to the pleasures of picking and slicing tomatoes.

The time and care that is lavished on these seemingly smaller details is what distinguishes Studio Ghibli films. In this sense they recall the best in children's literature, whether it is the wonder of the natural world (The Secret Garden) or an obsession with delicious food (Little House on the Prairie). To this day, I can recall details of cold watermelon and pound cake from Laura Ingalls Wilder's series of books.

But there is something more in the very best of the Studio Ghibli films, some kind of wild magic that gets inside of you, into the marrow of your being and takes you back to a time and place when the beauty of the world and your place within it was a straightforward equation. Your job as a child was to experience the sweet syrupy flow of summer days and nights, to go exploring and find grottos filled with deep green moss, to witness the cinema of pond life, filled with the epic drama of water striders, tadpoles, frogs, minnows and giant water bugs. The world supplied all the action, adventure, romance and mystery you could handle. And beyond even that, there was something else, some ineffable thing, an unseen world that beckoned you into the woods, the lake and the fields. It is this thing that Hayao Miyazaki has somehow managed to capture in his films. How he did it, I am not sure, but it is there, as certain as the blue sky and long sweet slide of a summer evening.