At a recent film preview and book launch in Vancouver, a series of scholars, writers, and media personalities spoke, with intense feeling, about Fred Herzog's street photographs. Each chose an image, taken by the Vancouver-based artist in the 1950s or '60s, and addressed how its subject matter and compositional elements coalesce in a way that compelled them. 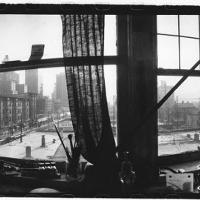 A Bohemian Vancouver, Lost and Found

They said things like, "This is me, as a kid, sitting outside a corner store, drinking pop out of a green bottle." Or, "Here's my great aunt, standing on a sidewalk, wearing her Sunday-best coat and hat and holding a copy of Awake!" Or, "That couple, walking arm and arm in the rain, they're my parents, recently arrived from Italy."

The audience would marvel at the supposed serendipity, and then the speaker would reveal that she or he was, well, waxing metaphoric. Not really me, but could have been me. Not my aunt, but so much like her. Okay, no, not actually my parents, but profoundly reminds me of them -- their hair, their clothes, the way they link arms beneath their shared umbrella. Given certain conditions of colour, light, and place, it seems, other people's histories become our own.

Vancouver, through an émigré's lens

Fred Herzog, who arrived in Canada from Germany in 1952 at the age of 22, has belatedly emerged as the leading photographic chronicler of his age and adopted home. He has also become, since his breakthrough retrospective exhibition at the Vancouver Art Gallery in 2007, immensely popular.

Herzog brought to his major subject, the streets of Vancouver, an émigré's sense of wonder. He was captivated by the raw vibrancy of what he saw: the throbbing neon, shiny cars and flashy billboards; the barber shops, coffee shops and cocktail lounges; the thronging Saturday sidewalks of Hastings Street; the movie theatres of Granville Street, and the food markets of Chinatown. Equally, his eye was drawn to the gritty and the shabby, the downside of the commercial dream: the squatters' shacks beside the railway tracks on Burrard Inlet, the wrecked cars abandoned in a vacant lot at Georgia and Dunlevy, the gaunt old men, ragged kids, and peeling paint of Vancouver's Eastside.

Fred Herzog Photographs, the second major book on this artist issued by Douglas & McIntyre, comprehends the range of Herzog's vision. (The first, Fred Herzog Vancouver Photographs by Grant Arnold and Michael Turner, co-published with the VAG in 2007 to accompany the retrospective, is reportedly out of print, and a pristine copy is now advertised on Amazon.ca for $502.43.) This new book reproduces a number of images from the first one, but also presents us with a plethora of wonderful, previously unpublished works, most shot in Vancouver but with inclusions, too, from Herzog's wide travels. Street scenes of his own city find formal and thematic echoes in Montreal, Seattle, San Francisco, and Mexico City.

"The people whose living room is the street are far more expressive to me," Herzog tells art critic Sarah Milroy, "and far more uninhibited than the businesspeople in the grey suits who try to express an authority that they may or may not have." Still, people in the street are not the only subject of Herzog's art. He often focuses on eloquent aspects of the built environment: compressed crowds of commercial signs and outdoor advertising, shabby displays in shop windows, junk-filled backyards, deserted rail yards, and low-rent industrial and residential structures.

Of the four essays in the book, Milroy's is the most comprehensive. A beautifully written critical biography, it describes the arc of Herzog's life and career, from his wartime childhood in Stuttgart to his discovery of his true subject in Vancouver, and his long, dedicated years of documenting the city during his off hours while supporting himself and his family as a medical photographer.

Milroy provides many contextualizing references to his manner of working, his use of Kodachrome slide film, and the richness of colour this afforded him, along with the limitations of display it imposed. She also examines Herzog's work with relation to other street photographers of his time, his long-time "underground" status, and the ways his photographs anticipated, by years and even decades, those of Jeff Wall, Ian Wallace, Stan Douglas, and Roy Arden.

Art historian Claudia Gochmann focuses on Herzog's innovative use of colour, again providing the context of his peers, predecessors, and successors. Colour was disdained by most fine art photographers in the 1950s and '60s, wedded as they were to the supposed purity of black and white. At that time, colour was associated with amateur photographers and, worse, advertising. Rather than enhancing the realism of a scene, colour was considered to be distorting, false, kitsch. What Gochmann particularly remarks upon, however, is how committed Herzog was to colour, and how integral it was to his "pictorial approach."

The two celebrity contributors to the book, photo-artist Jeff Wall and novelist Douglas Coupland, have each produced short and somewhat quirky essays. Wall writes that the character of Herzog's 1950s and '60s photographs would be impossible to achieve today, for the obvious reason that many of the buildings they document no longer exist. He declares that Vancouver is now dominated by architecture that is "vulgar, cheap, ugly and even ridiculous," and extols the beauty and "gracious air of appropriateness" of buildings now lost, especially an old clapboard house in Herzog's 1957 image, New Pontiac. Contrarily, Coupland writes about the ways Herzog's photographs reveal how "utterly filthy" Vancouver was five decades ago. "Vancouver was ghastly back then," he declares. "What was society thinking?" 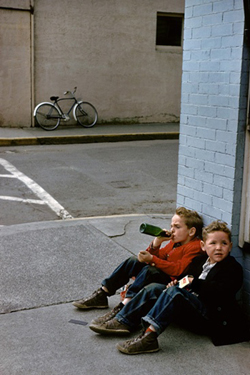 Gracious or ghastly, it is true that Herzog could not shoot street scenes in the same manner now that he did then, although the reasons have less to do with architecture and air pollution than with post-modern proscriptions concerning social trespass and cultural appropriation. Most of the people in Herzog's early photographs are anonymous strangers rather than consenting models. Few of them look directly at the camera, but are shot from behind or the side or with faces averted, making them vulnerable to what we have come to understand as the camera's aggressive gaze.

Many contemporary photographers have accommodated post-modern theory by hiring models and setting up elaborate tableaux that refer to the passing scene, but don't actually document it. In this context, it's possible to wonder if the delight that Herzog's 1950s and '60s photographs inspire in viewers has to do with our nostalgic attachment to the recent past or with a pendulum swing away from staged photography back towards candid street photography. In a subtextual way, this question is raised by Fred Herzog Photographs. Not answered, of course, but raised.