Historian Jack Weatherford has conducted a single-handed rehabilitation of Genghis Khan. In an earlier book, he traced the conqueror's impact on world history: one of the biggest and best-organized free-trade zones the world has ever seen; complete religious tolerance within the Mongol Empire; even the concept of diplomatic immunity comes from Genghis Khan. 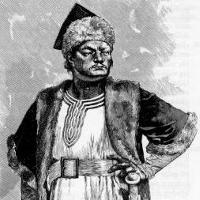 In this new book, Weatherford argues that it was his daughters, not his sons, who made Genghis's empire a success. And when the sons ruined the empire, it was a woman who re-created Mongolia in the late 15th century.

Temujin, the young man who became Genghis Khan, grew up in an unimportant clan in an unimportant people. Other pastoral nations flourished on the 12th-century steppes north of China. They raided and traded with China, and fought to control the Silk Road. The Mongols, meanwhile, were minor players.

Raised by his mother, Temujin learned Mongol spirituality -- a balance between male and female, Mother Earth and Father Sky. More powerful Mongol lords had little respect for the female aspects of the world.

By the time Temujin became Great Khan of the Mongols in 1206, he was in his 40s, with a large family including "four self-indulgent sons who proved good at drinking, mediocre in fighting, and poor at everything else."

But he also had seven or eight daughters, whose names and lives are far less well-known; Weatherford has had to "re-assemble" their stories from various sources. They were clearly remarkable young women.

Marriage as a military assignment

Genghis Khan adopted a policy of strategic marriages. He would marry off a daughter to the king of an allied nation. The king's other wives were dismissed. Then he would assign his new son-in-law to military duty in the Mongol wars, while the daughter took over the rule of the kingdom. Most sons-in-law died in combat.

In this way Genghis Khan built a shield around the Mongol homelands, while expanding beyond them. In his marital instructions to his daughter Alaqai, "He left no doubt that this was a major military assignment. She was not there merely to administer, but to rule -- thereby beginning the expansion of the Mongols from a tribal nation into a global empire."

By the time of Genghis Khan's death, his daughters ruled from the Yellow Sea to the Caspian. Probably never before, or since, have women held so much power over so vast a region.

The sons began whittling away at that power as soon as the old man was dead. Each had received an inheritance of territory, and the easiest way to expand it was to take it from his sisters.

As the daughters aged and died, the sons (and grandsons) seized their kingdoms. A new generation of women gained power: the daughters-in-law of Genghis Khan, who took power while their husbands drank themselves to death.

The Mongol Empire began to fall apart into quarrelling provinces, but rulers always had to be of the Borijin family of Genghis Khan. Often they were mere children, installed by a locally powerful warlord and then killed when they grew old enough to be dangerous.

In 1464, the Great Khan Manduul took a teenage bride named Manduhai. Despite his title, he was effectively a prisoner of local warlords, and Manduhai was a person of no great importance. But by the time Manduhai was 23, the Great Khan was dead, so was his heir apparent, and the last Borijin was a five-year-old boy in uncertain health.

Marriage to the Great Khan's widow was the direct way to the throne (for what it was worth). But Manduhai turned down the likeliest suitor. Then she married five-year-old Batu Mongke and proclaimed him Dayan Khan.

In an anarchic society where family ties were everything, says Weatherford, "They were both totally alone in the world.... They had no parents, siblings, aunts, uncles, nieces, nephews or even cousins.... The orphan and the widow could scarcely be expected to survive alone, but they were not alone. They had each other."

While raising her husband, Manduhai also went to war. She had to unite her people, control strategic grasslands, and break the power of local warlords -- and to keep the Ming dynasty at a distance. She went into battle alongside her soldiers, and steadily won.

Meanwhile, she was giving her boy-husband a good education in how to be an effective ruler. Weatherford notes that "Genghis Khan's shortcomings as a father, in the end, helped bring down his empire and thus undid his lifetime of work. ... She had but this one boy, and she was determined to make him into a leader in war and in peace."

She succeeded remarkably well. It took 30 years of war and diplomacy, but Manduhai united Mongolia without fighting China. (The Ming preferred to build the Great Wall instead.)

She also had eight children by Dayan Khan, including three sets of twins; the succession was assured. His descendants would rule Mongolia until the Soviets arrived in the 1920s.

Weatherford, an anthropologist, clearly explains the complexities of Mongol culture and politics, showing how they affected everything from family life to waging war. That culture respected women; Genghis Khan's personal respect for them enabled him to achieve far more than he could have with men alone.

While Manduhai the Wise has always been a folk hero to the Mongols, few records about her survive. Weatherford had to piece together her story from many sources. A remarkable story it is -- an empire built by a brutal genius who respected his wives and daughters, lost by his wastrel sons, and regained two centuries later by a brave young woman and the old khan's last descendant.