Never give up on the dream, even when you are successfully pursuing another unrelated dream. That is the lesson from comedians who once had music ambitions and then decided to participate from the comedy-related sidelines. 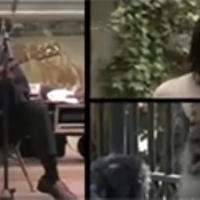 "My act is nothing more than stage banter between nonexistent songs," comedian Kyle Kinane told festival organizers at South by Southwest when he was asked about his attempt at a music career. If some comedians are failed musicians, they are becoming pros at sneaking their way back into the music scene.

Here are some of the ways comedians are covertly shaping the indie music landscape, by imitating, promoting and directing.

1. Open for a band. If you are not in a band, at least as a comedian you can open for one. Music festivals now routinely feature comedians as part of the schedule, and comedians act as warm up performers at concerts. Case in point, Todd Barry -- he is at the Calgary music festival Sled Island this weekend, he opened for the incessantly praised group Yo La Tengo, and he inexplicably played drums for the pop group Mates of State on one occasion.

Barry delivers not so much jokes as deeply sarcastic observations about human failings. So when he receives a letter from a fan bemoaning the "trend of comedians opening for woeful indie rock bands," he reads it onstage with the appropriate amount of contempt.

2. Show up on iTunes. Podcasts give comedians a venue to promote their work to a decidedly devoted audience. The production for podcasts is cheap, they have a wide audience reach, and you can say whatever you want without worrying about broadcast regulations. Scott Aukerman's Comedy Bang Bang recently made the jump from podcast to television show and has spawned an entire series of comedy podcasts under the brand Earwolf. The Earwolf podcast Who Charted? features hosts Howard Kremer and Kulap Vilaysak with comedians talking about the latest music charts and anything else they want to discuss.

3. Direct music videos. Music videos are the ideal sketch length and lend themselves to neatly packaged joke premises, so it was an unexpected move when Tom Sharpling, a master of slowburn, started making them. Sharpling is the host of the New Jersey program The Best Show on WFMU.

The three-hour-long call-in-show has a devoted following -- despite or likely because of the format, in which comedy bits meander out of control. Scharpling regularly hangs up on callers, and the drama of the show builds at unexpected intervals. He's managed to build on the success of the music/comedy/call-in-show in odd turns, inspiring a cult following that has fans reaching out to him on related projects. When Scharpling was asked to direct a music video for The New Pornographers, the band members were too spread out to gather for shooting so a parade of comedians assembled instead. "The Rise and Rise of the New Pornographer" is a tremendously inaccurate biopic that says it all in four minutes.

4. Be a golden god. Short of being a rockstar, you can always develop a rockstar persona. Russell Brand, pop star Katy Perry's ex-husband and former drug addict, has all the trappings of music fame without the guitar. In two films he portrayed Aldous Snow, a rambunctious rocker that cannot pull it together. "This character keeps resurfacing like a corpse abandoned in the Thames," Brand joked in an interview, so there may be another movie yet to come.

Brand is surprisingly invested in the character, releasing an entire soundtrack to the film Get Him to the Greek featuring the songs of Infant Sorrow, Aldous Snow's fictional band.