This time of year, when all the major studios are busily inundating film critics with films for their consideration, is a good time to take stock. Unless by that you mean buying stock in Hollywood. The usual trials and travails of plummeting profits are being written up in newspapers across the land. With audience attendance down, and profits shrinking some $500 million from the year previous, producers and studio moguls are wringing their lily white manicured hands and screaming "WHY!?" to the heavens. 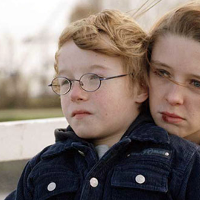 It might have something to do with the fact that films don't make us feel anything anymore. With the holiday movie season in full swing at the moment, all the big releases -- Mission Impossible: Ghost Protocol, The Adventures of Tintin, Sherlock Holmes: The Game of Shadows, The Girl with the Dragon Tattoo et al -- are squatting like bloated toads in the theatres. I have seen a number of these offerings lately, and something has become increasingly apparent. Be it romantic comedy, action adventure, family drama, I watched them, all of them, with nary a twitch of the heart muscle.

If this were an isolated experience, it would be a bit weird, but it is -- almost without exception -- the rule as of late. What the hell happened? Did we forget how to make movies? Is this yet another indication of a society in decline? An impromptu straw poll taken among the filmgoers I know revealed that similar experiences being had by other people. "It's not just me, then," I thought. Nor it is cinema itself. I am happy to report that film still has the power to move mountains. In documentary world, I watch films every day that wrench my heart from my chest, throw it up in the air, punt it through the goal posts, and leave me soggy with tears, raging with blind white fury, or marveling at the sheer glory of the world.

All is not darkness in the narrative world; there were a number of excellent films released this previous year: Jane Eyre, Attack the Block, Bridesmaids, Hugo, Tree of Life. Even the Rise of the Planet of the Apes had some zest to it. So, it's not the movies, per se, it is the system that creates them. The question becomes: is the consistent blandness of mainstream cinema purposeful and if so, what does it serve. Why is there is no there, there?

Whether it's about sedation, reification, or consumerist driven fantasia, it's getting to the point where the entire apparatus seems irrelevant. I feel myself descending into old fogey ranting, waving a cane and adjusting my wig, but nevertheless, something is different, something has changed.

In the case of films such as Mission Impossible or Sherlock Holmes, which are, in effect, live action cartoons, this lack of feeling makes a certain amount of sense. Clunky old emotion simply clutters stuff up and gets in the way of constant motion that is the only energizing force that these films have.

Without constant explosions, fistfights, car chases, foot chases and Tom Cruise in bicycle shorts swinging through the air with the greatest of ease, there isn't much to get excited about in Mission Impossible. The film is one long chase sequence, which after a time is simply exhausting, not just for the audience, but seemingly for the actors also. Despite his wavy locks and aging little boy good looks, the hero of the series, one Ethan Hunt, doesn't seem all that hot to trot anymore. Cruise has thickened over the years, and there is a sludgy quality to his emoting that makes it seem like he is walking through thick wet ground to get to the end of the film. The zippy doodle pinhead antics of jumping up on the furniture and toothy mania seem far away now. Mostly he seems a little bored or sad. Either way it lends a leaden quality to a film that purports to be all about adventure.

If Mission were yet another example of a big expensive movie, with nothing at its core, that wouldn't be all that surprising, but it is also director Brad Bird's first live-action outing. For this reason alone, I had some hopes for something different. Mr. Bird is an animator extraordinaire, and the director of some of the most moving animated films I've ever seen. The finales of both The Iron Giant and Ratatouille move me to tears each and every time I see them. The man knows how to tell a story with genuine heart and feeling, so it is interesting to see him saddled with the clunky old plots devices that stud Mission like a fruitcake.

In a few places, Bird's swinging style comes zinging through -- Mr. Cruise hanging upside down from the world's highest building is nice enough. But there are precious few bits that raise the old blood pressure, much less eke out any actual emotion. The film clanks along on square wheels, like some left over cold war relic. Indeed the central plot point of imminent nuclear disaster (nukes, do we still have to worry about those?) seems something that old James Bond would have to contend with. The film's Scooby Doo denouement seems especially goofy: all's well that ends well, the gang is all in one piece and sharing a little laugh and some Scooby snacks at Granville Island Market, before heading out to the next sequel. Sigh... What happened to Brad Bird, the man capable of mixing emotion, character and action into a tasty stew?

Watching films that are supposedly dealing with weighty emotional matters -- death, addiction, betrayal, etc. -- this lack of feeling is more pronounced. I watched with total befuddlement George Clooney waffle and whinge his way through The Descendants. Clooney plays Matt King, a 40-ish father and husband, whose family owns a large section of unspoiled Hawaiian waterfront. As a lawyer entrusted with the stewardship of a multi-million dollar property, he has the final decision about what to do with the virgin land. Developers are lining up, bags of money in hand, waiting for the opportunity to turn wilderness into luxury resorts and gold courses. In addition to real estate matters, Matt is also dealing with problems on the home front. His wife is lying in a hospital bed, comatose after hitting her head in a boating accident. Despite the withering of their relationship prior to the accident, it is the news that his wife was having an affair that sets Matt in motion. With his two daughters in tow, he attempts to track down the man who turned him into a cuckold, a smarmy real estate agent, naturally enough, named Brian Speer.

Matt's quest to confront his wife's lover is essentially the entire plot, but the film takes its own sweet time getting to an emotional punch line. When it finally does arrive, nothing much happens. If we are meant to feel any genuine sympathy for Matt and his kin, empathy is undone by the fact that these characters are obscenely privileged, insanely wealthy and fabulously good-looking to boot. This family has no real issues, until one of them falls on their heads and dies. Maybe this sounds a bit callous; a mother dying and leaving her family behind ought to be a tragic situation, eliciting some minor bit of feeling, but the mother in question is only a blank slate, available for her family to project upon her their own grievances. As her family wanders about one of the most beautiful places on earth, half-heartedly staging a confrontation with the philanderer in question, it's easy to forget that there is really anything at stake at all.

Against a backdrop of fancy resorts, gorgeous Hawaiian beaches, goddamn paradise, the Kings mope about. If ever there was a poster child for white-people problems, here it be. The limpness of tone, the flaccid solipsistic ennui, the lack of anything even approaching energy is enough to make you want to blow some shit up, just to inject a little juice into the proceedings. There is a feebleness on evidence here that is perhaps supposed to engender sympathy, but the pathos is as unearned, as the billion-dollar property Matt inherits. The film possesses a deadening passivity that speaks about a culture run aground from pure ease of living. Here the pain of death can be soothed with some TV and ice cream. I refuse to identify with these characters and I refuse to feel sorry for them. So where does that leave me?

The Descendants is being touted as one of the better films on offer this year, and this confounds me. The fact that real estate deals provide the only genuine drama here should tell you something. But it also indicates something more insidious, a cinematic relativism. The Descendants might look reasonable in a year when the competition is thin on the ground, but that doesn't actually mean it's any good.

In this era of diminishing returns, end-of-empire period, all parts and parcels of culture seem geared largely towards one end. My mother terms it mind control, and she is probably not far from the truth. Movies are just one small signifier of a larger movement in time and history. Increasingly they simply feel like a distraction from the real forces at work, behind the screen. Read this and tell me it doesn't sounds like the great film plot ever devised.