The "New Burlesque" is bringing sexy back, but did it ever really go away? In Vancouver, the number of girly girls who come spilling out of burlesque classes and then out of their clothes strains the boundaries of good sense, not to mention stage time. So does every woman secretly yearn to strut about covered in bubbles and sequins? 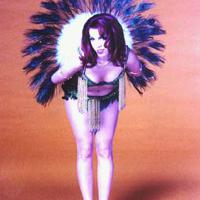 Doh! I Could Have Been a Fluffgirl!

Mathieu Amalric's film Tournée (On Tour) playing at Vancity Theatre won't necessarily answer such questions. It is a French film after all, filled with regret, cigarette smoke and a certain je ne sais quoi. The film may, however, swell your curiosity (along with a few other things) about the nature of this particular art form.

The film features some of the most prominent practitioners of the art of the strip tease, including Mimi Le Meaux, Dirty Martini and Evie Lovelle. It's been a long time since such fleshy female bodies have been seen on screen, complete with swelling hips, lush soft bellies and big old bouncing breasts. It's like so many Venuses of Willendorf hoofing it on stage, bedecked in feathers and glitter. There is even a man in the henhouse, one Roky Roulette, whose déshabillé Sun King routine must be witnessed to be believed. The film won the FIPRESCI award at Cannes this spring, so its pedigree is assured, but what it actually is attempting to say is perhaps less clear.

The story is simple enough -- Amalric plays Joachim, a would-be impresario returned to his home country of France to remake his reputation on the naked bosoms and bottoms of a troupe of American dancers. To the garage band screaming of The Sonics' Have Love, Will Travel, the troupe meanders along from town to town, collecting experiences that bear a resemblance to their stage acts, equal amounts of sexy sass and the ridiculous.

With its semi-improvised feel, On Tour often feels like a series of episodes, strung like beads on a string. Each one is a perfectly small perfect bijoux, but collected together, they begin to create genuine and tattered glamour. In a series of late night hotel lobbies, early morning train rides between dumpy French towns, the life of touring performers is given a fully fleshed existence; you can almost smell the stale champagne and old cigarette smoke rolling off the screen, a palpable funk composed of raunch and sadness. As the raggedy bunch travel from town to town, jiggling for the locals, Paris, that old showboat, glitters in the distance.

Despite the swinging tasseled boobies and ample amounts of female flesh on display, it is Joachim who is really the star of the show, and he never even has to take his clothes off. On stage and off, Joachim (and to an even larger extent Amalric, as the film's director) is calling the shots. In this, it's the same old song and dance. The film alludes obliquely and occasionally directly to this aspect, even as the women maintain throughout that it is their show. But is it really?

As Joachim ushers the dancers to bed, bribing them with champagne, herding them like so many cats on and off trains, from gig to gig, the joke is that this would-be Svengali is really only a puppet of pussy power. But the filmmaking tells a somewhat different story. All of the burlesque performers in the film are exactly that, real risqué dancers; their routines are equal parts titillation and humour. Unfortunately, this doesn't mean that subtle thespian moments are their forte. In this, it often seems that Amalric is in another film entirely. The man can act, and he acts complete rings around the rest of the performers.

It is a pleasure to simply watch Joachim's darting eyes and strained forehead, squeezed into states of frothing fury and anxiety-driven flop sweats. He virtually reeks of desperation and pathos. Next to his tour de force, the other performers, despite the fact that they're often buck naked, pale in comparison.

'What Colette was trying to do'

But perhaps the women have the final laugh.

In an interview with the Hollywood Reporter about the film, Amalric stated that his inspiration came from a piece of writing from Colette, France's most infamous celebrated writer, who was occasionally herself something of a burlesque dancer. Said Mr. Amalric, "I was looking for something contemporary that resembled the freedom that she [Colette] had, but I didn't find it. Then one day, I saw an article that talked about the American New Burlesque movement, which I wasn't very familiar with. I found a link between the two. I saw that it was close to what Colette was trying to do."

There is nothing new under the sun (king). What Colette set about exploring more than 100 years ago -- men and women, sex and love, freedom and loneliness -- still holds the same level of fascination. Even the clash between French ennui and American bravado is a classic trope, embodied physically, sometimes very physically, in the characters of Mimi and Joachim.

If there is one thing that this film nails, it is the precisely the intersection between those two nationalities. A good example is a scene when Mimi picks up a young French computer technician in a hotel bar. When a wedding party being held at the same hotel erupts into a brawl, Mimi and her beaux retreat to the safety of washroom stall, where the young man suffers his own eruption, a tad prematurely.

Like a sensible woman, Mimi makes the best of the situation, shoves his head between her thighs and yodels like an alpinist. Another, altogether more French encounter, takes place between Joachim and a female gas bar attendant. While paying for gas and cigarettes, Joachim is offered something else entirely gratis. The gentle shock and gratitude in his eyes speaks volumes about the ephemeral and often surprising existence of desire. As elegantly danced as any gavotte, this scene is a miracle of lightness and unspoken allusion, so gossamer that it dissipates on the night air, with a long last glance. It is lovely moment, easily offered.

Like any good strip tease, there must be a final payoff, and that moment finally arrives, when the growing attraction between Mimi and Joachim comes to a head. The love/hate between the pair has slowly blossomed through sideways moments, such as Joachim watching the blond diva from behind the backstage curtain, his eyes saucer big, or late night spats in hotel hallways. As attraction swells into direct physical confrontations, some pushing, a few slaps, and biting words, the inevitable looms on the horizon.

This is a battle of equals. A bottle blond diva meets her reedy French Svengali. But beneath the blood-red lipstick and the threadbare velvet suits, these two fragile souls, each locked into solitude and loneliness, are looking for the same thing. When the moment of respite arrives, and the masks fall away, the softness of vulnerability and gentleness ends in an abandoned seaside hotel on the coast of France. Mimi's tousled hair and softened mouth, the hard red lipstick wiped away from kissing, are far more lovely than her shellacked stage persona. But the show must go on, and even as Joachim and Mimi are collecting themselves, the entire troupe arrives and breaks out the booze and a few other things.

If the film has no greater meaning than the hoary notion that all life is a stage and the men and women merely playing around on it for a while, before they too waft away, like so much smoke, maybe that is enough. Mortality clings to the film, the underside of the iceberg, the slackening flesh of the aging queens, and it is this quality of sadness gives that gives desire such a razored edge.

Even as we're busily rolling around together, teasing, playing dress up, acting our parts, we're holding a candle against the encroaching darkness, that slouches closer with every passing day. The least we can do, is do it together.