MTV saw my "Spiders On Drugs" clip and called from New York to ask if I wanted to make a series of "nature shorts" for them. With my history of biting off the hand that feeds me I was extremely skeptical about working with a mega-corporation, so I made outrageous demands: cash up front, creative freedom and flexible delivery dates. They went for it. Ironically, they were great fun to work with. 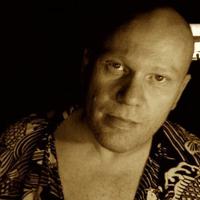 My producer was a cheerful fellow called Dave, who was like a cleaner from the mob in that he made problems go away. Need the rights for a Duran Duran hit? Done. Archival footage from Getty? Done. But mostly we talked about Kubrik movies.

The big problem I faced creating the series, which I called Hinterland Tales, was that I didn't have a series of ideas. Just one. And it involved bears.

Specifically, it involved a study I read in Scientific American debunking the myth that bears hibernate; actually they fall into a profound slumber, from which they occasionally awake to forage mid-winter. That got me thinking.

In addition, I had practical experience with bears, having been treed by a grizzly up North, and frequently raided by a black bear during my first winter homesteading in the woods.

One night I came home to find that the critter had washed down a pound of espresso coffee beans with a gallon of extra-virgin olive oil. Messy. To stanch the pillage I installed a hatch, because local wise guy Brian Kimola told me bears wouldn't dislodge anything over their heads. It worked.

All this practical experience convinced me bears would be much harder to corral than spiders. Fortunately, various Tofino friends now run bear watching boat tours. When I told MTV my plan they tried to hire one of the bear watching outfits for a whole day, plus everyone on the hill behind Rollie Arnett's boat shed, and sign them all to draconian contracts that guaranteed we got bear footage.

My plan was simpler. I bought a bottle of wine for my friend and hung around the dock until a tourist didn't show up for his bear watching cruise. I got so close to those critters I could have patted them on the head.

When MTV saw the footage they were horrified. Dangerous activity releases were faxed like snow. Meanwhile, I shot the disembowelment scene by using the bear skin from the back of Lana Gisbon's couch like a giant puppet.

Amazingly, this guerilla film technique worked. Now all I needed was a second idea.