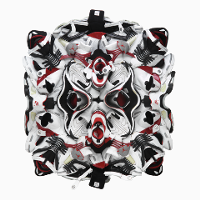 Aboriginal Art Turned Inside Out

At Blue Quill Residential School in Alberta, Bill Quinn prayed 16 times a day at the age of seven. He kneeled on the floor seven days a week saying 50 Hail Mary's. But he never learned to read or write.

Aboriginal Art Turned Inside Out

Now in his 70s, Bill's seen a rough road. He's run the gauntlet of west coast Indian stereotypes: alcoholic at 16, addicted to heroin by his twenties, living in the Downtown Eastside for 40 years. Unlike many, though, he turned himself around. In 1972, Bill took his last hit of heroin. Twenty-eight years ago the last drop of alcohol touched his lips -- lips that still speak his native Cree language. He has learned to read and write.

But many didn't, he says, which is why he decided that the history of his people might be better portrayed on walls rather than in the pages of a book.

Earlier this summer, Quinn's collection of artwork, "From Buffalo Meat to Baloney", was shown at the Carnegie Center on Vancouver's Downtown Eastside. The collages mix found commercial images and printed words, dream visions and seductive murmurs from the advertising world, to create what a friend of Quinn's, photographer David Campion, describes as "some kind of 21st century version of Plains Indian ledger art, a graphic art form created by Aboriginals in the 1800s."

The title "From Buffalo Meat to Baloney" describes a transformation familiar to many First Nations communities and to Quinn himself. Before residential school, he was raised by his grandmother, a strong, independent woman; "a survivor," Quinn says. She hunted on the Albertan prairies for her family. Now Quinn sits in the cafeteria of the Carnegie Center, picking away at a pre-packaged fruit cup reminiscing about feasts of wild duck and game. Behind him another native man unwraps a brownie.

Quinn says he hopes the exhibit shows natives and non-natives alike the history of what brought his people to the place they are today. "So much myth has gone into the civilization of the native world."

'This is what happened'

"There's a lot of damages going on here on a daily basis," he says. "The drug addiction is sky high. Twelve, thirteen, fourteen-year-old girls that are prostitutes. This stuff didn't happen 600 years ago," he says, squinting out the window through his tinted glasses onto the streets of the Downtown Eastside.

"I just hope that all natives all join forces and try to build a better future for our future children. I wouldn't want to see them in 70 years still struggling the way we're struggling."

And when people 70 years from now, or today, look at his artwork, what does Quinn want them to see?

"This is for the purpose of healing," he says. "It's not for a revolution, or making noise. It's just to say this is what happened. You're not guilty."