Every day you managed to insult the electorate with a barrage of hubris and political bullshit.

Now we know what it must have been like to be a Wendat (Huron) in New France being lectured by another damn superior Jesuit.

Political scientist Duane Bratt defined the experience precisely: “Kenney has only one tool in his political tool box and that is a hammer and everyone else is a nail.”

You hammered health-care workers when they criticized your appalling incompetence during the pandemic.

You hammered ranchers and your own rural base when you brazenly defended open-pit coal mining in the Rockies.

You hammered environmentalists for exercising their rights to question the dysfunctions of a petrostate in a time of climate change.

You hammered university funding for being the source of unwanted ideas.

Hell, you hammered anyone who didn’t agree with you. Or challenged your authority.

It wasn’t enough to disagree with your critics. Your party stalwarts had to attack them, remove them from office, harass them online or disparage them in print.

And when it became clear even your own party was worn out from all that pounding, you couldn’t even resign with a modicum of grace.

For months now you lectured Albertans how the leadership review process would work. Your disgruntled membership would send in mail-in ballots because you didn’t want to face a hostile crowd in Red Deer. You changed the rules repeatedly.

You then set a very low bar which remains a consistent hallmark of your administration. You argued that a 51-per-cent approval vote made a “constitutional majority” and that’s all you needed to continue on your crusade of hammering more Albertans.

And then you shocked observers by changing your own rules once again, thereby becoming the George Costanza of Canadian politics. "What quit? Who quit?"

When just 51.4 per cent of 34,298 members casting votes approved of your leadership, you announced that number wasn't good enough. You pouted as one not adequately appreciated and said you “intended” to resign.

Everyone assumed, as any normal person would, that resigning meant, well, resigning, and letting your caucus party pick an interim leader.

But that’s not your histrionic style. After a brutal caucus meeting you emerged once again as “the boss” until a new leader is chosen and all for reasons of “continuity and stability.”

You then had the gall to portray yourself as an eternal victim on Edmonton radio: “I won a million votes in 2019, and 16,000 people forced me to resign.”

Your long-predicted political demise, of course, has elicited much commentary. Conservative pundits typically blamed the COVID pandemic for sowing populist divisions in an unruly party. Don Martin, a former colleague, even suggested that you deserved a better political death.

But nothing could be further than the truth. There are good reasons why you are so disliked by the populace and they deserve a cursory review.

How to dismantle a province

In 2017 you, an Oakville boy, waltzed into Alberta and pretended to belong. Your admitted lodestar was the New York-based Manhattan Institute, the right-wing think tank founded by a British advisor to Margaret Thatcher and funded by the Koch brothers. Their "dark money" supported America’s radical right which served, well, the Koch brothers and their bitumen interests.

You assumed Albertans would be fooled by your pathetic props of a white cowboy hat and a blue truck. You then, by hook or crook, cobbled together two warring parties, the Wildrose party and the Progressive Conservative party, to serve your political ambitions. An RCMP investigation into voting shenanigans during the United Conservative Party leadership campaign remains on the books and incomplete.

You then recruited yes men like Jason Nixon and Tyler Shandro as candidates. As deputy premier and environment minister Nixon not only championed foreign-owned coal mines in protected areas, he swore at the Speaker like a street thug.

Tyler Shandro, of course, turned the Health Ministry into a battleground against doctors. His conduct is under investigation by the Law Society of Alberta.

During the 2019 election your political oratory of blame and outrage convinced Albertans that their political class long ruled by conservatives (who failed to conserve) wasn’t responsible for mismanaging the province’s oil wealth.

Instead, of course, Alberta was a victim. Somehow Trudeau Liberals and environmentalists had conspired to ruin the province.

In truth the petrostate of Alberta had not diversified its industry nor its tax base. Nor had it prepared for oil price volatility. But you stirred the pot of irrationality, resentment and mendacity so expertly, and all for your own political gain, that insurrectionists now drive around Alberta with “Fuck Trudeau” flags and think that’s the new normal.

After feeding such dark politics, you did not expect the same genie of discord might want to screw you, too. And it did.

You forgot that you reap what you sow in politics as in life. Unfortunately, Albertans and Canadians will have to live with the messy consequences.

A master of modern mendacity

As for your leadership qualities, you had none. You made a great Harper foot soldier, but the ability to rally followers down a difficult but true path is alien to you. You talk and walk like a boss with a carefully orchestrated top-down agenda. You can’t listen, and you are too old to learn. You are all hat and no cattle.

As a consequence you served the powerful and the rich in a dysfunctional petrostate. You reduced taxes for oil companies, which then cut jobs or left the province. You created a Russian-style propaganda agency for oil that made the province a laughing stock.

You tried to make us believe that destroying the Rockies and its precious watersheds with a string of open-pit coal mines sponsored by Australian billionaires was just another case of “responsible resource development.”

And then you offered more mendacity. You characterized opponents to open-pit coal mining up and down the Canadian Rockies as effete urban snobs.

Yet the majority of working people opposed to the mines were rural Albertans and members of your own political base. You didn’t listen to them (your caucus members wouldn’t even return their calls) and that’s when your career foundered — in the foothills where people take water security, history and grasslands seriously.

During the pandemic you pissed off even more people with your side steps, missteps and lying.

In 2021 you declared the pandemic over and promised the “best summer ever,” but then you let COVID rip across the province while you vacationed in Spain. That pretty much sums up all anyone needs to know about your “leadership.”

But here’s the problem: you are a symptom of a greater malaise undermining democracies everywhere. Like the Trump-tinged Republican leaders in the U.S. you have fostered phoney debates about the roots of real challenges. You manufactured villains, propagated falsehoods and stoked grievances in order to stir divisions, all the while foolishly believing you could ride the tiger you fed.

By serving your powerful ego, you progressively lowered the bar, centralized power, reduced transparency and weakened democracy in Alberta. 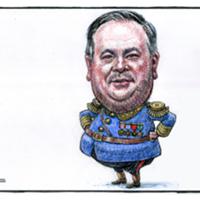 You dishonoured the province, divided its citizens, destroyed your own party, and pandered to the rich.

So Goodbye Jason Kenney. And good riddance. Go live a life, and gain some wisdom.

And remember this. There were two elections last week in Alberta. One concerned your deeply unpopular leadership. It attracted 34,000 voters.

The other concerned which bird should officially represent the city of Calgary. It collected 36,000 votes.

The winner was the black-capped chickadee.

The loser was you.