“These are extraordinary events,” Premier John Horgan said in declaring B.C.’s third state of emergency since the spring of 2020. “Not measured before, not contemplated before... there was nothing, nothing that could have been done [to prepare for] a three-times-the-historic-high volume of water travelling through Merritt in one day.”

And The Tyee’s Andrew MacLeod quoted Horgan as shocked, shocked by the storm: “I think all British Columbians fully understand that now we have to better prepare for events like this, but we couldn’t have even imagined it six months ago.”

Well, many of us have imagined and contemplated such disasters for years, but Horgan is politically smart to play dumb.

Human emotions, not logical reasoning, drive policy and politics. Most people in more-developed countries tend to be cheerful and optimistic, living in the moment, and skeptical about worst-case scenarios. They prefer to believe their finances will improve. They don’t like to think about their own inevitable aging and death.

The British historian Adam Tooze, in his new book Shutdown: How Covid Shook the World’s Economy, notes that no countries were really prepared for the COVID pandemic, and calls it “organized irresponsibility.” Though it had long been predicted, “there was no willingness on the part of those who could have afforded it to pay for genuine preparedness.”

The same is true of climate disasters. Horgan has been criticized because the government didn’t issue early warnings about the storm; he might be as fairly criticized for not having prepared for it years ago.

Politically, however, preparedness is a tough sell: you’re spending a fortune to prevent something from happening, or at least mitigating it. Never mind that, as Tyee writer Michelle Gamage recently noted, preparedness could save money.

Well, as Tooze noted, we all want to be prepared, but we don’t want to pay for preparation. A safer political response is to be endlessly startled. Even when disasters come within weeks of one another, each is unimaginable, “unprecedented,” “extraordinary,” “unforeseeable.”

After all, no one gets re-elected because nothing awful has happened. On the other hand, a prompt and dramatic response to disaster can keep a government in power, even if it must spend far more money than preventing the disaster would have.

So we can expect rapid aid to Fraser Valley farmers and homeowners, and crash programs to rebuild rail lines and highways. Horgan calls this “adaptation,” but our transportation system will remain where it is, exposed to future disasters. Drainage may be improved in places, and hillsides stabilized, but no one’s going to build a new Coquihalla over a whole new route.

Built by the Socreds in their glory days, the Coquihalla was extremely expensive, costing $955 million over its three phases. That’s about $1.8 billion in today’s dollars, and the cost was a political scandal — especially when the Socreds made it a toll road to help pay for it.

Just repairing the Coquihalla now will likely cost as much as the whole road did 30 years ago. (Contractors are calling the damage to the roads "unprecedented.)" Finding a safer route would only multiply the cost and take years to build.

If cost is a deterrent to preparation, so is the tendency of disaster survivors to repeat their errors. Those who lost their homes in the Fort McMurray fire often rebuilt on the same site, and homeowners who are flooded out expect to do the same. It makes a feel-good story about resilient folks bouncing back and overcoming disaster.

Insurance companies, however, are increasingly reluctant to cover fire and flood damage; their numbers were telling them about climate change decades ago. So insurers charge a lot for flood insurance, especially for property owners on flood plains like the Fraser Valley. (One B.C. insurer lets you estimate your present risk; sitting on a hill in Deep Cove, I’m relatively safe.)

Given the intense political and market pressure to build on flood plains, provincial and local governments offer “an integrated approach to flood hazard management.” Then they largely let the building continue.

Of course some properties must be on flood plains, especially farms, and deserve subsidized protection. But suburban sprawl is there because homeowners have more votes than farmers. Without the Agricultural Land Reserve, we would have flood-plain sprawl from the Fraser delta almost to Hope, and very few local food producers at all. 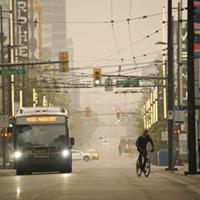 Politicians like John Horgan and Justin Trudeau understand this very well. They listen to the scientists, but they listen even more closely to their voters, who keep asking, “Can we go back to ‘normal’ now?”

Whatever nostalgic definition we apply to "normal," it no longer applies. To paraphrase Japan’s Emperor Hirohito in 1945 about the Second World War, “The 21st century has developed not entirely to our advantage.”

It’s time we recognize all the ways that is true, and tell our politicians that we citizens are ready to hear their expensive plans for helping us better endure the coming disasters we know are coming.

Enough with organized irresponsibility. Nothing should surprise us anymore.