If the air tastes different these days, it's because no humans until now have ever breathed air with 400 parts per million of carbon dioxide. By passing that number in January, we have created an atmosphere last seen on this planet some 2.5 million years ago, before modern humans evolved. 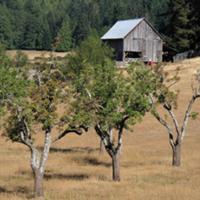 In Dangerous Times, Why Lower Our Best Defence?

We have, however, experienced the results of earlier temporary warming, created naturally rather than by pumping CO2 into the air. And we may well again within young Canadians' lifetimes.

The scientific media have been rumbling lately about an unwelcome new report finding: the drought in California, now in its third or fourth year, could be a "megadrought" -- a dry spell lasting 20 to 35 years, something not seen in North America since an 11th-century drought that caused the collapse of the Anasazi civilization in Arizona and New Mexico.

The report published in Science Advances in February makes discouraging reading for anyone who hopes to have children and grandchildren living in the second half of this century. The authors write: "We have demonstrated that the mean state of drought in the late 21st century over the Central Plains and Southwest will likely exceed even the most severe megadrought periods of the medieval era in both high and moderate emissions scenarios, representing an unprecedented fundamental climate shift with respect to the last millennium."

The authors go on: "Our results point to a remarkably drier future that falls far outside the experience of natural and human systems in western North America, conditions that may present a substantial challenge to adaptation."

Here on the Wet Coast, we might consider ourselves safely beyond such a megadrought, and a recent map published by the U.S. Drought Monitor seems to show southern B.C. mostly outside the "abnormally dry" conditions currently affecting northern Washington state. We're also not likely to face the "exceptional" conditions now afflicting California and Nevada.

But B.C. has indeed seen some astonishing droughts, especially during the so-called "xerothermic" (dry and hot) period when the last ice age ended between 7,000 and 10,000 years ago. A similar era tomorrow could change B.C., though not in exactly the same way.

Welcome to the xerothermic period

Southwestern B.C. once lay under an ice sheet one-and-a-half kilometres thick and heavy enough to depress the ground beneath it. As the ice melted about 13,000 years ago, the land rebounded. For some centuries, coastlines were uncertain and transient: sea levels were rising by many metres, drowning the newly exposed land, but the land kept rising.

Anyone who's seen land recently exposed by a melting glacier, as at Mount Edith Cavell in Jasper National Park, knows that it's not a very welcoming place for new vegetation. But as the glaciers left, lodgepole pines colonized southwestern B.C. beginning around 14,000 years ago.

We know this because modern researchers like Rolf Mathewes, a biologist at Simon Fraser University, have drilled into the beds of ancient lakes and found the pollen of lodgepole pine in abundance. Mathewes is a specialist in palynology, the study of the pollen and spore record, and since the 1980s he has used it to frame a surprisingly detailed history of climatic change in prehistoric B.C.

Up until 11,000 years ago, lake sediments were full of pollen from lodgepole pine, with increasing amounts of spruce and hemlock under a cool climate. At that point global warming increased worldwide, largely due to changes in the Earth's orbital position relative to the sun. The Northern Hemisphere in summer received eight per cent more solar input than it does today, and in winter it got eight per cent less. So summers were hotter and winters were colder some 8,000 to 10,000 years ago. The net effect was to melt the glaciers and boost summer air temperatures beyond today's averages.

As the B.C. coast became relatively dry and warm, the early forest of pine, spruce, balsam fir and hemlock suddenly gave way to disturbed forest dominated by Douglas fir and alder. Charcoal particles among the pollen grains suggest that fires were common in the hot, dry climate, favouring both alder and Douglas fir as fire-adapted species.

If the xerothermic period was dry, however, it didn't stay that way. Over a period of many centuries, Douglas fir declined in abundance, and increasing western hemlock and ultimately red cedar reflect a wetter climate between 7,000 and 4,500 years ago, leading ultimately to the temperate rainforest of today.

A modern xerothermic period wouldn't be precisely the same because we've already changed B.C. ecosystems, and today's warming has no predictable upper limit. Dr. Richard Hebda, curator of botany and earth history at the Royal B.C. Museum in Victoria, expects heavier coastal rainfall as the climate warms, but he's cautious about the details.

We have more people now, he said, so conditions are different and we make different demands on the landscape. B.C. will be disturbed in the coming century, but in a very different way from the xerothermic period. "If anything," he said, "the xerothermic is a conservative model."

He estimates that B.C. then was just one to two degrees warmer than in the middle of the 20th century. With current temperatures almost one degree warmer, "We're almost there now." But we don't know how much warmer it's likely to get.

B.C.'s xerothermic ecosystems were distributed differently than they are today, Hebda said. Interior forests were different, and grasslands were widespread; the Chilcotin looked like the treeless sagebrush country around Kamloops.

The Interior also saw less snow. "And that's already happening," Hebda said. "We're already seeing things that we might have expected in 50 or 60 years."

Fires were far more common in the xerothermic as grasslands and dry forests regularly burned. With little snowpack and warm summers, summer water tables were lower than today; Interior lakes dried out in summer and were often alkaline.

As a result, the Fraser River likely carried less water and many streams ran dry in summer as they do in California now.

Hebda said that if the rest of this century is like the xerothermic, we might expect spring runoff to come sooner, with the June freshet coming earlier or not at all. River flow on Vancouver Island and the Coast would depend only on rain, not snow. Coastal forest fires will be more frequent.

With more rain and less snow, Hebda sees problems ahead for hay production and tree fruit, which depend on irrigation. Okanagan vineyards need relatively less water, so they should do all right, but water levels in Okanagan lakes could fall with evaporation.

"The big challenge," Hebda said, "will be designing a world that's not reliant on steady-state conditions and can deal with uncertainty."

Another challenge will be coping with a mid-century economy that can't rely on endless cheap food from California. The Americans have foreseen major water shortages since the 1950s, when the U.S. Army Corps of Engineers proposed NAWAPA, the North American Water and Power Alliance. It would have diverted Alaskan and Canadian rivers south through the Rocky Mountain Trench in eastern B.C. and down into the U.S. to replenish the Colorado and other rivers.

NAWAPA went nowhere, but water exports from Canada to the U.S. remain a big political issue. We're happy exporting "value-added" water in beef, grain, plastic bottles and raw logs, but pumping water itself like so much oil really bothers us. Political pressure might change our minds, but a drought-stressed U.S. might not be able to exert such pressure.

Portents of war and disease

We already see the ominous portents of drought elsewhere in the world. From the Red Sea to the Atlantic, sub-Saharan Africa is retreating before the desert and its people are drowning in the Mediterranean trying to reach cool, wet Europe.

A recent scientific study suggests that the Syrian civil war and the rise of the Islamic State was triggered by drought, crop failure and mass migration that destabilized the Assad regime. If so, then more and worse wars could follow.

Outbreaks of infectious diseases anywhere in the world are likely to reach us easily. A report last fall by the Pacific Institute for Climate Solutions warned that "Vector-borne diseases -- those carried by rats, ticks, fleas or mosquitoes -- are most likely to be affected because climate change affects whole systems.... The bacteria responsible for Lyme disease are carried by ticks, and as temperatures warm ticks are moving north."

Meanwhile, an East African mosquito-borne disease, chikungunya, arrived in the Caribbean just over a year ago and has already sickened well over a million people from Florida to Paraguay. It's a cousin of dengue, also called "breakbone fever," which extends around the world.

To get a sense of where we are before the megadrought, visit Worldometers and check the ever-rising numbers for forest loss, CO2 emission, desertification, and use of water and energy.

Even if the xerothermic doesn't return in full force, we are already on the way to the fate of the Maya, the Anasazi, and many other societies destroyed by lack of water. They never knew what hit them. We, at least, will have the consolation of knowing what hit us.